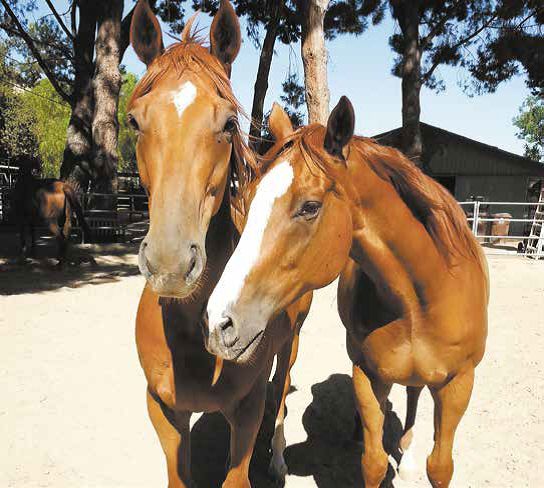 Farralone Farms is the equine division of Los Angeles Pet Rescue, an animal-welfare organization that has saved everything from sheep and mules to cats and guinea pigs.

Founded in 2008 by Saskia Chiesa, a longtime dressage competitor from The Netherlands, the
farm is a peaceful facility located in Southern California’s San Fernando Valley. Farralone Farms deals in all breeds but has had notable success with off-the-track Thoroughbreds. There
are 16 horses active in the program.

According to Chiesa, “We are all about the four Rs”—rescue, rehabilitate, retrain, and re-home. Many of Farralone Farms’ horses have been plucked directly out of livestock auctions. They are then brought to the Chatsworth-based facility, where they are carefully assessed and rehabilitated, receiving R&R plus veterinary and farrier care as needed.

Stallions generally will be gelded, teeth floated, and vaccinations updated as these horses are brought back to optimal health with plenty of good food and quality care. When ready, many will be schooled and retrained in preparation for the next phase in their lives.

Horses recently made available through Farralone Farms have included Grand Yule and Cyber Sam, both rescues from a California livestock auction. Grand Yule is a beautiful gray son of Grade 1 winner and sire Grand Slam and is out of a two-time Southern California winner; Cyber Sam is a 25-year-old daughter of champion Capote out of a Mr. Prospector mare. Both Grand Yule and Cyber Sam eventually fell on hard times before being sent to Farralone Farms as future companion horses.