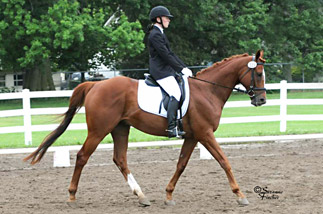 From Derby to Dressage!

This former Kentucky Derby contender now competes in dressage. Sam P is a 2004 Kentucky-bred gelding who raced in the 2007 Derby, coming in ninth. The handsome chestnut also made appearances in multiple other graded stakes races throughout his career, ending his racing days with three wins from 31 starts. After he hung up his racing shoes, the classy horse found himself in the care of New Vocations Racehorse Adoption Program.

“Sam” received the rest and retraining time he needed at New Vocations to learn how to succeed in his new life as a riding horse. He was adopted by Laura V. of Ohio and has since blossomed into a top-notch dressage horse. Laura worked diligently to make sure Sam received the care and training he needed to become his best self and the pair are now great partners, competing in dressage shows around the Mid-West and turning heads everywhere they go. Laura and Sam have also become New Vocations Ambassadors, “promoting ex-racehorses for careers beyond the track.”

Click here to read more about Sam P. and other former Kentucky Derby runners in the BloodHorse.

New Vocations Racehorse Adoption Program, based in Marysville, OH, works to provide rehabilitation, retraining, and adoptions for both Thoroughbred and Standardbred retired racehorses. Since its founding in 1992, New Vocations has been able to place over 5,500 horses into new homes and was accredited by the TAA in 2013. Learn more about the New Vocations program at: http://www.horseadoption.com/.