Fourteen years after her racing career ended without a victory, rescued mare Back to Front officially became a winner.

Competing in her first show since DNA testing reunited her with previous owner Michelle Macatee earlier this year, and ridden by Macatee’s 8-year-old granddaughter Rylie Beauchamp, Back to Front won first place in the Lead Line Walk class during the Skip Ahead Dressage Schooling Show Oct. 18 in Marlton, New Jersey.

As part of the Halloween-themed show, Rylie dressed as a princess while 17-year-old Back to Front – lovingly called “Bebe” by Macatee and her granddaughter – was fitted with a unicorn’s horn and rainbow stirrups.

“She learned how to salute the judge 10 minutes before her class,” Macatee said of her granddaughter. “The judge told her she needed to make her walk a little faster next time. After (the show), she showed ‘Bebe’ her ribbon and gave her a big kiss.”

Back to Front was relocated from the TAA-accredited Florida Thoroughbred Retirement and Adoptive Care facility in Indiantown, Florida to Westhampton Farm in Bergen County, New Jersey in June of 2020, after Macatee discovered her on the Florida TRAC website. Macatee had previously adopted Back to Front but life circumstances forced her to give her up in 2011.

“She was just meant to be back with me,” Macatee said. “I got her back. She’ll be spoiled rotten.” 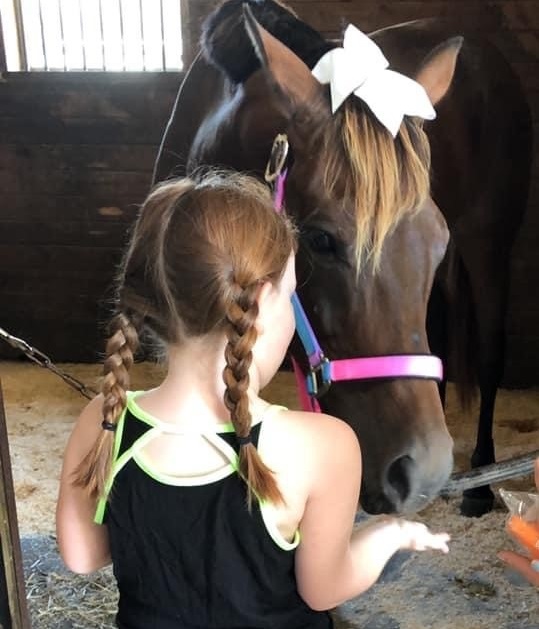