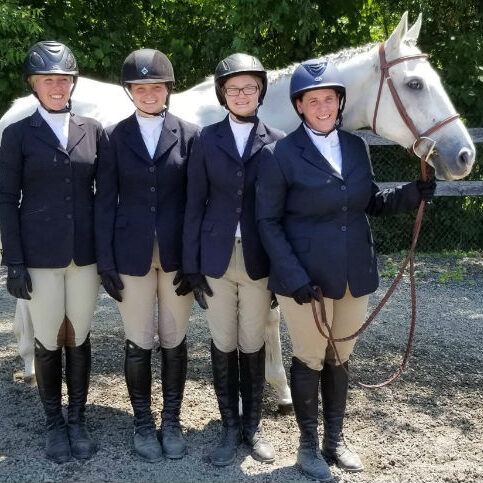 The idea started with a simple email from the Retired Racehorse Project about team competitions being offered at the 2018 Thoroughbred Makeover. But the seed was planted in Kelly Lasher’s mind and there was no slowing down.

“Emotion came first here, and logistics second,” she said. But then she had to put together a team.

“The team members I approached have various levels of experience,” said Lasher, who operates and trains out of Hunter Landing Equestrian near Blossvale, New York.

“Between these two young riders, I was confident as their coach that they could handle the challenges ahead while sharing the love and appreciation for the off-track Thoroughbred,” Lasher said.

The next addition to her team was Heather Moore, a seasoned equestrian who had lost her mare this past winter.

“Heather, with nearly 30 years of riding experience, not only demonstrated an incredible, above-and-beyond type of devotion for her horse, but also suddenly had a major piece of her life taken away, and something was missing. This was a perfect chance to help her fill that void and give her a chance to lend her experience for an exciting adventure,” the trainer said.

With Lasher completing the team as the fourth member, the next challenge was to find a horse. Already having a great relationship with Second Chance Thoroughbreds, Lasher was drawn to a grey horse named Cannot Stop.

“I think in many ways, ‘Stop’ found us, and not the other way around,” she said.

The New York-bred son of Alphabet Soup bounced around in claiming races for his entire 24-start career. After racing at Mountaineer in July of 2017, he was shipped to Puerto Rico. He made his last start Jan. 15, compiling a 1-1-1 record, before being retired through Caribbean Thoroughbred Aftercare. From there, he was transported to Stone Ridge Farm in Ocala, Fla. for a layoff before making his way to Second Chance Thoroughbreds in Spencer, N.Y.

“We went back and forth as a team on what to call ‘Cannot Stop,’ and while we all agreed that the name ‘Stop’ was a bad omen for a hunter or a jumper, it just stuck. He won’t stop. He cannot stop. He is a brave animal with a lot of heart, and a hurricane survivor,” Lasher said.

Officially starting the retraining process with Cannot Stop in May, Lasher said that the first few weeks were a bit rough—constantly cantering around on the wrong lead. But the gelding turned a corner and has been a rockstar recently.

“It is mid-July now, and wow, the transformation from then until now is incredible,” she said. “The daydream to compete ‘Stop’ in Kentucky is now becoming a reality, and he is making retraining very easy on all of us. He has been trail riding and to a couple off-site shows so far. (He) loves to jump, and is quickly turning into a second-career star. I think he is just trying to make us all look good.”

While Cannot Stop’s training progresses, his team is anxiously awaiting the first weekend in October. At the Thoroughbred Makeover, two team members will compete with ‘Stop’ on the flat and over fences, while all four must contribute to his retraining process.

But even after the Makeover is over, two members of the Cannot Stop team will continue the story.

“When ‘Stop’ is done competing at the Makeover, he will enjoy a lifelong companionship with Heather Moore, who fell in love with Stop through this process and officially adopted him,” Lasher said. “Stop came into Heather’s life at just the right time, and as she says, is her spirit animal. Until then, she will just have to share.

“Whether we show up and win the whole thing, or just have fun and run around like lunatics on the wrong lead, one thing is for certain—we share a mission and you Cannot Stop this awesome team.”