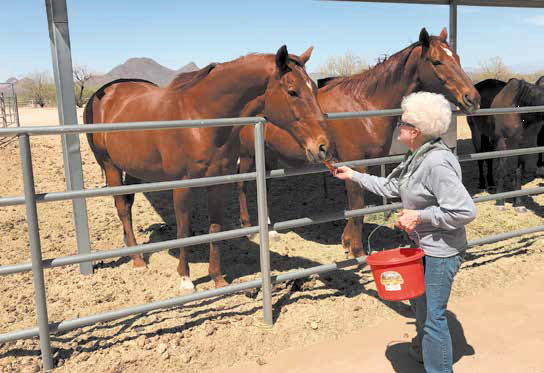 “We’re living a dream,” Dale Shirley told his wife, Patti, during their years of racing and breeding. That dream ended in 2002, when Dale died, leaving Patti Shirley, a noted Southwest-based conditioner, on her own with a 120-acre Arizona farm. Over time, Shirley’s goals changed, and another dream was born. By 2005, she had transitioned her Tucson property from a breeding and training facility into an aftercare farm, and Equine Encore Foundation began as a “Social Security system” for ex-racehorses.

The “birth announcement” of Equine Encore was made in the winner’s circle at Sunland Park, and within 24 hours, it had acquired Oh Gracie, a Thoroughbred with a slab-fractured knee. He arrived at the farm in 2005 and the now-25-year-old gelding remains there today.

“Racing is a business,” Shirley said, “and in business, when machinery no longer functions, you get rid of it. Here, we’re dealing with living creatures who have given us so much and ask so little in return. We need to step up and take care of our athletes.”

Equine Encore is funded through private, tax-deductible donations. Support can be given on a one-time basis or as regular monthly support.

“These athletes did their jobs, paid their dues,” Shirley said. “They deserve a dignified
retirement.”

Shirley died in September 2019 at age 74. Her passion and legacy live on through Equine Encore.