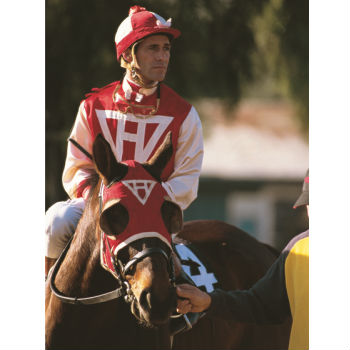 Fighting Furrari, better known as the primary horse used in the 2003 movie “Seabiscuit,” has been retired from his duties as Santa Anita Park’s mascot and has been relocated to TAA-accredited Square Peg Foundation in Half Moon Bay, California, which specializes in equine-assisted programs for children with Autism.

While the winner of just one of his 16 career starts on the track, Fighting Furrari was one of the most recognized horses at Santa Anita. Also known by his barn name “Fred,” the 21-year-old gelding has been tacked up in the authentic Seabiscuit attire and led to the infield round pen on weekends to the delight of fans. His handler would educate, answer questions, and allow people to pet him, watch him do tricks, and be lunged or ridden around the ring.

Over the years, when Santa Anita was closed for live racing, “Fred” would be turned out at a local stable under the care of Candace Coder Chew, Santa Anita’s Director of Print & Graphics and the President of TAA aftercare partner CARMA, the California Retirement Management Account, which oversees grants for Thoroughbred aftercare programs in the state, where he would be ridden on the trails and in the show ring.

“It is fitting that Fred will live out his days doing what he does best, taking care of young children,” Chew said.

“A few years ago, AbilityFirst came to Santa Anita with a number of autistic and Down syndrome children. In addition to all of the kids petting Fred and giving him carrots, one young boy got to lead Fred around the walking ring. With cameras flashing, the boy marched around that ring, talking to the horse the entire time. Later, we were told the boy was non-verbal, and that the horse seemed to connect with him on some level, encouraging speech. It was an incredible thing to witness—the almost ethereal connection between an autistic child and a horse. As Fred was getting older, Square Peg presents him with the best retirement possible as it will allow him to be lovingly cared for and to continue to do what he does best.”

Since 2004, Square Peg has used retired racehorses as therapeutic horses for children with variety of diagnosis, including Autism. Some of the horses are ridden, while others provide an emotional connection for the kids who may have never been exposed to horses. Fighting Furrari now lives on the beautiful hillside facility in Northern California with eight other horses, several cats, and a Bloodhound. He is adapting well and will soon have his duties defined.

Fighting Furrari landed his “Seabiscuit” role because of his remarkable physical likeness to the 1938 Horse of the Year. Like the original Seabiscuit, he also has always connected with the people around him. “Fred” earned less than $5,000 on the racetrack, but he was a champion in the show ring. In his younger years, he teamed with a young Randi Pomrehn, who campaigned him with much success in local shows, winning many jumping championships. A succession of female handlers attended to him at Santa Anita, and his duties included running with the winners of the Santa Anita Derby Day 5k, appearing at the Arboretum for orchestral performances, being featured in numerous movie and television shows, and greeting many different groups at Santa Anita.

Read an excerpt from his obituary from Square Peg below:

Fighting Furrari, one of the stars of Seabiscuit, was humanely euthanized on Tuesday, February 22 due to the infirmaries of old age. He passed away peacefully at his home of the last three years, renowned Thoroughbred aftercare charity, Square Peg Foundation.

“This horse meant so much to so many. His resumé was unparalleled and his ability to achieve all that was asked of him was remarkable, but his connection to those that loved him the most was truly a gift. He will be remembered fondly and with great respect.” Candace Coder-Chew, Seabiscuit (Fighting Furrari) manager.

His last three years were spent in lush pastures and a warm stall, visited daily by the children and staff he grew to love. Santa Anita and all of his many fans are ever grateful to Square Peg Foundation for their care and compassion for Paco, aka Fred, aka Fighting Furrari, aka Seabiscuit. He was a champion. 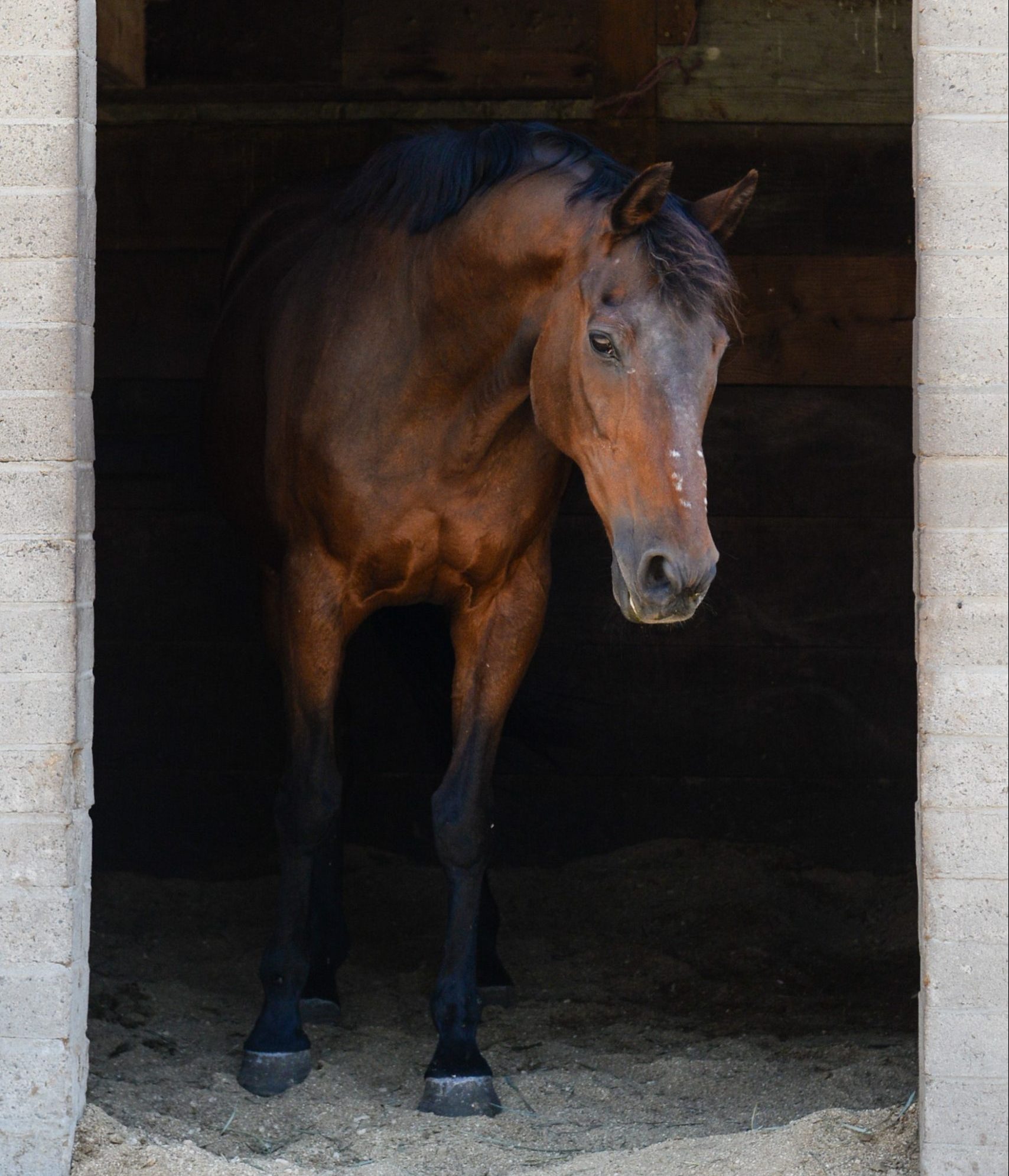