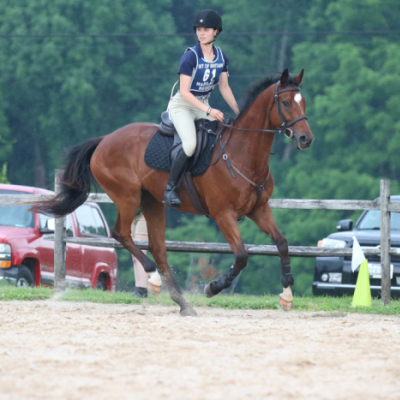 Like many junior riders attempting to prove their mettle, Caren was looking for a younger horse that she could make into her own.

Her mother’s “no Thoroughbreds” rule was thrown out the window after admiring the athleticism her instructor Jen Kraus’ horse, Decorated Admiral. And searching around for a suitable mount in their area led Mary and her daughter to TAA-accredited MidAtlantic Horse Rescue. Mary saw a horse online that she thought her Caren would like and wanted to see him in person.

Enter Great Norton. The Maryland-bred son of Great Notion retired from racing with a 1-1-4 record in 24 starts all at Charles Town, accumulating $42,116 in earnings.

At age 12, he was older than Caren was looking for and had a few quirks, but something just clicked with the pair once Caren hopped aboard.

“I trusted the mom intuition, and so we went and tried him out,” Caren said. “I just got on him and I was like, ‘He wants to do stuff. This is my horse.’

“He was just so brave, they had new jumps in the ring and he was like, ‘This is terrifying so I’m going to jump two feet over that’–and I loved that. He just tried so hard for me.”

In that try-out ride, her mother saw the immediate bond the pair had.

“I stood back and watched them work together, and knew this was the horse,” she said. “He had a big, energetic stride, was obedient, athletic, and sound, and was clearly very happy to be working. … but most importantly, I saw how his kind eye softened and glowed during their riding session. He liked her. It was as simple as that.

“(He) chose his kid, and got himself a new name, Mio, and a show name, Stranger than Fiction, in the bargain.”

Fast forward a few months from his adoption in December of 2017, and now Caren and “Mio” are planning to compete in the eventing division at the United States Pony Club Championships East in Tryon, N.C. They’ll be competing in the beginner novice level, just to give Mio as much experience as possible before moving up.

“I just want him to feel a lot more comfortable in an exciting show setting,” Caren said. “… I know that he’ll be taking in the atmosphere and not worry about the jumps so much. Long term, I just want to see what he’ll do, we haven’t really found a ceiling for him yet.”

But overall, she’s thrilled to compete on the back of a Thoroughbred.

“I’ve ridden so many Thoroughbreds and I love them all,” Caren said. “They just want to do stuff, they’re ready to go–that’s my favorite thing about them.”