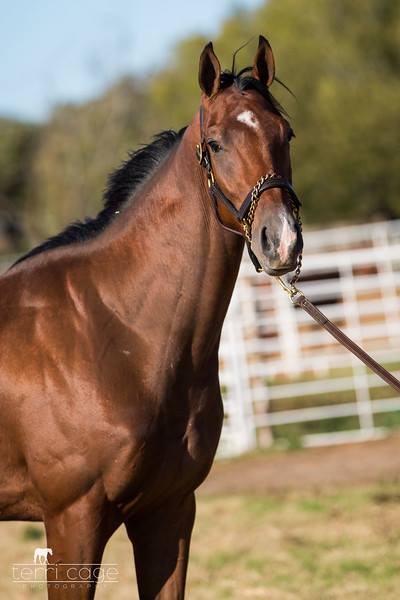 Master Tone is a 2012 Oklahoma-bred gelding that just did not want to race. He raced two times at Remington Park and the best finish he could muster was a fifth. His owner recognized that he was not competitive and chose to retire him as a two-year-old to Remember Me Rescue.

After arriving at RMR, “Master” was chosen to take part in the RMR-sponsored “Battle of the X’s,” an OTTB Trainer Challenge in which experienced trainers are partnered with one off-track Thoroughbred to work with for four months prior to the event. The trainers then compete to see which horse has developed the most in that four month period. After the competition, the horses are auctioned to approved adopters with proceeds of the event benefitting RMR.

Master was paired with trainer Lee Johnson of Tennessee as his “Battle Horse.” Because Master is still young and immature, Lee started his training by working to build the gelding’s rapport and communication with people and learning to respond to pressure and release. The trainer says that Master has three very nice gaits and is a great mover. Master started jumping over small cross rails, and Lee believes that the confident horse could excel in the hunter ring once he matures and develops more. He says of Master, “No matter what you’re asking of him… he’s trying to figure out what you want. He is the biggest trier I have ever met.” Lee also wanted to point out that Master is a huge “snuggler,” preferring human contact over treats.

Master Tone and Lee traveled to Texas this past weekend to participate in this year’s edition of the Battle of the X’s. The pair placed second in the Battle of the X’s against seven other horses- clearly all of their hard work and Master’s great potential shown through to the judges! Lee even showed off Master’s great skills of jumping bridleless! They also placed in every other class they entered in the regular portion of the show. The great gelding even caught the eye of guest judge Steuart Pittman, who publicly said that “he was one of the nicest young horses he’d ever seen.” Master rounded out his great day of showing by being adopted by Pat D. of Maryland. Master will now continue to mature and expand his training with his new riding partner with the plan of starting to show under saddle next year.

Remember Me Rescue is located in Burleson, TX and works to “rehabilitate and retrain ex-racehorses with the hopes of finding them new homes with responsible owners.” RMR was founded in 2008 and accredited by the TAA in 2014. Read more about RMR at: http://www.teamkeen.com/.

The Thoroughbred Aftercare Alliance (TAA) is a 501(c)(3) non-profit organization who accredits and funds organizations that provide aftercare for Thoroughbreds. For more information on the TAA, visit: http://thoroughbredaftercare.org/.