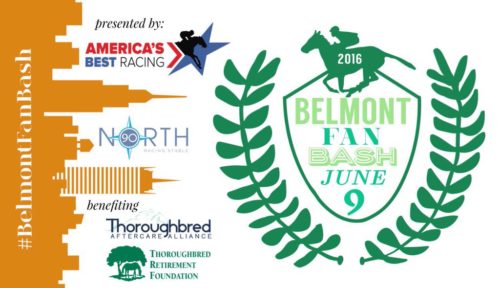 New York, NY – America’s Best Racing (ABR), a multimedia fan-development and awareness-building platform of The Jockey Club, today announced the second annual Belmont Fan Bash will be held Thursday, June 9, 2016, at 121 Fulton Street, an American bar and grill located in the heart of the Financial District in New York City. The Thoroughbred Aftercare Alliance (TAA) and Thoroughbred Retirement Foundation (TRF) will be beneficiaries of the event.

Launched in 2015, the Belmont Fan Bash was created to bring racing fans face to face with the personalities of Thoroughbred racing, including jockeys, trainers and owners. For the second consecutive year, the Belmont Fan Bash will be sponsored by Ninety North Racing Stable. The racing partnership has supported multiple ABR projects and campaigns since 2015.

Highlighted by the 148th running of the Grade 1, $1.5 million Belmont Stakes on Saturday, June 11, the oldest and most challenging leg of horse racing’s vaunted Triple Crown, the Belmont Stakes Racing Festival will feature championship racing, world-class entertainment and premium hospitality from Thursday, June 9, through Saturday, June 11.

All funds brought in through ticket sales for the Belmont Fan Bash ($15 in advance, $20 at the door) will be shared by TAA and TRF. Additionally, the event will feature a silent auction with racing memorabilia, upscale fashion items and exclusive racing experiences up for grabs.

“The care of our own retired racehorses is hugely important to us, so we are excited to team up with the TAA and TRF for a second year,” said Kathryn Sharp, chief operating officer of Ninety North Racing Stable. “The party was a huge success last year, and hopefully this year’s event will be even bigger.”

Based in Lexington, Ky., the non-profit TAA accredits, inspects and awards grants to approved aftercare organizations to retire, retrain and rehome Thoroughbreds.

“We are delighted to have again been named beneficiaries of the ABR and Ninety North Belmont Fan Bash. The event is a great opportunity to engage with guests, who run the gamut from racing personalities to new, casual and hardcore fans of the sport,” TAA Operations Consultant Stacie Clark Rogers said.

Founded in 1983, the TRF has served thousands of retired Thoroughbred racehorses. Most horses under TRF care are provided with a quiet retirement at pasture. However, hundreds of TRF horses have successfully been retrained and adopted out to homes where they began new lives as pets, competition horses, police mounts or equine-assisted therapy partners.

“We, at the TRF, are thrilled and thankful to be part of the 2016 Belmont Fan Bash. The crowd and this event are fun, relaxed and incredibly supportive of the TRF and its mission,” said Diana Pikulski, director of external affairs for TRF. “It is a special night in a room full of revelers who really love horses and make horse welfare a part of their Belmont experience.”

America’s Best Racing is a multimedia fan-development and awareness-building platform, initiated by The Jockey Club, designed to increase the profile and visibility of North America’s best Thoroughbred racing events, with a primary focus on the sport’s lifestyle and competition.  You can follow America’s Best Racing at americasbestracing.net as well as on social media platforms Facebook, Twitter, Pinterest, YouTube, Google+, Instagram, and Snapchat.

WHO: Open to all fans, horse enthusiasts and anyone interested in learning more about horse racing.