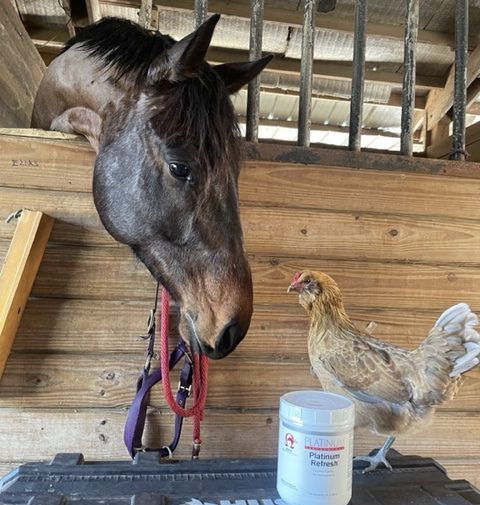 Secret Deployment was bred in Iowa by Burden Creek Farm and Clifton Farm, out of Donarra Thoroughbreds’ unraced mare, Capital Deployment. Secret Deployment made just two starts on the track–never breaking maiden–before his owners, Diamond D Thoroughbreds, and trainer David Tibbitts made the decision to retire him.

No stranger to Thoroughbreds in need of a new career, Nelda Kettles of Thoroughbred Aftercare Alliance-accredited Horse and Hound Rescue Foundation was more than happy to help when she got the call from Secret Deployment’s connections last April.

“Secret Deployment was donated to Horse and Hound from an Oklahoma ranch that trusts us to find second careers for the horses that don’t work out as racehorses,” Kettles explained. “He came in as a quiet, sweet gelding that obviously had no talent as a racehorse.”

Despite being the son of  Godolphin’s 2008 Eclipse Award winning stallion, Midshipman, Secret Deployment lacked interest in racing, and Kettles knew there was a job out there for him. She gave the then three-year-old plenty of time to adjust to life off of the track and grow into himself.

Once Secret Deployment was ready to return to work, it was time for the next phase of his journey– learning a new job with Horse and Hound trainer Jamie Jennings of Flyover Farm.

“He came off the trailer a cool character right from the beginning,” Jennings recalled. “He obviously had a good life and good experiences because he trusted everyone and accepted everything the first time, every time. He was just so laid back.”

The owner of Flyover Farm in Norman, Oklahoma, Jennings is also the host of a popular podcast, ‘Horses in the Morning,’ where she often discusses the Thoroughbreds she has in retraining from Horse and Hound that are available for adoption. Clearly Jenning’s tactics have proven to be successful, as of this month Jennings has officially helped to retrain 100 off-track Thoroughbreds (OTTBs) for Horse and Hound.

It came as no surprise then when Jessica Troup, a Facebook friend and listener of Jennings’ podcast, expressed interest in Secret Deployment, now known as “Ivan,” after an episode of ‘Horses in the Morning’ premiered.

“I’ve had listeners adopt horses from me in the past,” she said. “So, when Jessica reached out, I was happy to talk to her about Ivan.”

Troup was looking for an all-around horse with a good brain. She already had a trainer lined up, so all she needed was the right partner. Shortly after seeing Ivan online, Troup called Jennings to inquire and once she explained her goals for the future it appeared to everyone that Ivan could be the perfect fit.

“Jamie raved about what an amazing brain he has,” Troup recalled. “He took everything in stride with her and was willing to try anything– that’s how I knew.”

Of course, it takes more than a potential adopter’s hopes to make an adoption happen. However, once her application cleared and Kettles and Jennings both agreed she was the right home for him, Ivan was set to begin his journey from Jennings’ Oklahoma facility to Troup, who was located in Florida.

“I brought him home and he never balked or wasn’t willing to try something,” Troup said. “As Jamie [Jennings] put it, ‘He was never lied to,’ and it shows. Whoever had him as a racehorse trainer treated him well, and Jamie gave him an excellent education to go on to his career.”

Since arriving in Florida, Troup and Ivan have spent most of their time together working on the basics. Ivan’s trust in his new owner has helped him take to learning his lateral movements nicely and has increased his confidence and skill levels along the way.

“Simply put, this horse is incredible,” Troup gushed. “He is in a full training program, and he is so willing to work. You can tell he really enjoys it.”

Although he is still quite young, Troup has become more and more excited about Ivan’s future.

“We are working up the dressage training scale,” Troup said. “Since he’s so young, we don’t want to push him into anything too fast so we’re taking things slow– I hope maybe by summer we can enter into an intro dressage show, just to give him some experience going out.”

Ivan is over 1,000 miles away now, but it hasn’t stopped Kettles from keeping a close eye on the Horse and Hound graduate over the last nine months.

“They have turned into a great partnership, which is everything we want the off-track Thoroughbreds to achieve,” Kettles said.

Her initial faith in Troup has proven to be well-placed, as Troup intends to let young Ivan dictate his next course of action.

“We will see what he likes best as we continue and take direction from him,” Troup explained. “When he’s old enough, he will learn to jump, so if he likes that maybe we will try hunters too. I’m just happy to have a best friend to do fun things with again.”