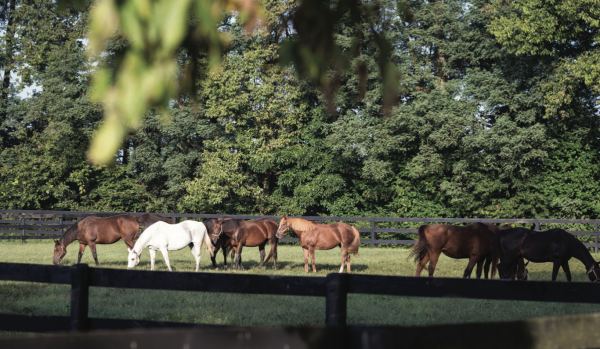 Established in 1924, Mereworth Farm was a prominent racing and breeding operation that now provides lifelong care for horses under the direction of the Susan Donaldson Foundation. Credit: EquiSport Photography

Set on 1,200 acres in the heart of horse country, Mereworth Farm has been steeped in the rich tradition of Thoroughbred racing and breeding since its inception in 1924.

Established by New York real estate mogul Walter Salmon Sr., the farm was originally created for Salmon to expand his Saratoga-based racing string and try his hand at breeding. Mirroring his success in real estate, Salmon had many accomplishments both on the track and in the breeding shed, winning the 1923 Preakness Stakes with Vigil and the 1926 and 1929 Preakness Stakes with two Mereworth-breds, Display and Dr. Freeland. In the early 1930s, Salmon retired his racing silks and focused on honing his skills in breeding, putting Mereworth solidly on the map as a producer of top-quality racehorses.

Upon Salmon’s death, the management of Mereworth fell to his widow, Elisabeth Davy Salmon Gillet, and son, Walter Salmon Jr., who eventually returned Mereworth-bred horses to the track. Constantly vigilant about proper horse care, Walter Jr. was heavily vested in cutting- edge research on equine health and welfare; he served for years as president of the Grayson-Jockey Club Research Foundation, an organization that funds veterinary research for the benefit of all horses.

Upon his death, his daughter, Susan Salmon Donaldson, acquired the farm from his estate in 1986. Susan also had racing and breeding success under the Mereworth banner until her passing in 2011, when she bequeathed the farm to a foundation she established in 1989. Continuing her family’s legacy of commitment to the care of horses, the foundation’s mission is to provide lifelong care for unwanted horses that would otherwise be threatened with euthanasia because of injury or old age.

Since 2011, the Susan S. Donaldson Foundation has worked tirelessly to restore and upgrade Mereworth Farm to fulfill her vision, renovating pastures and paddocks, replacing fencing, and renovating barns and other buildings. The driving force behind the restoration process was farm manager James T. Boyd and the Mereworth Farm staff, many of whom worked with Susan Donaldson throughout her tenure as farm owner.

Though its racing days may be over, Mereworth Farm still pays homage to the athletes that helped build it by caring for Thoroughbreds and horses of other breeds in need of sanctuary. The nearly 170 horses housed on the farm live out their lives in large pastures, under the watchful eye of Boyd and the Central Kentucky Veterinary team.