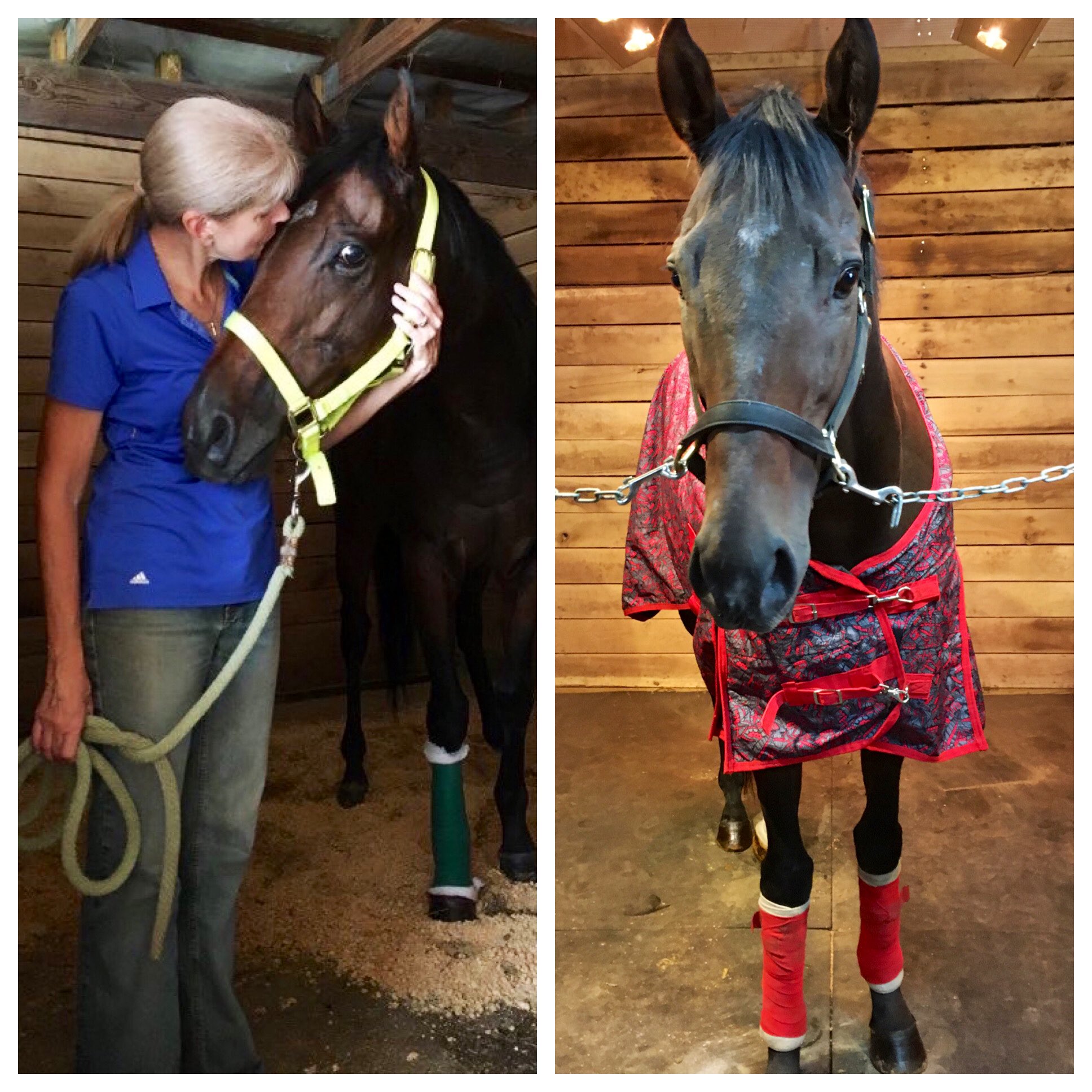 Willingness to adapt to new surroundings and challenges is a hallmark of any successful athlete, equine or human. Uno Mas Modelo embodied that sentiment in a racing career that spanned 2015-19 and produced double-digit wins.

The Kentucky-bred son of Macho Uno, retired this year by Ron Paolucci Racing, produced consistent efforts at tracks across the country as he rose from claim to fame by winning a quartet of stakes races late in his 35-race career. The bay gelding posted a 10-5-1 record, mixing quality and quantity, compiling wins at five tracks in four states.

After registering a successful stint as a claiming horse who won at least one race for his first three trainers, Uno Mas Modelo came into the care of conditioner Anthony Quartarolo in 2018. The move resulted in a late-career resurgence, with all four of his stakes wins coming between 2018-19, when Uno Mas Modelo was 5 and 6 years old.

“He could win anywhere, he was a runner,” Quartarolo said. “We put blinkers on him and did some little things and he just turned it around. He got good and stayed good. He just kept winning. I love that horse. I love all my horses but he’s special. He’s a neat horse. To get good like that, he makes you look good as a trainer.”

His 5-year-old season also saw Uno Mas Modelo make an impression on New York fans, winning both of his 2018 starts at historic Saratoga Race Course before logging scores in the Bet on Sunshine at Churchill Downs, then finishing seventh in the Jockey Club Gold Cup Stakes (G1), and closing his campaign with a win in the Claiming Crown Rapid Transit at Gulfstream Park. He racked up two more stakes wins in Florida in 2019, taking both the Perseus and Rough and Ready. Fittingly for a horse who improved with age, Uno Mas Modelo ended his career with his second grade 1 appearance, running 10th in the Churchill Downs Stakes (G1) going seven furlongs in May 2019.

On the track, a 7-year-old Thoroughbred such as Uno Mas Modelo is a respected old-timer. But as a horse, he is in the prime of his life with his breed’s average lifespan between 25-28 years. With all his strength, intelligence, willingness and experience, Uno Mas Modelo just needed a new outlet to begin his career’s next phase. 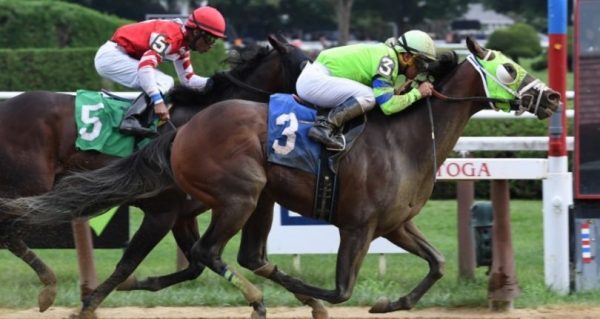 Racing For Home, a non-profit charity for off-the-track thoroughbreds, is providing support for Uno Mas Modelo’s new career. Founded in 2010 by NYRA television analyst Acacia Courtney, Racing For Home’s mission is to rehabilitate and re-train racehorses for a second career. Run by Courtney and her mother, Sherrie Courtney, the organization was accredited in 2019 by the Thoroughbred Aftercare Alliance, making them one of two such facilities in Connecticut and one of 81 accredited organizations throughout North America.

Located in Ellington, Connecticut, Racing For Home provides Thoroughbreds with a structured and goal-orientated routine—similar to what was used during their racing careers—to transition to new vocations, which can include a new path as a show horse or preparation for adoption. The organization also provides a sanctuary for horses who were injured during their careers and physically cannot have a second career.

“They thrive on routine and having a job. They are bred to fill a purpose,” said Courtney, a key member of NYRA’s America’s Day at the Races broadcast team. “They can get bored, so giving them a new career, especially for horses just off the racetrack, is very important. Having a job, mentally, does so much good for them.”

Courtney said there are currently 11 off-track thoroughbreds (OTTBs) in their care, with Uno Mas Modelo among the latest additions. The veteran horse last breezed in May at Churchill Downs and when his racing career concluded due to injury, Quartarolo’s daughter, Ashley, reached out to the Courtneys about finding a new role for a talented horse who had banked nearly $400,000 in career earnings and won as many as five races in a single year.

“He didn’t miss many dances, for sure, but he was a horse who came to our farm and is still in that transition period,” Courtney said. “He’s the type of horse who you can tell has just received a lot of love and good care throughout his career. He’s a total gentlemen and it’s been a pleasure getting to work with him.”

A bowed tendon ended Uno Mas Modelo’s racing days, but competition can still potentially be part of his future. As he heals, Racing For Home will try to transition him to a possible jumper once he’s ready to be ridden and start that path.

“It might take a little bit of time to get there (being a jumper). He didn’t join us until this year,” Courtney said. “He had some foot issues and even walking was difficult for a while, but he’s moving in the right direction. He’s not able to be ridden just yet, but he has that attitude; the willingness to please, and he has such a good, calm mentality. When he is physically ready, the mental jump to a new career should be no problem at all. He just rolls with anything and is really agreeable.”

Uno Mas Modelo wasn’t the first horse formerly trained by Quartarolo to end up with Racing For Home. The conditioner said the first thoroughbred he got for his daughter, named First Love, didn’t end up doing much on the racetrack and was handed over to an acquaintance in New Jersey. Years later, Quartarolo said they found out that First Love was in Racing For Home’s care. When it was time to find Uno Mas Modelo a new home, the choice was obvious.

“He was a roan and he’s all gray now,” Quartarolo said with a laugh. “We didn’t even know she had him. So, after that, when we were looking at things for Uno, my daughter said, ‘let me call Acacia because her family does a great job.’ It’s a great home for him, and they love him. He’s a sweetheart.”

Courtney said that love and support from Quartarolo’s barn was evident immediately after taking him in.

“His connections trained and treated him so well,” Courtney said.

“Unfortunately, some horses that have raced a lot of times can be very sour. Some of ours, it took them awhile to transition away from the racetrack. The mental side of things is the most important, so Uno is the great example of a horse who can re-train easily. But like people, horses have their own personalities and quirks and some transition more easily than others. You just have to follow their cues.”

Acacia Courtney said earning TAA accreditation was a proud moment as her non-profit is nearing its second decade of existence. NYRA and its horsemen are also committed supporters of the TAA, which accredits, inspects, and awards grants to approved aftercare organizations to retrain, retire, and rehome thoroughbreds using industry-wide funding.

“For me, given that I work in the industry, aftercare is a huge part of my life and my family’s life, so to know our organization meets those high standards, it’s a source of pride for me and my mother,” she said. “When you have horses end up in great spots off the racetrack, it’s a great feeling. It’s not always a success story like Uno Mas Modelo.”

Courtney, who began riding at the age of 8 with training in the hunter-jumper and dressage disciplines, inherited a lot of her skills as horsewoman from her mother, bolstered by their time together when the organization was founded.

While Acacia now travels extensively for her television work, she remains as involved as possible with her schedule.

“She travels so much now and it’s a fabulous career for her,” Sherrie Courtney said. “When she’s in Florida, she obviously doesn’t get to ride as much as she likes to, but early on when we first started, it was day-in and day-out and we did it together all the time. You need to be a soft, kind rider and that’s what Acacia is. I think that’s what I miss most about not having her with me is that she’s not being able to ride as much. But I have myself and a wonderful trainer we work with, because no matter how experienced you are, eyes on the ground are so important.”

“I’ve never had a horse quite like him where he’s just settled in so immediately,” she said. “He’s so kind. All the people who took care of him before did a wonderful job, because he’s mannerly and kind and sweet.”

A frequent winner on the track, it appears that Uno Mas Modelo is well on his way to a successful second career as he bonds with his new caretakers.

“He likes human contact and loves when you are in his stall,” said Sherrie. “Right away, I blanketed him in his stall, and I don’t usually do that because I don’t really know the horse, but I just felt like he was so appreciative.”

And the Courtneys are appreciative for the support of the industry as they work to rehome retired equine athletes like Uno Mas Modelo.

“We care and we give the absolute best care for the horses. It’s the point of giving them fabulous homes and giving them sanctuary,” said Sherrie. “That’s what it is all about; making sure every horse is in a great situation and we’re doing the best for them.”