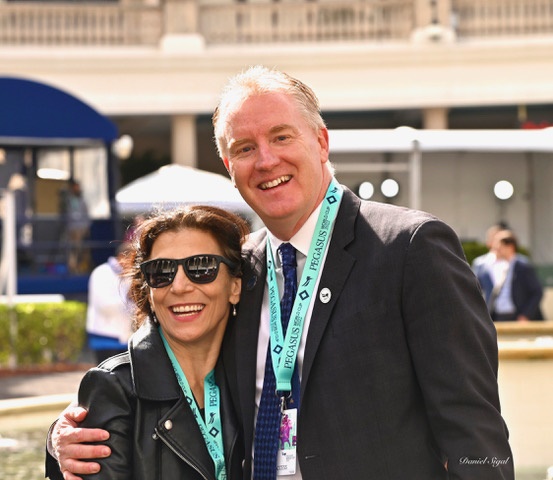 The need to ensure responsible ownership at all stages of a racehorse’s life was a recurring theme at this week’s Thoroughbred Owner Conference, which was held July 25-26 in the 1863 Club at Saratoga Race Course. The event, which attracted more than 100 attendees, was presented by the New York Racing Association (NYRA) and hosted by The Jockey Club and Thoroughbred Owners and Breeders Association.

The keynote address of the conference was delivered by Stacie Clark-Rogers, operations consultant for the Thoroughbred Aftercare Alliance (TAA). Clark-Rogers summarized the evolution of aftercare over the last 50 years and its increased prioritization among those involved in the Thoroughbred industry. She touched on the various organizations and initiatives formed by the industry to support aftercare, including the Thoroughbred Retirement Foundation, Thoroughbred Charities of America, Retired Racehorse Project, Thoroughbred Incentive Program, and TAA. She talked about the importance of the TAA and its role as racing’s accrediting and funding body for aftercare.

Among the organizations accredited by the TAA are groups that offer equine-assisted therapy (EAT) by utilizing off-the-track Thoroughbreds, and Clark-Rogers advocated for EAT as an option for these horses.

“These programs in my opinion are greatly undervalued, and we could be doing so much more to connect people with retired Thoroughbreds, and in return, promote the horse, the industry, and the sport of horse racing,” she said.

“If we have learned anything over the last 20 years of aftercare initiatives, we all need to work together in all aspects of this industry, not just so the aftercare groups can succeed, but so the industry can be more accountable and thus succeed as a responsible, ethical sport.”

Other topics of focus at the conference included buying at the sales, selecting a trainer, equine safety, partnerships, and international racing. The second day of the event featured a panel composed of a family of jockeys: Dylan Davis was joined by his sister Katie and her husband, Trevor McCarthy, with an appearance by Dylan and Katie’s father, former jockey Robbie Davis. The discussion was moderated by Eclipse Award-winning jockey Richard Migliore, who currently works as a racing analyst for NYRA.

Tony Allevato, chief revenue officer for NYRA and president of NYRA Bets, opened the conference by describing efforts NYRA has made to improve the racing and ownership experience. For example, during NYRA’s racing coverage on Fox Sports, the production team makes it a priority to interview owners before and after each race.

“It’s important for us as an operator to make the experience as good as possible,” he said. “If an owner thinks that there’s a chance that they can get on national TV, we think that adds to the experience.”

The conference began with a reception at the National Museum of Racing and Hall of Fame, and attendees enjoyed the races at Saratoga on Wednesday.

“After being postponed for two years due to COVID-19, we were delighted to finally bring the Thoroughbred Owner Conference to Saratoga for the first time,” said Gary Falter, project manager for OwnerView. “Competing at Saratoga is a dream for any Thoroughbred owner and a fitting location for this conference, where we provide existing, new, and prospective owners the opportunity to learn about all aspects of owning racehorses while facilitating networking with the industry’s most prominent names.”

OwnerView is a joint effort spearheaded by The Jockey Club and the Thoroughbred Owners and Breeders Association to encourage ownership of Thoroughbreds and provide accurate information on aspects of ownership such as trainers, public racing syndicates, the process of purchasing and owning a Thoroughbred, racehorse retirement, and owner licensing.

The need for a central resource to encourage Thoroughbred ownership was identified in the comprehensive economic study of the sport that was commissioned by The Jockey Club and conducted by McKinsey & Company in 2011. The OwnerView site was launched in May 2012.

Additional information about OwnerView is available at ownerview.com or by contacting Gary Falter at gfalter@jockeyclub.com or 859-224-2803.