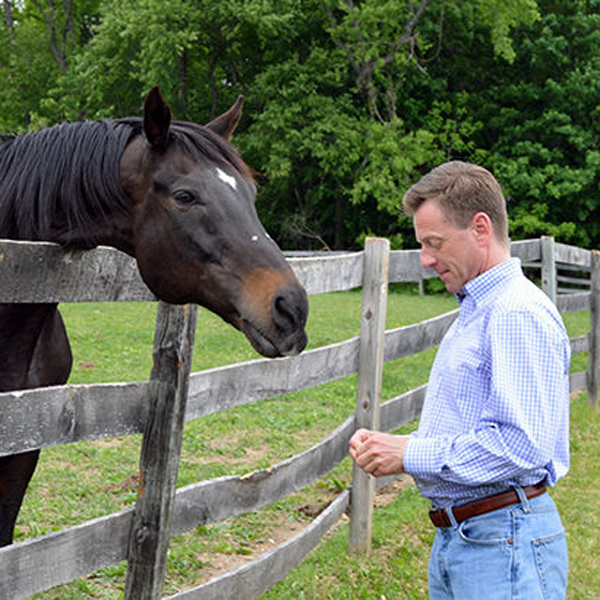 Bubba Sparks had a nose for the wire on the racetrack, and at the age of 19 the New York-bred racehorse is still finding new ways to win at the TAA-accredited Thoroughbred Retirement Foundation’s (TRF) Second Chances Program at Wallkill Correctional Facility in upstate New York.

“He was a horse that always fought for it and really wanted to win,” said retired Eclipse Award-winning jockey Richard Migliore, who piloted Bubba Sparks to back-to-back wins at Belmont Park in the fall of 2004 for trainer Bruce Levine. “He was the type of horse you didn’t mind getting in a street fight with because he wanted to be a winner. He wasn’t going to shy away.”

Bubba Sparks won five races in a 20-race career, mainly on the New York Racing Association, Inc. (NYRA) circuit, with three coming at Belmont Park, including a gate-to-wire effort in a state-bred allowance race on Sept. 10, 2004. He followed up on Oct. 15, 2004 with a pace-pressing neck score in an open $70,000 claiming race, which garnered Bubba Sparks a career-best 89 Beyer Speed Figure.

“That October win… I was under the weather and felt so bad. We got in a stretch duel and I was exhausted, but he got us home,” recalled Migliore. “He just kept putting his head out and wasn’t going to let anyone pass him.”

Campaigned throughout his career by Thomas Gallo’s Parting Glass Racing, Bubba Sparks went out a winner with a hard-fought neck score at Finger Lakes in September 2005.

He joined the TRF herd at Wallkill that October and has been a mainstay at the TAA-accredited program ever since. The NYRA and its horsemen are committed supporters of the TAA, which accredits, inspects, and awards grants to approved aftercare organizations to retrain, retire, and rehome Thoroughbreds using industry-wide funding.

To retire a horse to the TRF, horse owners are asked to visit the TRF website (www.trfinc.org) and review the retirement process and apply online. Each application is reviewed by the TRF’s national herd manager, in consultation with the Herd Committee of the TRF Board of Directors, who then review each application and approve, place or waitlist each horse that meets retirement criteria.

That criteria includes, Jockey Club registration, having run in at least one race, and thanks to the diversity of TAA-accredited organizations that focus on retraining and re-homing, the TRF primarily takes those horses, like Bubba Sparks, who are unable to pursue a second athletic career or who have aged out of the post-racing career. Once accepted into the TRF herd they are offered a promise of lifetime sanctuary.

“We celebrate all of the racing partnerships and thoroughbred owners who thoughtfully place their horses with safe, secure homes when their racing careers are over,” said Kim Weir, TRF’s Director of Major Gifts and Planned Giving. “Once accepted, the TRF requires a one-time donation and lifelong commitment of support for each horse placed in our herd.”

The TRF herd lives at 18 facilities across the country of which seven are Second Chances Program farms located at state correctional facilities where inmates participate in a vocational training program in equine care and stable management.

Bubba Sparks is part of a group of nearly 50 off-track thoroughbreds at Wallkill working with incarcerated men tackling issues ranging from substance abuse to anger management – the types of issues that ultimately landed them in prison.

Kelsey Kober, the Farm Manager and Vocational Instructor for the Department of Corrections, runs the unique program that employs anywhere from four to 10 inmates helping to manage the 80-acre property.

“The men groom him and feed the horses and they are really good about changing water frequently. Fresh water is important,” said Kober. “They groom the horses a lot more at this time of year with all the mud. And as soon as you do, they’ll go right back out to rolling in the field. They’re in retirement mode.”

The TRF at Wallkill program is intended and structured to deliver practical vocational training – to make the men more employable when they leave, whether that be in the horse industry or any other job.

However, Kober said the program also serves indirectly as a therapeutic service for both horse and inmate.

“I see it as therapeutic; not only for the horses, but for the men,” said Kober. “It takes time for the men to get to know the horses and a 1,200-pound horse is not something they see every day. They need to trust the horse and themselves to have the courage to go in a stall and work with them.”

Bubba Sparks is also benefiting from his ‘second chance’ while living out his retirement years at Wallkill.

“He’s very spunky. I can’t imagine what he was like as a baby because he still runs through the fields like he was two,” said Kober. “He lives with five other horses. He’s a big, tough guy and he loves to run the field. There are younger horses that live with him and they keep him active. I’ll see them come running up over the hill, racing and bucking and squealing.

Migliore, who rode 4,450 winners in his career and earned the Eclipse Award as the nation’s top apprentice rider in 1981, now appears as an analyst on America’s Day at the Races, the acclaimed national telecast produced by NYRA in partnership with FOX Sports and broadcast live on FS1 / FS2.

The veteran rider first visited the Wallkill facility to reconnect with Creme de La Fete, one of the first horses to grace the program which celebrated its 35th year last summer.

“I won 13 races on Creme de La Fete from when I was an apprentice into my journeyman years,” recalled Migliore. “In recent years, I’ve had the chance to go meet with the prisoners there and tour the grounds and visit Creme de La Fete’s grave.

“I’d bring win pictures of the retired horses up there to show to the guys,” added Migliore. “They know these horses now at 20-years-old with a bit of gray on their muzzle and a swayback, but they got a kick out of seeing their horses at 3-years-old winning at Belmont and Saratoga. It gave them a reference point of what their horse used to do.”

Migliore, as a longtime horseman, said he can understand why the program works for many of the inmates.

“Former racehorses will teach you how to respect them. Unfortunately, people who end up in prison are probably used to bullying and manipulating their way through life and you can’t get away with that with a racehorse,” said Migliore. “A racehorse will teach you to work with them and get along, as opposed to you just imposing your will on them. That’s probably pretty humbling for a big, strong guy that’s used to getting what they want.

“When you learn you can’t force your way through something, you learn to get along with the animal and work together,” continued Migliore. “I think it’s a good thing for both horses and people. You have to gain their respect and trust, and when you earn their trust they give it back to you in kind.”

Kober said she will often see a significant change in the men who come to work at the Wallkill farm.

“I see a change—if they’re willing to allow a change—in about three weeks. It mellows them out and they enjoy the peacefulness and the calmness of the farm,” said Kober. “And it’s not just with ‘Bubba’, but with all 48 horses on the farm. They learn to want to care for the horses, and also the property itself, like it’s their own.”

Kober said an inability to effectively communicate and underlying anger issues are a common thread among the many incarcerated men who have worked in the Wallkill program. For many of those men, working with horses allowed them to turn a corner.

“Taking responsibility for this property and the horses is big for people who maybe didn’t have a healthy purpose in life before this,” said Kober. “Being incarcerated is not something they want, but having a healthy environment to go to is important for their rehabilitation.

“The men who have come through the program and learned to connect with the horses are often able to turn that skill into being able to communicate with us,” added Kober. “The program does work if the inmate is willing to let it work and they allow the horses to be their therapy.”

Kober said the senior inmates within the program take on added responsibilities and will help to train the new inmates on the basics of horsemanship.

“It’s a magical aspect of the program,” said Kober. “I have a gentleman that was incarcerated here and worked with us at the farm for 18 months. He’s now hoping to get a job at Saratoga. He learned the top to bottom of a horse and was very proud of what he was doing.”

And Bubba Sparks has plenty to be proud of, too. He made just shy of $150,000 on the racetrack, but the value of the lessons he helps to provide at Wallkill is immeasurable.