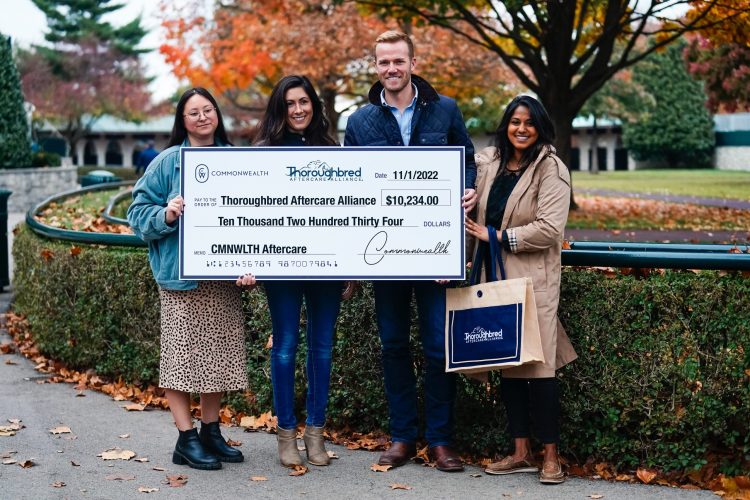 The Thoroughbred Aftercare Alliance (TAA) accepted a $10,234 check from Commonwealth today, November 1 at Keeneland. With every share sold, the up-and-coming syndicate allocates funds for Thoroughbred aftercare.

Despite Commonwealth’s Dubai World Cup (G1) winner Country Grammer foregoing the Breeders’ Cup World Championships, the organization felt it was important to acknowledge the Thoroughbred Aftercare Alliance as the Official Aftercare Partner of the Breeders’ Cup with a check presentation at Breeders’ Cup 2022 host racetrack– Keeneland.

“It’s an honor and a privilege to present this check to the TAA on behalf of Commonwealth shareholders,” said Commonwealth Head of Racing, Chase Chamberlin. “We’re nothing without the horse and it is our responsibility, as an industry, to make sure that our horses are cared for at every stage of their career. This check is just the beginning of Commonwealth’s ongoing commitment to supporting aftercare for racehorses.”

Founded in 2019 by Brian Doxtator and Chase Chamberlin, Commonwealth offers micro shares in world-class racehorses with the goal of making racehorse ownership accessible and interactive, even for those on a limited budget. Since the beginning, it was of the utmost importance to Commonwealth that aftercare be a central component of its funding model. For every $50 share sold on the platform, Commonwealth and its members donate 2% to aftercare.

“We wanted the company and our members to be invested in aftercare from the start,” said Chamberlin. “Ninety percent of our members are new to racing and we wanted their experience to begin in the right way. Together, we can do so much.”

Just last year Commonwealth sat down with the TAA to learn more about Thoroughbred aftercare and what their shareholders can do to support not only the horses under their ownership, but the aftercare movement as a whole.

“We are honored that Commonwealth chose the Thoroughbred Aftercare Alliance as their aftercare beneficiary and look forward to partnering with them in the future,” said TAA Funding and Events Manager, Emily (Dresen) Scandore. “Although Commonwealth may be new on the syndicate scene, their initiative for supporting retired racehorses by donating to Thoroughbred aftercare will take them far.”