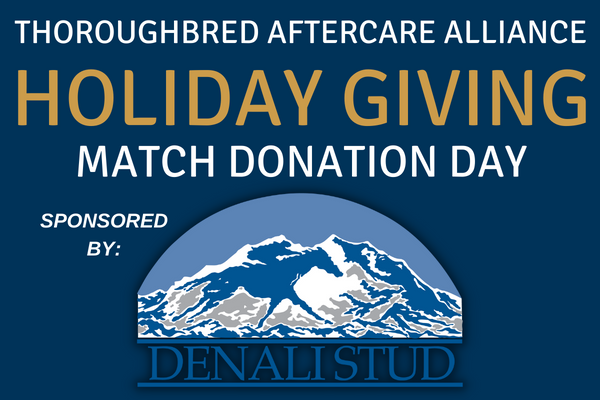 As part of the Thoroughbred Aftercare Alliance (TAA)’s month-long Holiday Giving Campaign, Denali Stud has pledged to match all donations up to $5,000 made to the TAA on Dec. 1, 2022. Denali Stud has contributed funds to the TAA since 2013 and continues to be an aftercare ambassador, representing responsible breeding and ownership within the racing industry.

“Denali Stud has been a part of the TAA’s journey for nearly a decade, and we are honored to partner with them on our first Holiday Giving match donation day,” said TAA Operations Consultant, Stacie Clark Rogers. “With the promise of a $5,000 match donation from Denali, the TAA has the opportunity to raise $10,000 in a single day, but we need your help.”

TAA’s Holiday Giving Campaign commenced November 29th and is scheduled to conclude New Year’s Eve. Those wishing to support the TAA, its 81 accredited organizations, and thousands of retired Thoroughbreds, can donate through the TAA’s website or text DONATE to 56651. During the Holiday Giving Campaign, TAA is also offering donors the benefit of sending digital holiday cards to colleagues, friends, and loved ones.

Throughout the end of the year, the Thoroughbred Aftercare Alliance will continue to host special one-day only donation matches with some of horse racing’s biggest names. For more chances to double your donation, watch the TAA’s social media, website, and industry advertisements for the next Holiday Giving match day announcement.

To learn more and donate to the TAA’s Holiday Giving campaign, CLICK HERE.