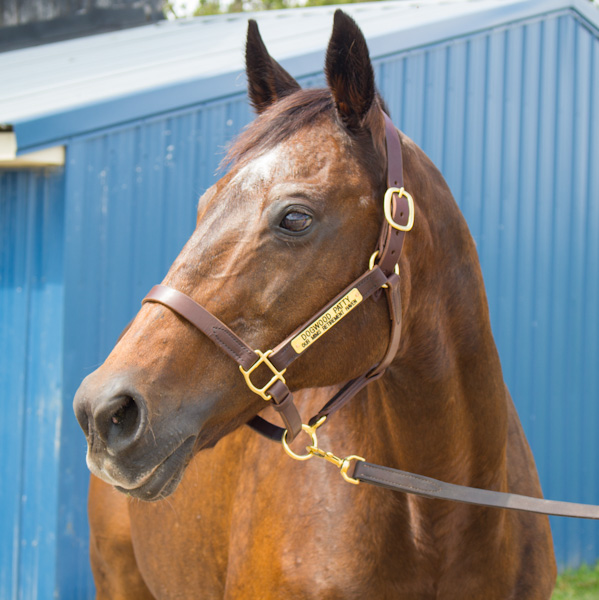 Dogwood Patty made all 52 of her starts in Canada, mostly in the claiming ranks at Fort Erie and Woodbine. The daughter of Sauce Boat earned a total of $58,825, with eight wins, eight seconds, and four thirds.

Out of her four foals to race, Dogwood Patty’s highest earner was Yes It’s Patty, a daughter of Yes It’s True, who earned $87,000.

Dogwood Patty then found her way to TAA-accredited Our Mims Retirement Haven. According to Our Mims founder and president Jeanne Mirabito, the mare was loved by her former racing connections.

“Patty is extremely smart, even to the point of waving her hoof at me if she has picked up a stone,” Mirabito said. “I am pretty sure Patty has inserted herself as second in command since Missy’s (Missy White Oak) passing.”

After an irreparable leg injury, Dogwood Patty was euthanized at the haven Jan. 1, 2020.

Patty’s former connections, Rob and Cathy Dickenson, provided for Patty during her residence at Our Mims.

Jeanne Mirabito, founder and President remains grateful to the Dickensons. “First, for making sure their horse was safe and secure. And then for allowing us the honor of having Patty here. Patty was one of those horses who touched our hearts so deeply.”

Director of Barn Management, Ann Cheek Said, “I will sure miss Patty. She was sure to let me know just how she thought about things I did to her. And she always showed me how grateful she was after I gave her that first shave in the summer.”

Some horses go out of their way to bond with humans. Patty was one of those.

“Dogwood Patty was always very kind and gentle with me,” commented Laura Fallis, Vice President of OMRH. “As if she knew how much help I needed help in doing things right for her. I will miss her terribly.”

Dogwood Patty’s cremains will be buried in Invincible Spirit Cemetery.