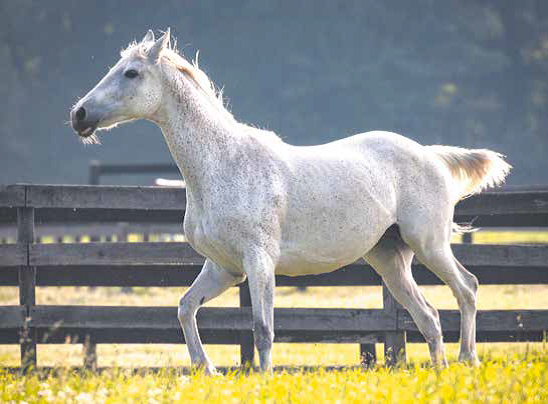 Ceci Divine, who was a winner on the racetrack under the name Royal Citadel, arrived at her forever home at Equine Advocates Rescue & Sanctuary in New York in May 2018.

Equine Advocates is a national, nonprofit rescue, educational, and advocacy organization founded in 1996 in response to the issue of horse slaughter. Structured initially as a rescue operation, the organization expanded in 2004 to include a 140-acre sanctuary in upstate New York, where some 80 horses of all breeds and backgrounds—including off-the-track Thoroughbreds—currently reside. Founder and president Susan Wagner estimates that thousands of equines have been transitioned into better situations through the efforts of those involved with Equine Advocates.

Currently, some 80 horses, donkeys, ponies, and mules reside at the sanctuary near Chatham, which Wagner describes as “an equine village where they live out their lives in a natural environment, allowing them to socialize with one other.” Many residents have old injuries and special needs.

In 2006, Equine Advocates opened its Humane Education Center, where classes and seminars are conducted and where visitors can learn about equine issues and responsible horse guardianship. The group has participated in cruelty investigations and held symposiums for law enforcement in dealing with such cases. Equine Advocates has been recognized by Thoroughbred Charities of America and the New York State Humane Association for its work, in addition to being accredited by both the TAA and the Global Federation of Animal Sanctuaries.

“We combine our rescue efforts with advocacy in order to effect change, educate people, and promote humane treatment of horses,” Wagner said. “In addition to providing sanctuary and a loving home for our rescued horses, we focus on teaching people how to become better, more responsible horse guardians.”