Final Furlong, founded in 2009 by Stephanie Brennan, has placed dozens of ex-racehorses into new homes or safe and secure retirement while establishing itself as a leader in Thoroughbred aftercare.

The Final Furlong team, comprised of Brennan and volunteers, scans entries for at-risk runners that are heading down in class. Using funds garnered through donations and grants, the organization acquires targeted racehorses and brings them to its Ocala, Fla., base, where they remain for rehab and evaluation until deemed ready to move forward.

There are no adoption fees, though prospective new owners are thoroughly screened. A contract must be completed, accompanied by a letter from an industry professional indicating their ability to care for an off-the-track Thoroughbred. An additional letter from the veterinarian who will care for the horse also is required, along with photos of the new home.

Brennan has worked alongside her husband, trainer Niall Brennan, developing some of America’s top racehorses, including 2013 Kentucky Derby winner Orb, 2013 Belmont winner Palace Malice, and champion Dayatthespa. Many of Final Furlong’s graduates came through that program, including Gunpowder Creek and Canaan Land, retrained as a dressage competitor and pony horse, respectively. Others have gone on to careers as eventers, hunter/jumpers, trail horses, and companion animals. Horses such as stakes-placed Hammock and royally bred Indian Key successfully transitioned from the racetrack to the show ring. Several remain permanent retirees at Final Furlong.

According to Stephanie Brennan, “Final Furlong simply wants to give the horses who have given so much to us an opportunity to excel at another career.” 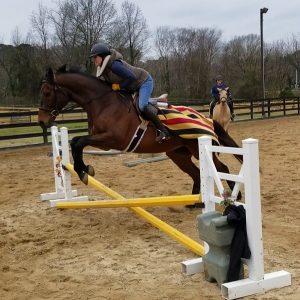 Arch Daddy – Arch Daddy made eight starts before retiring with a record of 2-0-0 and earnings just under $64,000. The half brother to multiple grade 1 winner Lord Nelson retired to TAA-accredited Final Furlong. Read more >>