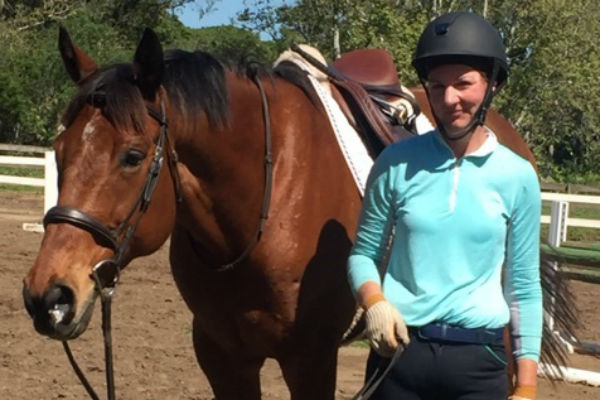 Mountain Yodler raced 23 times in the claiming ranks in California, only reaching the winner’s circle once and earning three other placings.

The California-bred son of Swiss Yodeler finished his on-track career in 2014. From there, he made his way to TAA-accredited Redwings Horse Sanctuary while recovering from a bowed tendon.

April Stokes came across a photo of Mountain Yodler and was struck by his kind eye. As she was also recovering (a broken spine left her out of the saddle for a year), she felt a connection with the gelding. The two hit it off and soon he was on his way home with her.

“I looked at his eye and knew he was my horse,” she said.

“When I brought him home, he went straight to a trainer for 60 days while I had surgery. When I started riding again, we just clicked.”

Having not jumped anything higher than a cross rail in years, April and “Hank” (as Mountain Yodler is now called) have worked their way up from ground rails to 2’9″ courses. She looks forward to a fun future with the now 10-year-old off-track Thoroughbred.

“My goals for Hank and I are to just have fun, be safe, and continue.”