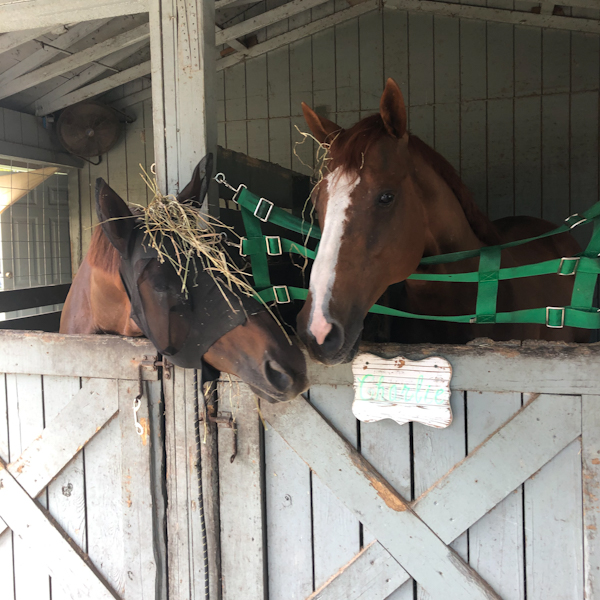 Red Button and Bringcheckcharlie had little in common until they reached TAA-accredited South Florida SPCA. Now, they’re both under the care of adopter Robin Johnson in Florida as they’re retraining for new careers.

Red Button, a 2012 Kentucky-bred son of Distorted Humor, retired with a record of 2-2-2 from 23 starts, with earnings of $116,835. At 2 he broke his maiden at Del Mar, defeating eventual Breeders’ Cup Juvenile (G1) winner Texas Red. Later that season, he ran second in the Zuma Beach Stakes after finishing off the board in the Del Mar Futurity (G1) behind eventual Triple Crown winner American Pharoah. He never made another start in a stakes race after his first season on the track and retired at age 5.

He is out of graded stakes winner Skipping Around (Skip Trial) and hails from the female family of 2015 Longines Kentucky Oaks (G1) runner up Shook Up.

Enter Bringcheckcharlie, a 2009 Florida-bred son of Bwana Charlie and out of stakes winner Conectis (IRE). He made six starts on the track and retired with a 1-1-0 record and earnings of $13,451.

While Red Button and Bringcheckcharlie weren’t residents of South Florida SPCA at the same time, they both caught the eye of Johnson.

“I started looking for a new addition in April of 2018. I happened to come across South Florida SPCA’s website and saw this cute little chestnut gelding,” Johnson said. “When they brought Red Button out to lunge him, I told my mom right there that he was the one. I could see lots of potential for him and a very bright future as a hunter.”

Earlier this year, Johnson contacted South Florida SPCA again. This time she was seeking a trail mount for her mother. But things didn’t go as planned.

“I went over to see (Bringcheckcharlie), rode him and fell in love,” she said. “While he is not a trail horse for my mother, he has become my prospective dressage mount for this upcoming show season.”

When asked what made her two adoptees stand out above the rest, Johnson had no shortage of praise.

“When I met Red Button, I was looking for a hunter to start and get back in the show ring with,” she said. “He was built perfectly, carried himself naturally, and was gorgeous to the eye. He fit exactly what I was looking for.” 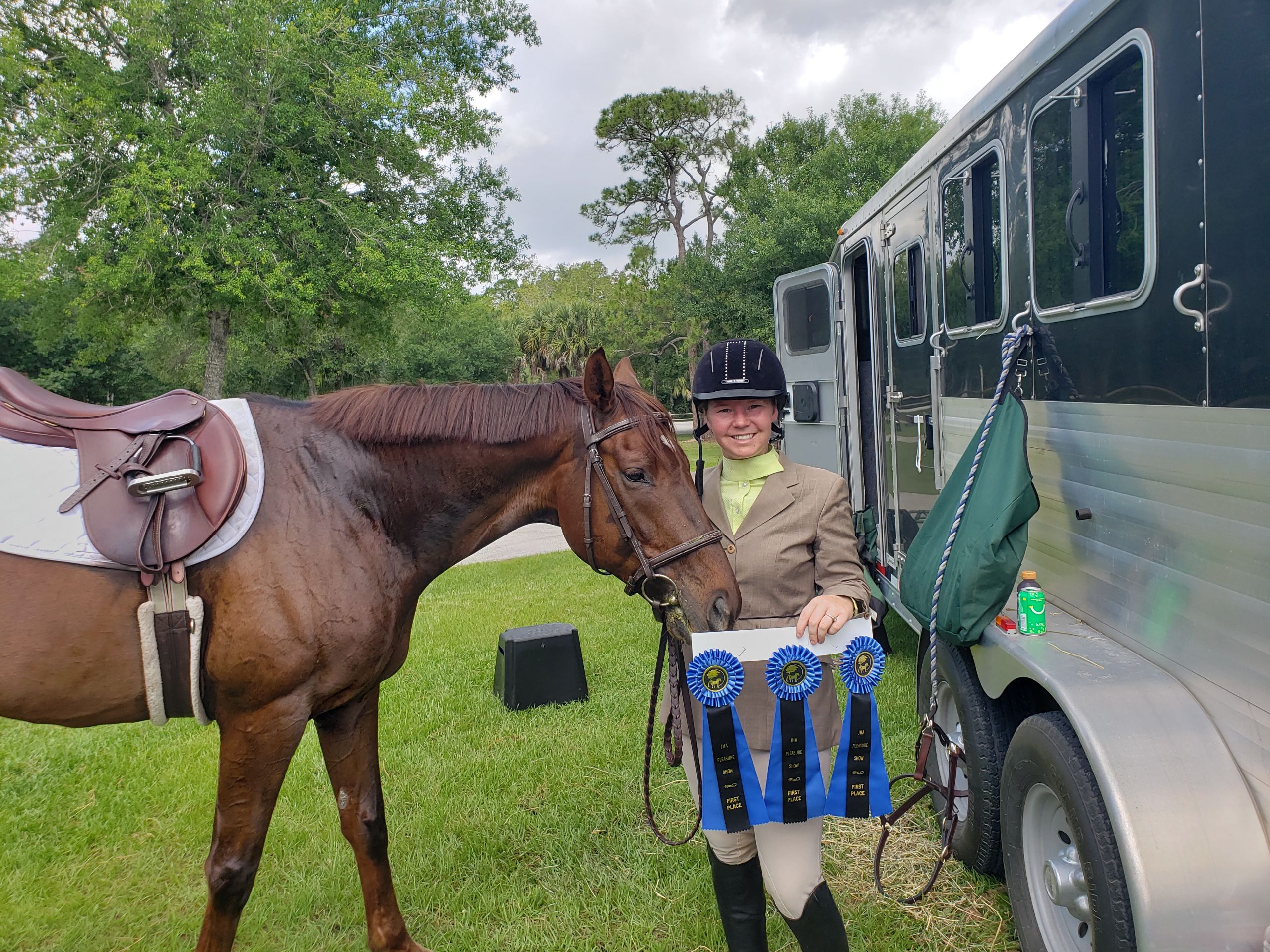 While Red Button is headed for the hunter ring, Bringcheckcharlie is following a different path.

“After a few rides at home on ‘Charlie,’ it was apparent that his big fluid gaits were exactly what would get us noticed in the dressage ring,” Johnson said.

And that they did. In their first show, they earned a few ribbons and scores between 66 and 68 percent.

Currently, Johnson’s focus for Red Button and ‘Charlie’ has been on natural horsemanship and ground work.

“We spend our nights progressing through obstacle courses and achieving individual goals for the two of them,” Johnson said.

While Red Button had some growing up to do, ‘Charlie’ recently returned to work after taking some time off due to an old bowed tendon. Unfazed, Johnson is willing to give him the time he needs with eyes on the fall show season.

“I am hoping they enjoy their new jobs and continue to make lots of progress as they show everyone that OTTBs can have great success in a new lifestyle after racing,” she said.

“We of course like to have fun more than anything, so we also plan lots of trail rides and fun trips locally and across the state to make sure they will always enjoy every minute of their lives with me.”