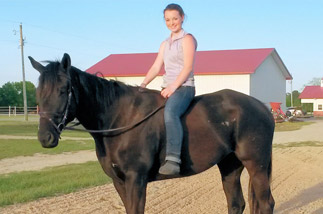 Stormin Hot is a 2009 Ontario-bred gelding who began his racing career in Canada and ended it in the U.S. He raced the majority of his races at Fort Erie Race Track with his maiden start coming at Woodbine and his last few taking him to Charles Town Races. After his last start, the dark bay gelding was donated to Thoroughbred Placement Resources. He had racked up record which included three wins from 17 starts.

“Bene” flourished in the TPR retraining program and even began competing in horse trials before being adopted by Erin F. “He is Erin’s first horse and a dream come true,” says Kimberly Clark, Executive Director of TPR. Erin’s father discovered TPR while on a business trip and followed up with a visit to one of their farms with his daughter. “It was love at first sight for Erin and Bene.” Erin had saved up her own money to pay for her new horse and changed his show name to “My Benediction.” The pair now enjoying both showing and just hanging out together, including spending quality time with Erin’s entire family. Erin states, “Having Bene has been a blessing, hence the name My Benediction. I’ve learned so many new things… He has made me a better rider, and I learn more about him every day, like the fact that he hates peanut butter sandwiches, and loves Pop-Tarts!”

Thoroughbred Placement Resources is based in Upper Marlboro, MD and was founded in 2007. TPR “exists to improve the lives of Thoroughbred racehorses” and does so through retraining and adopting out retired racers. The TAA accredited TPR in 2013. Learn more about their program at: http://www.goodhorse.org/.