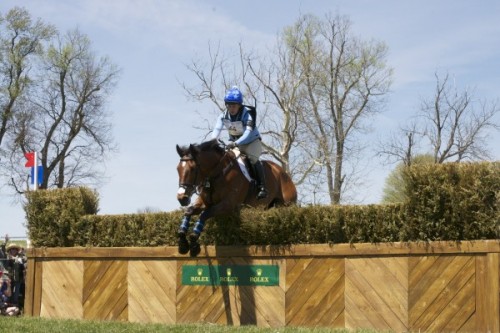 The Thoroughbred Aftercare Alliance (TAA) has partnered with Grand Slam Social to expand the TAA’s social media presence at this year’s Rolex Kentucky Three-Day Event (RK3DE). The TAA is the official charity of Rolex Kentucky, taking place on April 28 – May 1, 2016.

Grand Slam Social, a boutique social media company headed by Ashley Cline, Molly McGill, and Shona Rosenblum, will be managing the TAA’s coverage of the international equestrian event in order to expand the organization’s reach and following.

The TAA will be on-site for all four days of the RK3DE, as well as in attendance for the many other events surrounding the equestrian competition that will benefit the TAA, including a 5K run, Hunter Hayes concert, and Maker’s Mark charity bottle auction. The TAA will also be promoting the many off-track Thoroughbreds (OTTBs) competing at Rolex, including having meet-and-greets and autograph signings with top OTTB riders.

“We are thrilled to be working with the TAA at the Rolex, #RK3DE, event this year,” stated Shona Rosenblum, Grand Slam Social co-founder. “We are passionate about supporting Thoroughbred aftercare and increasing awareness about this talented breed among the entire equestrian industry. Grand Slam Social will be taking over TAA social media accounts, including Facebook, Twitter, Instagram, and Periscope, to generate buzz for the TAA at this prestigious international equestrian event, and we encourage everyone to join the conversation!”

“The Rolex Kentucky Three-Day Event is the opportune event to bring together fans of both racing and eventing as they watch retired racehorses excel in new upper level careers,” state Jimmy Bell, president of the TAA and Darley America. “We are excited to partner with Grand Slam Social to elevate our social media presence and ensure we reach the maximum number of new fans and supporters possible.”

Based in Lexington, Kentucky, the non-profit Thoroughbred Aftercare Alliance accredits, inspects and awards grants to approved aftercare organizations to retire, retrain and rehome Thoroughbreds using industry-wide funding. Funded initially by seed money from Breeders’ Cup Ltd., The Jockey Club, and Keeneland Association Inc., the TAA is supported by owners, trainers, breeders, racetracks, aftercare professionals and other industry groups. To date, 56 aftercare organizations supporting more than 180 facilities across the U.S. and Canada have been granted accreditation and received funding from the TAA. To learn more about the TAA, visit thoroughbredaftercare.org.

The Rolex Kentucky Three-Day Event is designated as a four-star eventing competition by the Fédération Equestre Internationale (International Equestrian Federation – FEI), a designation given only to the Olympic Games, World Championships, and six annual events around the world. Rolex Kentucky is the only four-star event in the Western Hemisphere. Each year, many of the world’s leading horses and riders compete at Rolex Kentucky for their share of $350,000 in prize money as well as a shot at the $350,000 Rolex Grand Slam of Eventing, which is awarded to the rider who wins the Rolex Kentucky, Mitsubishi Badminton, and Land Rover Burghley four-star events in succession. Learn more about the RK3DE at rk3de.org.