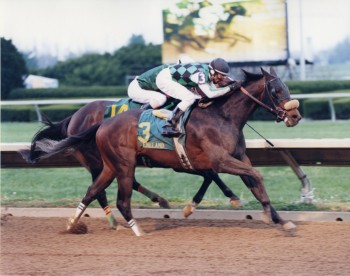 Victor Cooley may live a life of leisure in his semi-private paddock now, but he took the long, high road to end up at Old Friends Equine Retirement. The 1993 Ontario-bred gelding spent the first seven years of his life racking up accolades and becoming a champion racehorse. “Victor” raced under the silks of Windways Farm, acquiring 13 wins from 39 starts, including the Queen’s Plate at Woodbine, the Commonwealth Breeders’ Cup at Keeneland, and the Vosburgh at Belmont Park, among many other stakes wins and places. He also claimed the title of Champion Three Year Old Colt in Canada, kicking off a long, successful racing career.

The dark bay gelding capped off his career with one last win before being retired to his owner’s farm in Canada. Victor lived there until Windways Farm closed, after which he made the move south to the States to live at Old Friends. He will now spend the rest of his days surrounded by other champions and legends like himself.

Old Friends Equine Retirement was founded in 2003 with the mission of providing “dignified retirement to Thoroughbreds whose racing and breeding careers have come to an end.” Old Friends is located in Georgetown, KY and was accredited by the TAA in 2013. Read about all of their “Old Friends” at: http://www.oldfriends.org/.

The Thoroughbred Aftercare Alliance (TAA) is a 501(c)(3) non-profit organization who accredits and funds organizations that provide aftercare for Thoroughbreds. For more information on the TAA, visit: http://thoroughbredaftercare.org/.