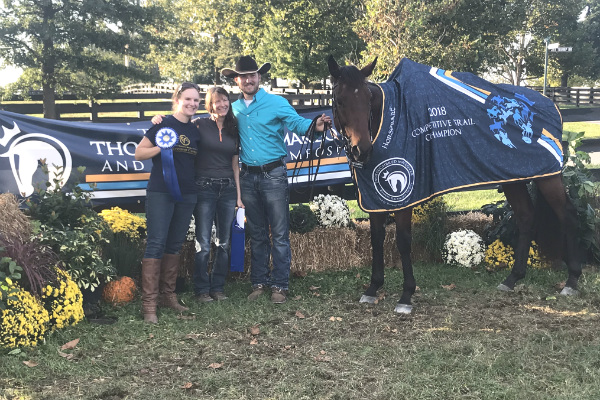 The Retired Racehorse Project’s Thoroughbred Makeover was a success and the TAA is proud to see so many accredited organizations well represented with competitors in nearly every discipline.

Congratulations to the TAA-accredited Maker’s Mark Secretariat Center grad Demarlboro and rider Houston Buflod on earning the title of Competitive Trail Champion. Demarlboro is a 2013 Kentucky-bred gelding with eight starts who was donated to the MMSC by breeder and owner Russell Fortune of Fortune Racing. After arriving at the MMSC, Demarlboro was adopted by Beth Berrettoni in September of 2017 and began his retraining with the help of Houston Buflod of Helge’s Horse Training.

[tweet https://twitter.com/TBaftercare/status/1048688331813527552]
TAA-accredited Second Stride grad Delightfully and rider Amy Lent competed in the freestyle championship after earning third place in the preliminary competition. For their routine, Lent and Delightfully performed an impressive driving pattern. This dynamic duo also competed in Competitive Trail and placed 11th. Delightfully is a 2014 Louisiana-bred filly who made just one start in December of 2017.

Some other TAA grad highlights from the event: