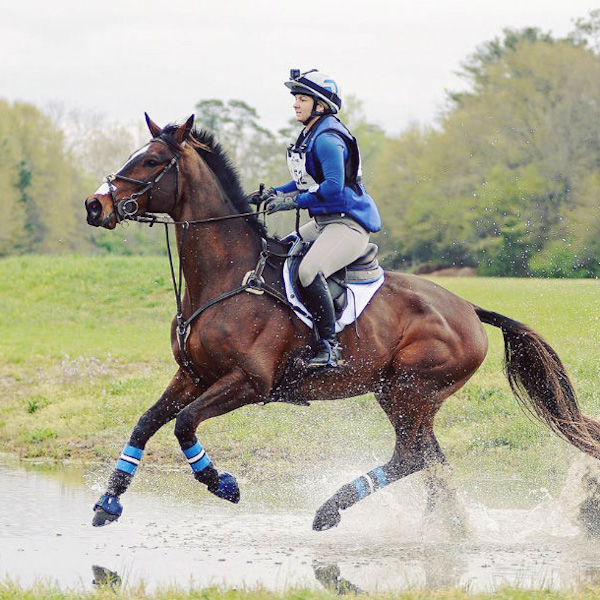 Selling her saddle the day before, Mallory Stiver found herself on the way to Oklahoma with her sister with some extra cash to spend.

After loading up her sister’s equine purchase at the farm where TAA-accredited Oklahoma Thoroughbred Retirement Program is located, Stiver was taken into a field by farm owner Nelda Kettles where some of the younger horses were kept. That’s where she spotted Andrus, an Oklahoma-bred son of Artax who posted one win in five career starts. He ran his last race at Will Rogers Downs in April of 2013, during his 3-year-old season, and retired with earnings of $5,219.

“There was a dark bay that I thought was super gorgeous but then (Andrus) walked right up to me while the rest of the babies were being rambunctious,” she said. “He was just so quiet for a 3-year-old, and quite honestly, had a very kind eye. I was also obsessed with his stripe on his face. Nelda told me she thought he would make a good event horse and that was all it took for me to say yes.

“He just looked like he had good strong feet, had a presence about him that stood out to me, and I thought conformationally he looked very correct and uphill. So Nelda let me fill out adoption papers, I handed over the $500 adoption fee, and I loaded him up on the trailer. When he hopped on with absolutely no hesitation, I knew I made a good decision.”

Bred by Candy Meadows, Andrus is out of the black-type winning Here We Come mare Goodie Good Girl. Never finding his calling on the racetrack, the now 8-year-old gelding is making a name for himself in the eventing world with Stiver.

“He’s helped me complete my first ever, and his first ever, training-level event, and we’ve gone on to complete two one-stars, both with clean cross country rounds,” she said of the gelding, now called “Huey” around the barn and “Hugo Boss” in the show ring.

The duo completed an intermediate-level event July 14-15 at the Kentucky Horse Park.

“He’s been my dream horse since bringing him home, and I am so glad that I listened to my gut the day I saw him,” she said.

In addition to being a solid partner for Stiver, the former runner also helped her stay with the sport and was a comfort in a time of need. Right after she adopted “Huey,” Stiver had her novice-level event horse diagnosed with degenerative bone disease and subsequently retired from jumping. Then the following year, her former jumper mount was euthanized after a long battle with cancer while her retired eventer had a paddock accident that forced him to be euthanized as well.

“I truly believe that fate put him in my life … I was incredibly devastated,” she said. “If I hadn’t had Huey to keep me going, I would’ve probably quit riding. Having this young baby that I got to introduce to the show world was very gratifying. He took to everything like a sponge to water. He had a laid back attitude with everything I introduced him to. We spent the first six months lunging and trail riding and he was just a complete joy. … It was a really rough time for me and having Huey made it a little bit better.”