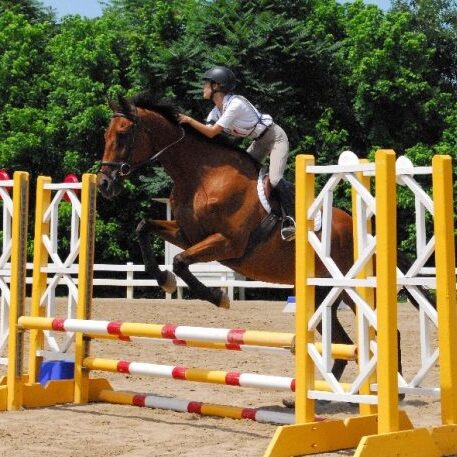 TAA-accredited Brook Hill Retirement Center for Horses specializes in working with older Thoroughbreds with lameness issues. Horses, like Big Deuce, get another chance of finding a new career and forever home in their later years.

Foaled in 1995, Big Deuce raced Hialeah Park, Tampa Bay, and Calder. After his racing career, he was bought as a show jumping prospect and had a successful career in the upper levels.

Fast forward to 2013, when a thin, lame horse now 18 years old, arrived at Brook Hill Farm. He had what resembles stringhalt, but upon further diagnosis from Virginia Tech, it was determined that he had an unusual muscle problem. After a year of a new diet rich in fat and a rehabilitation plan, he put on weight, was sound, and was ready to begin to work again.

Over time, and with patience and loving care, he started work over cross-rails and low jumps. He was adopted by a United States Pony Club teen who had dreams of jumping in the children/amateur division. She is patient, and Big Deuce is the schoolmaster, teaching her the skills she needs to be successful. At age 20, Big Deuce and his adopter successfully competed in the children/amateur divisions at recognized shows and won many ribbons.

Now, at age 23, Big Deuce is still jumping. His original Pony Club owner has passed him down to a younger Pony Clubber, at a lower level. These two just competed at the regional United States Pony Club Rally in the 2’6″ division.