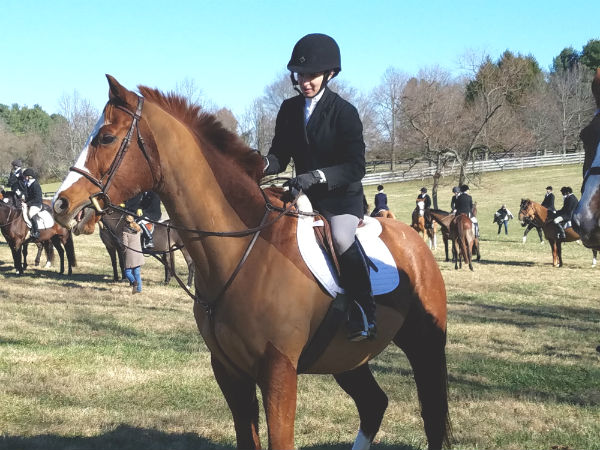 A $3,500 purchase as a yearling at the 2008 Fasig-Tipton Midlantic Fall yearling sale, Ponzi Scheme more than made up for his modest purchase price in his eight-season, 61-start career.

The multiple stakes winning son of Sunday Break (JPN) retired from racing with a record of 10-7-13 and earnings of $491,765. Out of the Regal Classic mare Queen Majesty, Ponzi Scheme’s notable scores came in the Stymie Stakes and Joseph French Memorial Stakes at Delaware Park, and the Decathlon Stakes at Monmouth Park. He placed twice in graded company—finishing third in both the Monmouth Cup Stakes (G2) and Philip H. Iselin Stakes (G3) at Monmouth.

But that’s not the end of his story. Ponzi Scheme was retired from racing at TAA-accredited MidAtlantic Horse Rescue, and that’s where he met Megan Klein.

Klein was still upset over the loss of her horse in the summer of 2017, but was open minded on finding a new mount. Introduced to MidAtlantic Horse Rescue through a friend, Klein talked to executive director Bev Strauss on the phone about an ideal horse, and Ponzi Scheme’s name came up.

Still hesitant on the decision to purchase another horse, Klein agreed to attend a clinic at MidAtlantic and check out a few of their options.

“I made the trip up to the [MAHR] for the clinic, and Bev was so welcoming and accommodating,” Klein said. “She introduced me to some of the horses and ‘the one’ [Ponzi Scheme] she discussed with me over the phone.

“I was immediately drawn to him and he came right up to me in the field. I’m also a sucker for chestnuts with chrome, which is exactly what he is.”

Even with a solid first ride, Klein wasn’t convinced that now was a good time for her to adopt. But she also couldn’t let the thought of him go. Weeks after the clinic, she kept checking his online listing, making sure that he was still available.

“There was just something about him that I could not shake from my brain but I was not ready to pull the trigger to adopt. That itch would not go away,” she said, adding that she gave him another trial ride a month later.

“I had looked at several horses online but kept coming back to Ponzi. It was more of an intuitive feeling that I had. This happened with my old horse, so I was familiar with the feeling. Such a strong sense of not wanting to lose something special.”

But then, the chance that she could possibly lose him forever made her jump into action.

“A week went by and Bev texted me saying someone was coming from North Carolina to look at him and was bringing her trailer,” Klein said. “I knew if I didn’t jump at the opportunity, I would lose him. It was like the universe was trying to tell me something. I finally pulled the trigger and decided to adopt him. Two weeks later he was dropped off at his new forever home.”

However, settling into his forever home and the retraining process didn’t start out smoothly. ‘Ponzi’ battled ulcers and Lyme disease right after Klein adopted him. After getting those issues sorted, the duo are happy and Klein hopes that the now 11-year-old can be a good all-around horse.

“As far as training, we have taken multiple dressage lessons and working on getting our flatwork down. He has really taken to the trails and loves to jump over small logs. We are just taking things slow and really trying to build his confidence. He is a fast learner and really loves the diversity in training,” she said, adding that she’s even taken him out with the foxhunting crowd.

“Ultimately, I want him to be an all-around horse,” she said. “Long-term, I am hoping we can try eventing and jumpers, since that is newer to me. I think he would really like the variety. Overall, just looking to have fun.”