Crank It Up Peggy 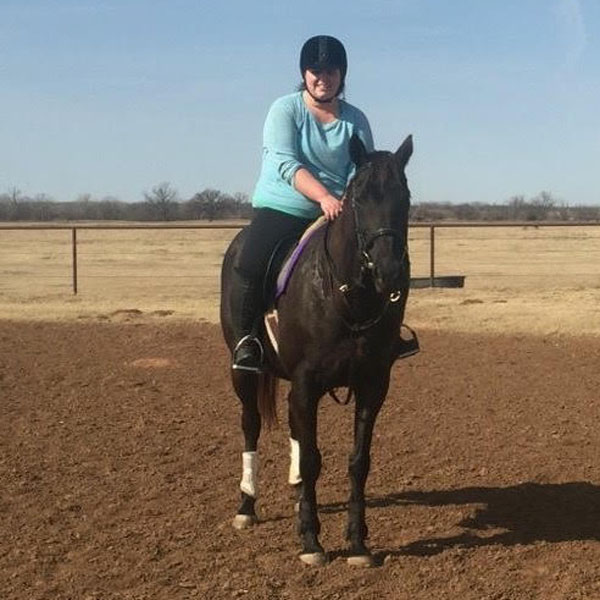 Crank It Up Peggy

She donated to the cause to help the mares, three of which were going to be helped by Thoroughbred Athletes, and decided to sleep on the decision to adopt one.

“I wouldn’t have time to meet any of the three until pickup, so I had to make a choice from the three photos I was given,” Shurrum said. “I had convinced myself to sleep on the decision. In fact, I had originally talked myself out of adopting one of them before going to bed, but that would change once I had spent the night dreaming of foals.”

No stranger to navigating the unknown waters of horse shopping, Shurrum knew better than to make a decision off of a single photograph. But she couldn’t shake the feeling that she got from one horse in particular.

“In all of my years my mom and I horse shopped across the state of California when I was a kid, we had come across a lot of charlatans,” she said. “However, all reason was brushed aside when I saw that black, thin, partially hairless, very pregnant mare. What horse crazy kid hasn’t read Black Beauty?

“I had no idea what her name was, if she was going to be sound, but I just seemed to know everything was going to be OK. I try not to take a lot of risks in my personal life, but before I even met her, I just had ‘the feeling.’ Turns out, she was the only sound one of the three mares.”

That dark bay mare was Crank It Up Peggy, a Texas-bred daughter of Danotable. She raced for two seasons, making 16 starts in Texas, Oklahoma, and Louisiana, and visiting the winner’s circle twice.

As the mare settled into her new home with Shurrum, she seemed grateful to receive care while Shurrum and her vet were left wondering how far along the she was.

“Being so thin, it is hard to know since pregnancy challenges normal proportions. I fed her absolutely anything she would eat for 60 days to catch her up. She was grateful, and I was impressed at her willingness to let me poke and prod her as we bonded, and the baby continued to grow,” she said.

Crank It Up Peggy began to feel so good that one day she escaped from her paddock and took a journey up the road but was safely caught and returned.

“One afternoon I received a call from the sheriff’s department that a black horse was located three miles up the road at an oil rig,” Shurrum recalled. “”Peggy” had decided to open her gate and go for a jaunt. I had just bought a new SUV and not only did I have to drive it on gravel, red dirt roads, but I had to escort this giant mare I really didn’t know back to the property I boarded on with said SUV.

“She politely jogged beside my SUV back to the farm. It was fairly warm, so I hosed her off, got her cooled off, and secured her back into her paddock. I left that night grateful I had found her and that she had come back without injury,” she said.

And the next day brought a welcome surprise.

“The next morning, with the sun rising, I pulled up to find a long-legged red filly. So windswept, so giant,” Shurrum recalled, adding that the filly was named Tiffany.

Crank It Up Peggy and her filly

Shurrum never swung a leg over “Peggy” until a few months after that, and she continued to build off the basics the mare already knew. Now, almost four years later, Shurrum says “Peggy” is much livelier and is learning to use her body more under saddle, while her daughter Tiffany will be started under saddle soon. Shurrum isn’t in a rush with either and is enjoying spending time with them—and her seven other horses. 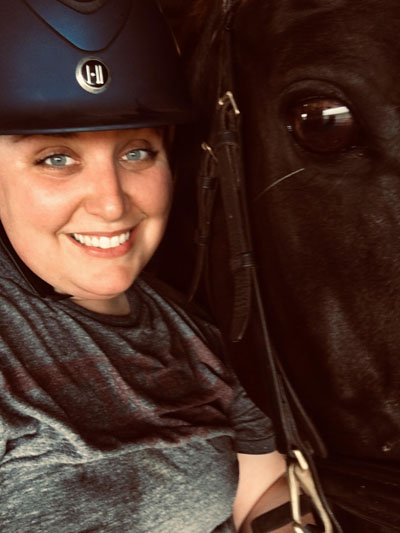 Crank It Up Peggy and Rebecca Shurrum

“Showing isn’t really in my future, but I do enjoy going to clinics and expanding my knowledge base,” she said. “I mainly ride dressage, but I would like to get jumping again, possibly event a little here and there and at schooling shows. With (‘Peggy’) being 18, I am careful with her, but she has never been lame in the four years I have owned her.