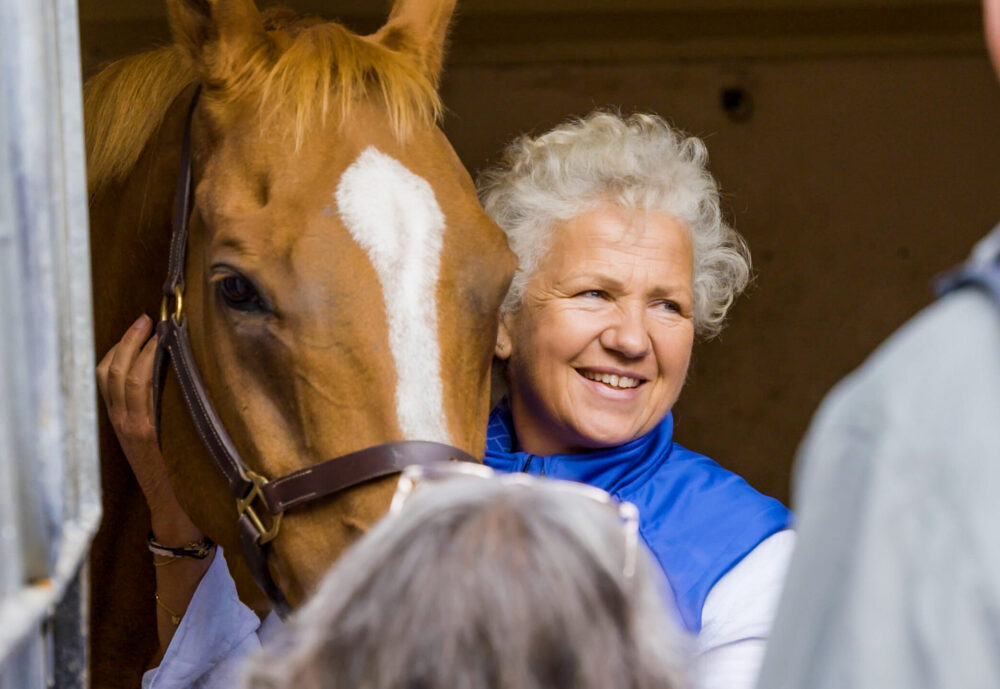 Godolphin has cemented its place among Thoroughbred racing’s most renowned owners and breeders worldwide, demonstrating the possibility to achieve success at the highest level of the sport spanning four continents.

The same world-class effort Sheikh Mohammed’s Godolphin has displayed in breeding and racing horses also applies to aftercare. The Thoroughbred Aftercare Alliance recently caught up with Godolphin’s strategic adviser for charities, Diana Cooper, to discuss the evolution of aftercare in the organization.

“Since the very beginning of Godolphin, we have had an aftercare program that has evolved over the years,” Cooper recalled. “About seven years ago we became more proactive about formalizing the programs we had in each country under the Godolphin banner, and so the Godolphin Lifetime Care brand name came to fruition. Our objective is to create a greater awareness, passion, and care for these Thoroughbreds throughout their lives, to provide and encourage the best possible lifelong care.”

Godolphin Lifetime Care representatives around the world were among those in attendance for these early meetings and annually hold court with aftercare and racing representatives. Every Thoroughbred who is a part of the flagship ownership entity has a safety net for the duration of its life, long after retiring from racing.

“In each country where Godolphin operates, we have a lifetime care program that reflects the culture and fits in with the infrastructure of the industry in that country,” Cooper explained. “We are very proud to be able to promote the secondary careers of these horses around the world.”

Because of differences in practices, policies, and demand for Thoroughbred aftercare among countries, GLC programs in Europe, Australia, United States, and Japan have individualized protocols. More than anything else, the depth of the GLC program depends on the level of preexisting aftercare infrastructure already in place in that racing jurisdiction.

In the U.S., Godolphin’s Lifetime Care program is overseen by Godolphin racing office and sales manager Emma Browne Lovatt, who has been under the Godolphin umbrella for 20 years. Although she wears many hats for the U.S. racing and breeding operation, Lovatt takes great pride in the success of the aftercare program.

“The Lifetime Care program is a very important aspect of the business model: It’s part of the way we do business, and it has to be included in what we do,” Lovatt said. “Their racing career is the smallest part of their life, and we’ve got to try to ensure that the rest of their lives, whether it be the next 15 to 20 years, is somewhere they will be well taken care of.” 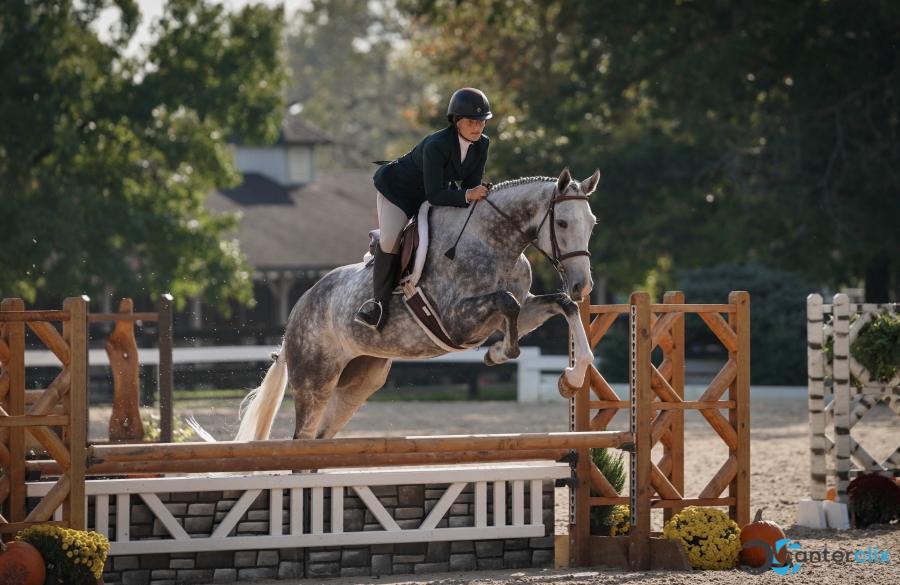 Since 2014, Lovatt estimates she has helped rehome nearly 184 Godolphin horses. Horses are either rehomed directly following their letdown period or are transferred to an aftercare organization that provides retraining and adoption resources.

“I have a wait-list of people interested in adopting Godolphin graduates—it’s ginormous,” Lovatt said. “I also use TAA-accredited New Vocations and the Secretariat Center.”

Horses that transition through TAA-accredited organizations are protected under the TAA’s Code of Standards. Thanks to the preexisting infrastructure the TAA and its 81 accredited organizations provide, Godolphin horses that otherwise would be rehomed with no retraining have the opportunity to discover what discipline they are best suited for in building a foundation toward a second career.

For example, Godolphin-trained gelding Regiment made two career starts and never broke his maiden. The decision was made to retire the son of Indian Charlie from racing, thus activating the next phase of his life—transitioning through the GLC program. Regiment spent six months in training at the Secretariat Center in Lexington, where it was quickly determined that, with the right adopter, “Reggie,” had the potential to be an upper-level eventer. Fast forward seven years to 2022, Regiment and adopter McKenzie Dey Cumbea have successfully completed numerous four-star events.

“In Europe our retraining program is based in the U.K.,” Cooper explained. “At our Newmarket retraining facility, we look after horses that have been particular friends to us. We retrain them, and they become our ambassadors.” 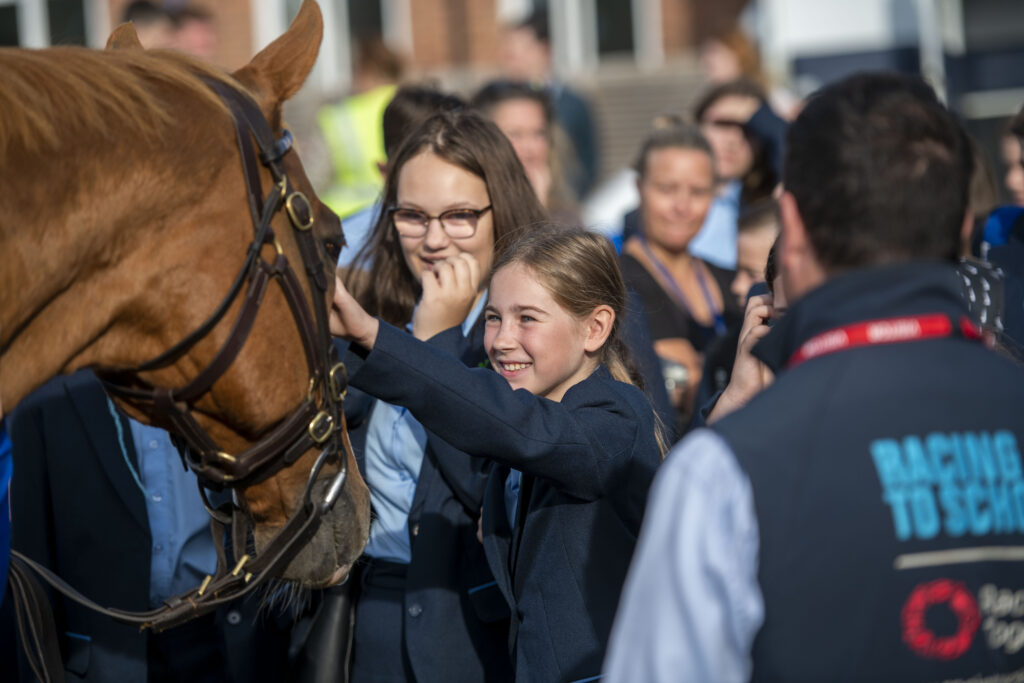 Among the most beloved of the UK Lifetime Care program ambassadors is 2004 Ascot Gold Cup (G1) winner, Papineau. Just this fall, the now 22-year-old gelding launched the new school year at the Newmarket Academy, accompanied school children to pay their respects at the statue of Her Majesty The Queen, welcomed more than 790 visitors during the Sir Henry Cecil Open Weekend, and even brought joy to some patients at the Newmarket Hospital. 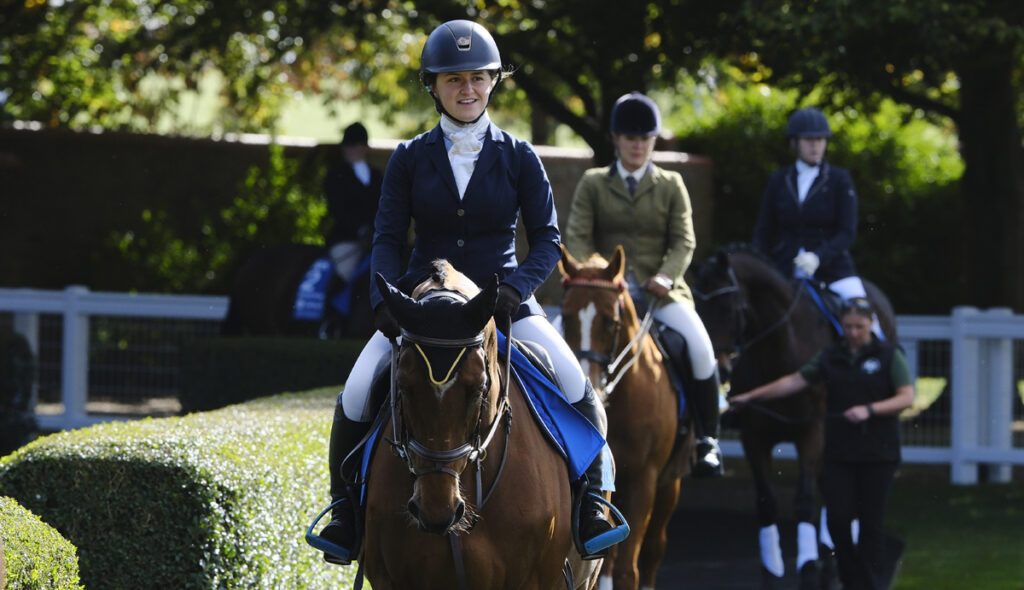 Similar to Godolphin’s efforts in America, the GLC program in Australia provides direct rehoming or retraining, depending on each horse’s needs. The southern hemisphere operation also maintains flag-bearers to represent Godolphin during race parades and open houses. 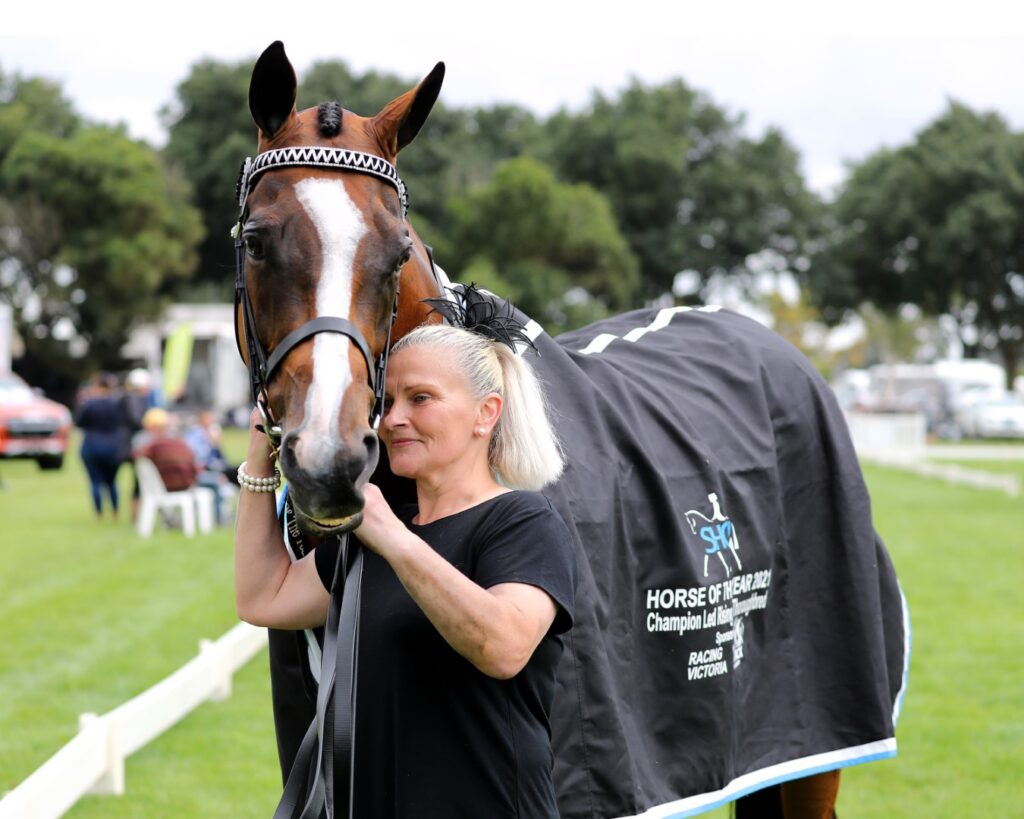 Hartnell and Sheralee Patterson attended the Show Horse Council of Victoria’s Horse of the Year show where they placed 1st in the Off The Track Led and won Champion Led Rising Star Thoroughbred.

“In Australia, the majority of horses that we rehome fit into programs that already exist,” Cooper explained. “These programs really suit the industry and adapt our horses as much as possible for their future careers. Hartnell was a champion racehorse and is now a champion in aftercare competitions.”

Yasuko Sawai has been with Godolphin for 16 years, first working in the Darley Japan foaling barn for 10 years before taking on the responsibility of managing the Japanese GLC program in 2015.

“We do our Lifetime Care program two ways. One, we have a rehoming program for our racehorses and, two, we want to improve aftercare by educating racing people,” Sawa explained. “We have rehomed around 100 horses since 2015. In Japan we use retrained Thoroughbreds a lot, and most Godolphin horses are really popular right now. I have 10 people on the waitlist to adopt one from us. Some people here in Japan have even started to adopt our aftercare program model—time, treatment, geld it, gift it—for their own racehorses coming off the track.” 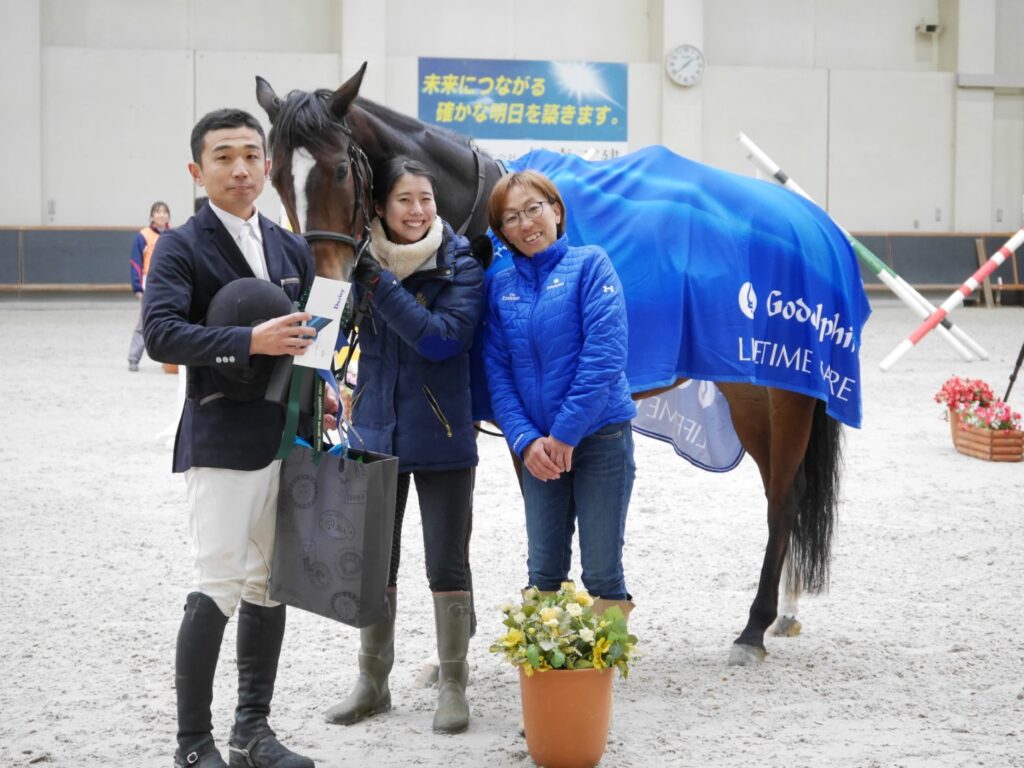 “Stacie came to Japan with Di Arbuthnot back in 2018 and talked to members of the Japan Racing Association,” Cooper said. “The JRA’s development of aftercare initiatives has shown huge leadership. One example is their invitation to (three-time Olympian) Boyd Martin over a number of years to give workshops on retraining Thoroughbreds. To have somebody of his quality explaining the techniques with Thoroughbreds, and the difference Thoroughbreds can make, was phenomenal.” 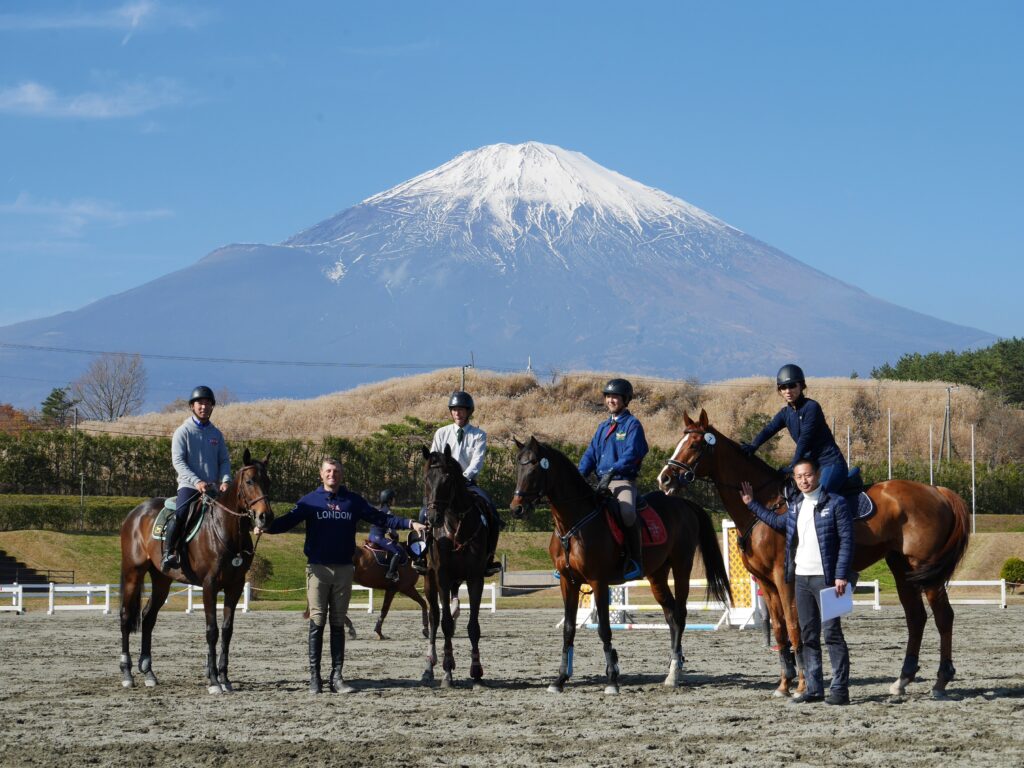 And in 2021 Old Friends Japan—modeled after the acclaimed Old Friends Farm based in Lexington—opened its doors to Japan’s retired racehorses for the very first time.

Cooper also touched on the aftercare efforts going on in Dubai.

“In Dubai the long-term program at the Dubai Racing Club’s retirement home has grown into Dar Al Khail, which means ‘House of the Horse,’” Cooper said. “It had its first race course parade at Meydan on Super Saturday this March, again highlighting the horses that are enjoying another career in Dubai but also allowing the racing enthusiasts and supporters to see those favorites of theirs that are no longer racing.”

Not only did Godolphin formalize in-house aftercare protocol, its desire to improve became the catalyst for aftercare collaboration on a global scale.

“Back in 2015, we invited the world’s leading aftercare providers to come to Lexington and meet at Jonabell (Godolphin’s U.S. farm),” Cooper said. “Fast forward nine months, we held another conference in the U.K. where racing leaders joined the aftercare providers. It was very much the consensus that aftercare is part of the business of the Thoroughbred industry and, as such, the International Forum for the Aftercare of Racehorses was born.”

IFAR serves as a global advocate for the care of retired racehorses, providing resource and networking opportunities to further aftercare education.

“Along with IFAR, we’ve also developed Together for Racing International, which is a community engagement and education arena for our industry,” Cooper said. “In America, Annise Montplaisir, a Godolphin Flying Start graduate, has developed Amplify. Part of its work is to explain to our industry the importance of aftercare, what we do with horses all through their lives, and that similar programs do exist around the world. I think that the element of education is vital and the more it grows, the more aftercare will benefit.”

Click here to read the December 2022 Second Acts article in the BloodHorse for free.