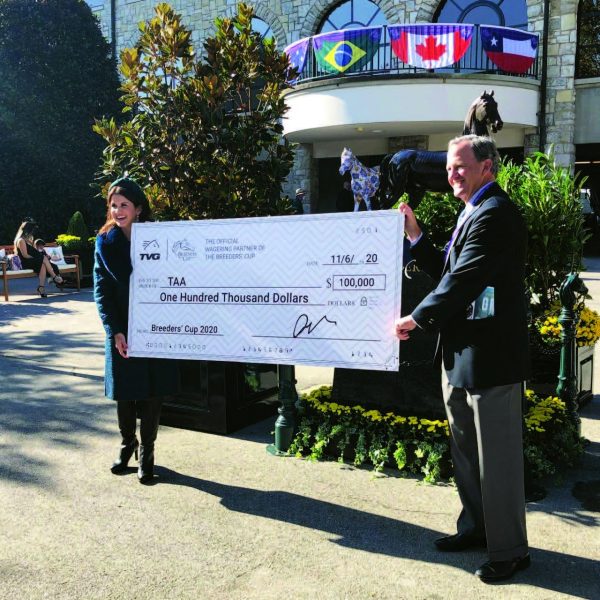 For a long time many in the racing industry gave little thought to the welfare of a Thoroughbred after it finished its racing career but that mind-set has changed in recent decades.

The late 1990’s and early 2000’s saw a number of unfortunate incidents on and off the racetrack involving horse racing legends such as Exceller, Ferdinand, Barbaro, and Eight Belles. The losses of these horses and others not only affected the racing industry, but rallied equine welfare advocates and shaped the general public’s opinion as well.

As a result, equine welfare organizations began sprouting across the United States, but these organizations went unregulated and underfunded. Spurred by the crisis before them, major racing industry pillars began conversations on the best ways to combat racing’s poor public perception and ensure racehorses have a safe and dignified life upon retirement from racing and breeding. In October 2011 a strategic planning session was held at Keeneland’s Keene Barn to formalize an actionable plan to protect equine athletes and ultimately horse racing. In attendance were leaders from Breeders’ Cup, Keeneland, and The Jockey Club, among others.

Out of this meeting came the idea for a new association on the issue. By 2012 the Thoroughbred Aftercare Alliance was founded. Funded initially by seed money from Breeders’ Cup Ltd., The Jockey Club, and Keeneland, the TAA declared a mission to accredit, inspect, and award approved aftercare organizations grants to retrain, retire, and rehome Thoroughbreds through funding derived from all aspects of the racing industry.

In the 10 years since its inception, the TAA has remained true to its objective. California Retirement Management Account (CARMA) founder, Madeline Auerbach, and Breeders’ Cup executive vice president and chief racing officer, Dora Delgado are among those instrumental in the TAA’s formation. They fought tirelessly for a decade to facilitate the TAA’s growth and stature within the industry, and are still active supporters of it today. As such, what two better people to sit down with to reflect on the past 10 years of unprecedented progress, ahead of the TAA ringing in its tin anniversary at the 2022 Breeders’ Cup World Championships hosted by Keeneland.

AK: How much has the landscape changed in 10 years?

MA: It’s hard when people weren’t around at that time to understand what happened. You have to put yourself in the frame of mind of going back 10-plus years. The industry always has problems, but we had very serious, very dangerous to our business problems with what happened with Eight Belles and things of that nature. The industry was in a crisis …

Now we can point to the things that we do as an industry, and it’s vital that the industry has a spokesperson, a spokes-entity, where these media outlets can go when they want information.

I think most people would say that The Jockey Club, Keeneland, and Breeders’ Cup are major leaders in the industry. We needed those three entities together. They are three parts of the stool that supports our industry— the racing industry—and they had to be on the same page. At the time, the Breeders’ Cup was under Craig Fravel’s leadership. They were 100% in, just as Keeneland and The Jockey Club were.

AK: Without question, the Thoroughbred Aftercare Alliance would not have gotten its feet off the ground without the Breeders’ Cup, The Jockey Club, and Keeneland stepping up with initial donations of $100,000 each. What was the significance of Breeders’ Cup being a seed money donor for the TAA?

DD: The idea was broached to have an accreditation process for some of the retirement homes that were already out there and for new ventures that wanted to get involved. We knew there was some groundswell movement, and I think all of this really had stemmed from the tragedy [of Ferdinand] over in Japan. It opened people’s eyes that we need to take care of these horses. So I think for us [at Breeders’ Cup], it was a really easy step—to say we want to do something, to say we want to be part of something bigger and have the industry come together and make sure we give horses a soft landing when they retire from the racetrack.

MA: That seed money is the only reason the TAA exists. We wouldn’t be here without the $100,000 each from those three entities. It never would’ve taken off the ground because nobody would’ve had the money to start it. In essence, those three organizations put their money where their mouth was and they turned it over to those of us that were trying to put it together and trusted us to spend it cautiously, wisely, and correctly.

Over the past decade the TAA has worked steadily to increase the amount of accredited aftercare organizations under its umbrella and the number of donors within the racing industry to supply the grant funding for retired Thoroughbreds being cared for by those organizations. However, the TAA did not immediately explode on the scene in terms of horsemen’s understanding as to how it differed from every other aftercare nonprofit.

The Breeders’ Cup recognized this struggle early on and knew it had to be one to show the rest of the industry who the TAA was and why the organization deserved support.

AK: In what ways have Breeders’ Cup and TAA worked together in the past 10 years?

DD: Initially when the TAA first got started, there was a stallion funding mechanism. Since we were already involved in billing stallions for the Breeders’ Cup, that was part of our early, initial efforts to help. We also tried to include ads in whatever publications we were doing. We’ve become much more focused on that in recent years.

As we’ve had vehicles created to help push the Breeders’ Cup messaging, it’s a very easy thing to add on: ‘Please support the TAA.’ The work is so important. All of our outgoing nominations messaging has a TAA message on it, and we reach such a wide audience. Anything we can do to help and promote the mission of the TAA is something we’re invested in. 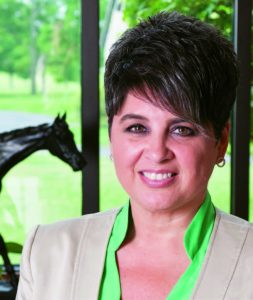 Not only did the Breeders’ Cup propel the TAA into the spotlight on its race days, it provided opportunities for other facets of the industry to honor the TAA with monetary support— the most significant of those being from FanDuel TV. Since 2019, the premiere race of Future Stars Friday, the TVG Breeders’ Cup Juvenile (G1), has been sponsored by TVG (now FanDuel TV), and in 2020 the FanDuel-owned online racing and wagering network invited the TAA to present the race, followed by a check presentation of $100,000. This partnership has become an annual appearance.

AK: Why is it important to highlight the TAA at an international event such as Breeders’ Cup?

MA: When we have the attention of the world, which the Breeders’ Cup garners, it is extremely important for us to show the unification of everybody in racing that we will care for our equine athletes. The one threat that everybody faces, whether it’s here, or Europe, or Australia, or any racing venue, is the public perception of what happens to these athletes when they’re done racing. We are the shining star on the hill that says, ‘Hey, we have all of these organizations whom we work with, whom we help, whom we monitor, whom we identify, whom we accredit, whom we work with to make sure that all these horses are well-cared for.’ This messaging is vital with the amount of scrutiny that racing is constantly under.

DD: Designating TAA as our official aftercare partner was a no-brainer for us. It’s such a great opportunity to expose a worldwide audience to the marriage of championship racing and dedicated aftercare. It’s a great message, not only for our fans here, but for fans on a worldwide spectrum. To tell them that racing is not all about the millions of dollars, right? It’s not all about the fancy dresses and the big-ticket seats. It’s also that you’re going to witness beautiful animals, putting it all out there for their owners. And in return, their owners and the people that care for them are going to make sure that they have a good retirement. 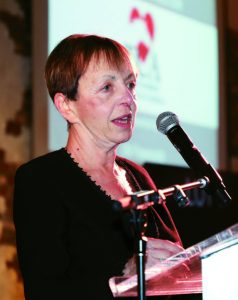 Every TAA-accredited aftercare organization is held to a detailed code of standards that ensures the lifetime health and safety of every Thoroughbred who enters the program. The TAA provides grants to its accredited organizations that are dispersed based on the individual needs of each organization, and all grant recipients are legally bound to use their grant directly for the care of their retired racehorses.

Despite 10 years of hard work, there are still those within the industry that do not see the value of supporting the TAA.

AK: Why is it important for organizations from every facet of the racing industry to support the TAA?

DD: We needed to make sure that other industry organizations also knew that TAA was our designated official aftercare partner. There are so many good organizations out there, but they need to be kind of cohesive under one umbrella, which is what we really favor in making sure that TAA is the recipient of any Breeders’ Cup funding. The funding itself is just a pass-through really, from our nominators. In essence, they are the ones providing the funding that we make an annual contribution to. For us, it’s a real measure of how we want to support the industry and how we want to do the most good. 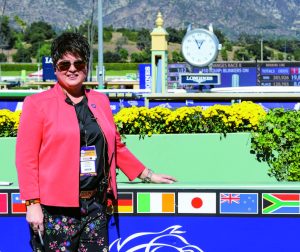 In the past 10 years, racing’s greatest victories have had little to do with purses, payouts, and sale-toppers, and more to do with the massive strides the industry has taken to advocate for equine health and safety.

AK: In preparing for the future, the TAA is fortunate to have some of racing’s most influential institutions in its arsenal. Where do you see the TAA in the next 10 years at BC?

MA: The Breeders’ Cup, Keeneland, and The Jockey Club need us to be strong. They are our partners and our parents, and we work at their behest. They put up the money, they told us to do a job, and we’ve done that job. And now it’s up to them to say what they want next. How do they see the next vision? We have a lot of ideas. We know what needs to be done. I would like to see the recognition of what the TAA’s mission is across the board.

DD: We want to make sure that if you were good enough to make it to one of racing’s biggest events that you have a way forward out of racing because things happen. Horses get injured; they may not be life-threatening injuries, but they may be career-ending. I would love to see a more formalized tie-in between running in our races and being ensured of a retirement path. I think there’s work that could be done along those lines.

DD: The last 10 years have been really encouraging, and especially the last five years in terms of Thoroughbred aftercare. Between major racetracks getting involved in funding and owners taking more responsibility for their horses’ retirement, we have vastly increased aftercare awareness. There is a really positive momentum that’s in the industry right now.

Amid the glitz and glamour of this year’s World Championships at Keeneland, the TAA rings in its 10-year anniversary with the hope that aftercare momentum continues to grow, bringing more horsemen into the fold, and demonstrating the dedication of the industry to its lifeblood—the horse.

Click here to read the October 2022 Second Acts article in the BloodHorse for free.