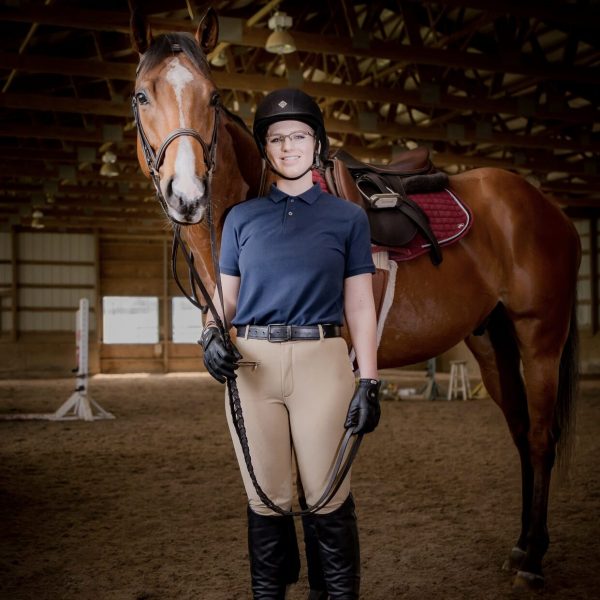 In his 11 starts, Eiteljorg visited the winner’s circle twice before retiring. The son of Jazil made his way to TAA-accredited Secretariat Center, and quickly drew interest from a rider who was familiar with the gelding through his on-track connections.

“I knew about Eiteljorg’s racing career as I was growing up because of my family’s connection to his previous owner,” adopter Justine Stanley said. “When I was looking for a horse, he was just recently available for adoption through the Secretariat Center. It was like the stars aligned for us to teach and learn from each other.

“The first time I rode him, he didn’t seem to have much to him, but when we brought him home, his personality blossomed.”

Stanley was looking for a reliable mount that could become a hunter/jumper and travel with her to college. And what she got with Eiteljorg was much more.

“Eiteljorg is vocal and loud in his opinions, but always willing to give his all,” she said. “He’s strong, forgiving, and adaptable, which is perfect for a horse I’m taking to and from college this year.

“Eiteljorg is doing great after a few setbacks made us almost have to start over. I’ve always been a hunter/jumper rider, but we both explored dressage together as he came back into work and he found a love for that, too.”

As the duo learns to dabble in other disciplines, nothing seems out of reach.

“Currently, the jumps are only getting higher for him and he’s becoming a fearless ride,” Stanley said. “I would love to explore eventing with him, since we already have the pieces of jumping and dressage under our belts.

“It’s been a blast exploring different disciplines with him and I’d love to continue trying more new things.”