From Dusk to Dawn to ‘Dusky’ 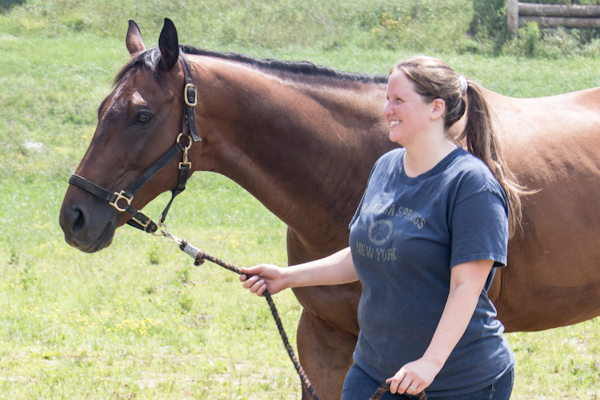 A shared love for horses between a father and his young daughter would bloom again years later when Heather Rio adopted Dusk to Dawn—a former competitor on the New York Racing Association (NYRA) circuit—through TAA-accredited Thoroughbred Retirement Foundation (TRF) in the summer of 2018.

The New York-bred, who is now known as “Dusky”, fulfilled Rio’s yearning to own a riding horse after years out of the saddle and, perhaps more importantly, provided her and her father, Joe Tamborello, with many meaningful moments in their final months together.

“My dad was only 60 when he died from lung cancer this September,” Rio, 33, said with a catch in her voice. “He was a huge horse person and did rodeo when I was growing up. I was around horses from the time I was 2 until I was 19. Growing up on Long Island, we had horses in our backyard. My dad had me on a horse when I was 2.

“When I got Dusky, I would send my dad pictures and videos, constantly. We had a lot of Quarter Horses when I was growing up, but Dusky is my first experience with a Thoroughbred, so my dad was so, so proud of me. He was learning with me too. Three weeks before he died, he visited me for nine days and he actually got the chance to ride Dusky. My dad was so amazed with the work I did to get Dusky to listen to my commands.

“We love our Dusky boy so much and our goal is to just make sure he is happy and healthy because he brings us so much joy and happiness and has changed our lives.”

This is not the first time Dusk to Dawn has had a meaningful impact upon a person’s life; he truly has been the gift that keeps on giving.

A son of Malibu Moon, Dusk to Dawn raced without distinction at each of NYRA’s tracks, Aqueduct Racetrack, Belmont Park, and Saratoga Race Course, for his owners and breeders, Chester Broman and his wife, Mary. The Bromans are stalwarts on NYRA’s racing circuit and are pillars of the state’s breeding industry. They have scripted so many success stories with horses they have owned and bred, but Dusk to Dawn was not one of them, at least not on the racetrack.

After Dusk to Dawn failed to win a race from eight career starts from 2014-15, the Bromans decided to retire him in September of 2015 and looked to the TRF to find him a good home.

TRF had the perfect plan for Dusk to Dawn, and it was one that didn’t require any effort on his part. All the gelding had to do was be himself, and he would become a life changer for the inmates of the Wallkill Correctional Facility in upstate New York.

For the past 35 years, the TRF’s Second Chances program has offered a unique avenue to Thoroughbred aftercare. It first brought retired racehorses to the Wallkill Correctional Facility in 1984 to teach equine care through the institution’s vocational instruction curriculum.

With Wallkill as its blueprint, TRF grew the TRF Second Chances program through partnerships with prisons in several other states. Graduates of the program are taught skills to pursue new lives as contributing members of society upon completion of their incarceration while providing thousands of retired Thoroughbreds with a lifetime of high-level care.

The TRF is a nonprofit organization and thus dependent upon donations to operate. The TRF is accredited through the nonprofit Thoroughbred Aftercare Alliance, which accredits, inspects, and awards grants to approved aftercare organizations to retrain, retire, and rehome Thoroughbreds using industry-wide funding.

The NYRA—whose senior vice president of racing operations, Martin Panza, is a TAA board member—and its horsemen are staunch supporters of the TAA. In collaboration with the New York Thoroughbred Horsemen’s Association, NYRA, with the start of the 2019 Saratoga Race Course meet, began placing a 1.5 percent assessment fee on all claimed horses at its tracks with the proceeds going to the TAA and the NYTHA-administrated retirement program and TAA aftercare partner, TAKE THE LEAD.

In 2014, NYTHA adopted a per-start fee for owners of $5 that provided funding to the TAA. Two years later, NYRA began matching contributions to the TAA, and from 2016-18, NYRA generated in excess of $230,000 for TAA funding. This summer the per-start fee was increased to $10.

In 2018, NYRA implemented the option for horseplayers cashing a winning ticket through a self-service terminal at its tracks to make a donation to the TAA.

“The first TAA discussion took place at Belmont Park, organized by a group of industry stakeholders who wanted to make a difference,” said Stacie Clark Rogers, TAA’s operations consultant. “Truly an industry-united initiative, we’re proud of the way that the TAA has grown and our numerous accredited organizations.

“TRF has been accredited since 2015 and is one of seven accredited organizations in New York. TRF’s program, especially its great Second Chances program, plays a vital role in the region.”

In 2017, TRF designated Dusk to Dawn to be one of its ambassadors for its Saratoga Summer Farm program. The free-to-attend events [donations are welcome] allow visitors to meet and greet horses and to learn about TRF and its adoption practices and programs, such as Second Chances. Dusk to Dawn was once again part of the Summer Farm program in 2018.

“A lot of racehorses just need some down time after the racetrack, a few months, maybe half a year, but Dusk to Dawn got almost two years to just be a horse at Wallkill,” TRF’s National Herd Manager Sara Davenport said. “The inmates worked with him and when we moved him to the Saratoga Summer Farm, he was eager to please and enjoyed being around people.”

One of those people was Rio, who after reading about the Summer Farm program in a local paper in 2018, went with her husband, Joe, to get her “horsey fix and to donate.” Yet she had no idea that the horses there would be available for adoption. After seeing Dusk to Dawn, Rio was smitten and pounced on the opportunity to make him her very own.

“He was in the back paddock with another horse and when I first saw him, he was running through the paddock,” Rio recalled. “He was the most stunning thing I’ve ever seen. I was like, ‘Wow. He’s beautiful.’ He was graceful and amazing.”

Dusk to Dawn is currently stabled at Kit N Kin Ranch in Warrensburg, New York, not far from Rio’s home in Queensbury. One of the first things that Rio did after adopting Dusk to Dawn, was to scour NYRA’s website for replays of his races. She was so entranced by seeing him in action, she would pause the videos and snap photos of her new horse and add them to a room in her home she has dedicated to Dusky memorabilia. She also looked up his race record and memorized the names of the jockeys who rode him. This past summer when her father saw a television promo for a jockey-signing autograph event in Saratoga, there was no holding back Rio.

“My dad knew I wanted to meet Jose Ortiz, who finished second on Dusky, his best placing,” said Rio, her voice still full of enthusiasm for her encounter with one of NYRA’s leading riders. “I was afraid the event would be mobbed, so my dad and I sat in front of the store for three hours before it started because we wanted to make sure we got Jose’s autograph on a photo of Dusky racing!”

Rio, who will give birth to a baby girl in two months, is leaving the riding duties these days to her husband.

Her nephew, Mikey, who suffers from a rare chromosome disorder, also pitches in by taking Dusky on walks.

“I’m so happy that Dusky will be there so my daughter will be able to grow up with the lifestyle I did and be around horses,” Rio said. “My dad gave that to me and it will be so incredible to be able to do that for her.”

And thus Rio’s family tradition will continue, and Dusky will keep on giving.