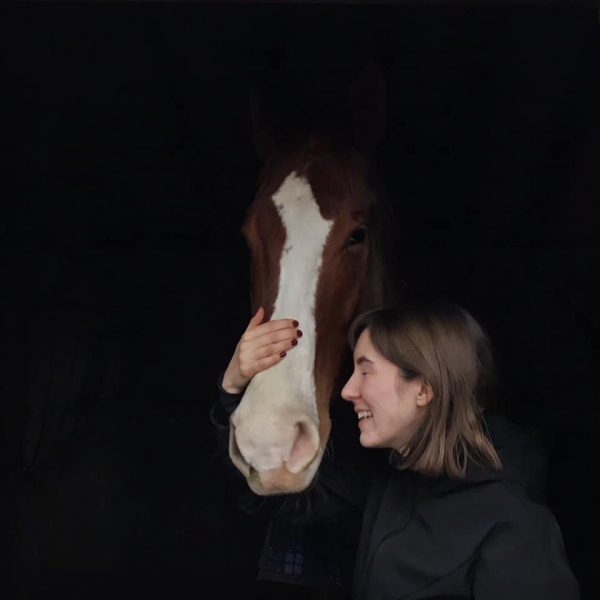 When Karen’s Gotta Go, a chestnut son of Street Magician, met his future adopter the first time, he made his presence known by playfully grabbing her hair.

“Within minutes of first meeting ‘Sully,’ he actually grabbed me by the hair,” adopter Lexi Osterhoudt recalled. “He made it very clear, especially at age 4, that he is a very emotional horse. Anything that upsets him, even unintentionally, is met with personal offense, which also was evident by his tendency to drag me to the corner of the ring instead of where I wanted him to go during our first test ride, as he wanted to go be with his friends instead.

“However, over the course of two (test) rides, we reached an agreement and I discovered that positive reinforcement and lots of praise was key to convincing him that whatever we were doing was a good time.”

Throughout the trial process at TAA-accredited New Beginnings and despite his antics, the New Jersey-bred won Osterhoudt over. The gelding never made a start on the track but was a resilient horse who battled an antibiotic resistant bacterial infection for a year at the New Jersey Equine Clinic.

“On the back of ‘Sully’s’ left front leg, right over the middle of his flexor tendon region is the giant pink, hairless scar resulting from the surgery and skin graft performed at the clinic,” Osterhoudt said. “While initially, there were some concerns, the vet supervising his treatment assured us that while it was ugly, she expected him to have a bright future.”

Scar or not, his new adopter was won over by his personality, which had made an impression on his previous owners as well.

“There was something special about him, how forgiving he was, how patient he was, and how he seemed to take such pride in doing right by his ‘people,'” Osterhoudt said.

“And he had quite a following—I actually didn’t get to keep his race halter, because one of his race owners or trainers wanted to hang onto it for sentimental value. He had obviously left hoofprints on many hearts, and he had already planted one on mine.”

Now, the duo are moving forward in his retraining, but at their own pace as they learn to work together and overcome some mental roadblocks for “Sully.” And even though the gelding has pulled some hijinks that have required some veterinary assistance, Osterhoudt says he remains his upbeat self and seems to take pride in his retraining. 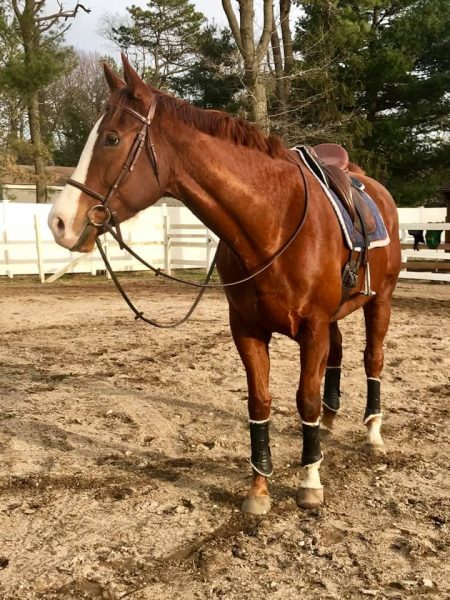 “Patience has been key with Sully,” she said. “Being that we’ve had to re-start about a half-dozen times, I’ve learned that the joy isn’t in the destination but in the journey. He continues to amaze me every day, and I really think he’s proud of what he learns and strives for success.

“We’ve become the very best of friends navigating all of this together, and it warms my heart every time I hear his whinny when he sees my car pull up to the barn. I love him more than I could’ve anticipated, and he knows it.”

While the future is unknown, Osterhoudt and “Sully” are content at taking it one day at a time while they focus their energy in the dressage arena.

“At this point, we’re going with the flow. I initially adopted ‘Sully’ with goals to event, but he really shines in dressage,” she said.

“We’re working with an incredible trainer and trying to slowly but surely train up the levels in dressage. I think it was the right choice for us both, I love it and ‘Sully’ has so much potential. We’re rehabbing a re-injury of an old tendon currently, so the short term goal is to get him healed up, but who knows where life will take us next.”