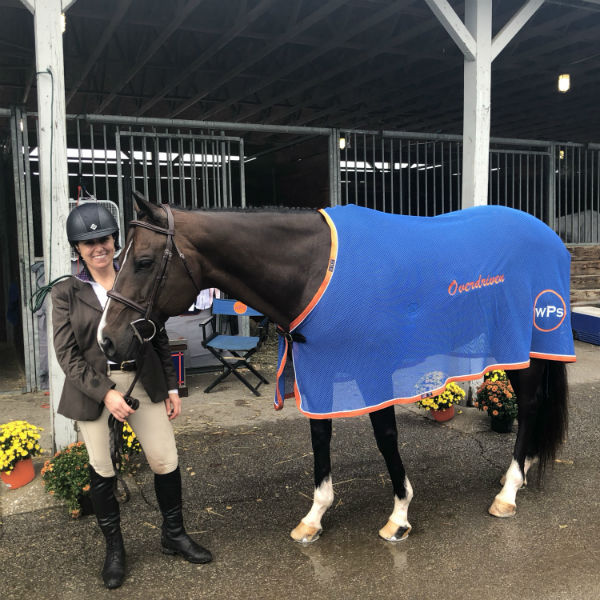 A graded stakes winner on the track, a stallion represented by a few winners, and now a show horse. Overdriven is taking his third career in stride.

After only three starts, including a win in the Sanford Stakes (G2), Repole Stable’s runner was retired to the breeding shed. But after a few seasons, the son of Tale of the Cat and half brother to MGSW Smooth Air wasn’t working out commercially, so he headed to TAA-accredited New Vocations to start a new journey.

Read more on the backstory of Overdriven’s journey to New Vocations in the BloodHorse.

That’s when he was spotted by Dara Woitkowski.

“I had inquired about another horse at the Lexington facility and started the adoption process,” she said. “Not a day later, as I was scrolling through the New Vocations website to show a friend the horse I was interested in—Overdriven appeared. My heart stopped.

“Matt (her husband) and I used to follow Overdriven on the track, even visited him at Todd Pletcher’s barn so I knew he was the one.”

Even though he had a brief stint as a stallion, Overdriven has transitioned to his new job smoothly and that famous OTTB work ethic is shining through.

“Overdriven loves to work and is a true professional athlete,” Woitkowski said. “He learns super quick and just wants to do his best each day.

“He hasn’t put a foot wrong—he’s even been in a two-stall trailer with a mare with no issues. He’s a classy boy.”

Now, the pair are both facing a new adventure together: the show ring.

“I never entered a horse show before, never had the desire, but when he walked into the barn I knew that was going to change,” Woitkowski said.

Giving it a try, she brought him to the New Vocations All-Thoroughbred Charity Horse Show and T.I.P. Championships back in September at the Kentucky Horse Park. The duo was second in the T.I.P. In Hand Class for geldings and placed in a number of walk-trot classes. Woitkowski said her sights are set on the 2019 show and more advanced classes, as long as Overdriven is up for it.

“He likes a challenge, so my goal is to keep his mind engaged and make sure he is excited doing his job,” she said. “As long as he’s happy and healthy, I’m good.”