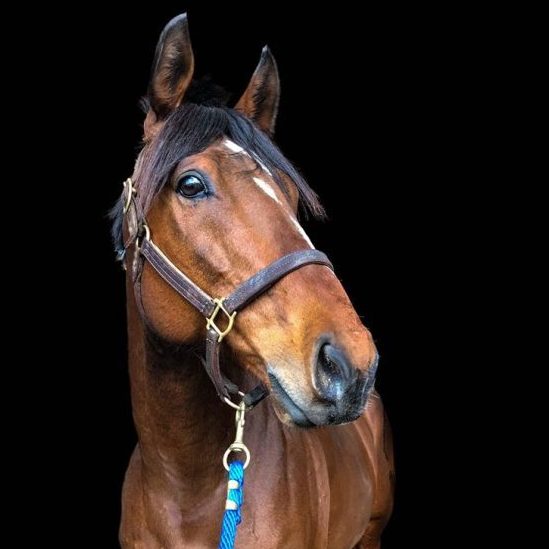 Usually it’s when you’re not looking for something that you find exactly what you need. And that’s what happened to Tori Tedesco when she spotted a bay gelding at TAA-accredited New Vocations at their Mereworth Farm facility in Lexington, Ky.

That gelding was Smart Transition, a son of Smart Strike who won the 2015 Curlin Stakes at Saratoga Race Course.

“Dr. (Michael) Hore (of Hagyard Equine Medical Institute) and I do voluntary work at New Vocations once a month or so, and this past time we were there, Smart Transition was in the newest group of horses that we were X-raying. We tend to help with X-rays, ultrasounds, and pre-sale examinations for free,” said Tedesco, who works as a vet tech at Hagyard.

“I was casually looking for a horse but had definitely given up since I was having such bad luck. It was a very big decision for me since this is the first horse I have personally owned. I wanted to make sure I found not just a sound horse but a companion and one that clicked well with me and our personalities matched.”

And the striking bay at TAA-accredited New Vocations fit the bill. Bred and campaigned by Arnold Zetcher, Smart Transition earned more than $210,000 in a 10-race career that spanned both coasts. After running fourth in the 2015 Dwyer Stakes (G3) at Belmont Park, the John Shirreffs trainee came back to win the 1 1/8-mile Curlin Stakes at Saratoga by 4 3/4 lengths. He failed to hit the board in his next four starts, including a sixth-place run in the Travers Stakes (G1) behind winner Keen Ice and Triple Crown winner American Pharoah.

“I’m a sucker for big bays, which he is,” Tedesco said. “When we were X-raying him, he was so sweet and his temperament was unreal. He is definitely the ‘in your pocket’ type who was loving attention and scratches–which is a must for me.”

And it seems like the attention-loving gelding is in luck with Tedesco as his owner.

“This horse is going to get so much attention and paparazzi from me, he had to have an ‘I love people’ personality,” she said. “And, as crazy as this sounds, I love a horse with a crazy eye. He’s so funny when he looks at you from the side or is doing something silly—you can see his crazy eye. He makes me laugh.

“Then when I looked into him and found out about his racing background and where he came from, I was even more interested. He’s just the perfect horse. He has a lot of life in him, but he’s still genuine.”

For now, Tedesco doesn’t have a set plan for Smart Transition other than enjoying his company.

“… We’re just going to see where he takes me. Since he has no issues, I’m up for anything he’s up for.”