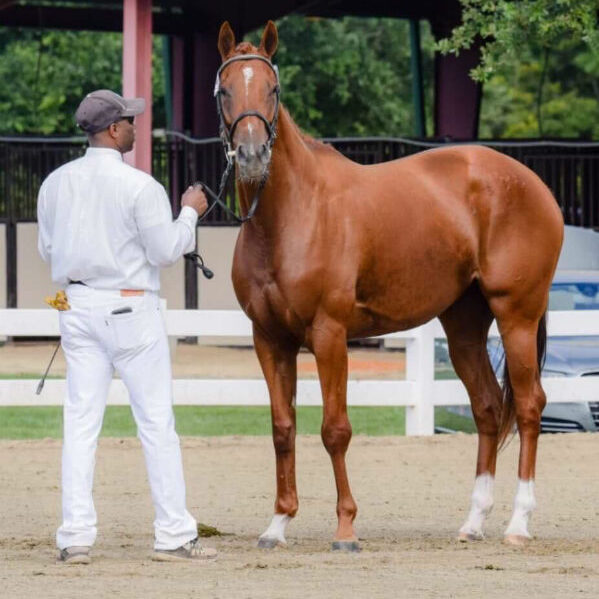 In her 10 starts, Zenna only found the winner’s circle once, but the daughter of Majesticperfection is finding her calling in the show ring.

Retired to TAA-accredited MidAtlantic Horse Rescue by her racing owner Matthew Schera, she was sent to the organization’s satellite farm in South Carolina. When she stepped off the trailer, trainer Heather Carlson said she was immediately won over by the filly.

“I was pretty in love with her when she arrived. She is beautiful and such a nice, kind mare,” Carlson said.

Unfortunately right after the New York-bred arrived, she had an accident in her paddock at night and fractured her accessory carpal bone in her knee. Carlson said Zenna handled the time off, rehab, bandaging and re-bandaging, and stall rest like a pro, and when she eventually was ready, Carlson entered her in a Danish Warmblood broodmare inspection in South Carolina. Zenna more than held her own as the only Thoroughbred present—she won the broodmare class and was accepted into the stud book.

But for now, Carlson is just happy to spend time with her.

“I really just love having her around,” she said. “She always comes to me when I call her. She is super special to me. I am so grateful to have her.”