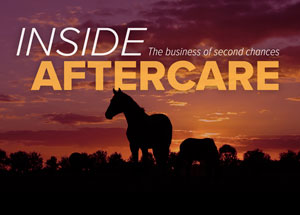 The inaugural $12 million Pegasus World Cup Invitational (G1) Jan. 28 at Gulfstream Park created a whole lot of buzz with its unique set up, the rematch between California Chrome and Arrogate, the largest purse in the world, the Pegasus Win-Win Sweepstakes, and its own branding initiatives calling racegoers to “be part of history.”

However, it wasn’t just the race or the sport itself benefiting from the big-time promotions, but aftercare as well. The Thoroughbred Aftercare Alliance was one of three official charity partners for the Pegasus World Cup events, along with the Permanently Disabled Jockeys Fund and the After The Impact Fund for Veterans and Legends.

As a charity partner, TAA had its own presence on the day—the TAA presented a Best Turned Out Horse Award for the Pegasus Day races (sponsored by StarLadies Racing); was featured in a short commercial during the day’s simulcast; and hosted a meeting of the champions between two-time Horse of the Year California Chrome and polo champion Nic Roldan, among other online and on-track promotions.

Click here to read the entire article on BloodHorse.com.