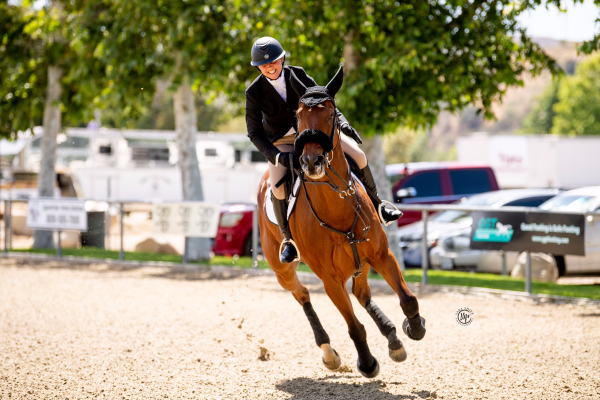 The life of a racehorse comes full circle, thanks to the many individuals who saw the potential in one retired Thoroughbred.

Anyone in the horse industry can attest that no matter how much thoughtful planning and hard work are put into caring for a horse, things can change in an instant—for better or for worse. Luckily, sometimes unexpected changes are just an opportunity to gain a different perspective.

Crosscheck Carlos could have been a great racehorse, but through a series of good and bad events, he was given the opportunity to experience life from a new point of view.

Bred by Allen Guillotte Jr., Crosscheck Carlos was foaled in 2015 out of stakes-placed Weepnomoremylady (by Summer Squall). A half brother to Louisiana Cup Distaff Stakeswinner Flower Lady (by Flower Alley), Crosscheck Carlos was acquired by Erik Johnson and Dennis O’Neill at the Ocala Breeders’ Sales March 2-year-olds in training auction for $37,000. The son of Custom for Carlos made most of his eight career starts for trainer Doug O’Neill, under the ownership of Johnson’s ERJ Racing, Slam Dunk Racing, and Neil Haymes. True to his Louisiana-bred roots, in his second start Crosscheck Carlos won the $100,000 D. S. Shine Young Futurity at Evangeline Downs.

“Crosscheck was a very willing, athletic, and competitive horse; the type to separate himself from the pack,” Doug O’Neill recalled. “He was a real pleasure to work alongside.” 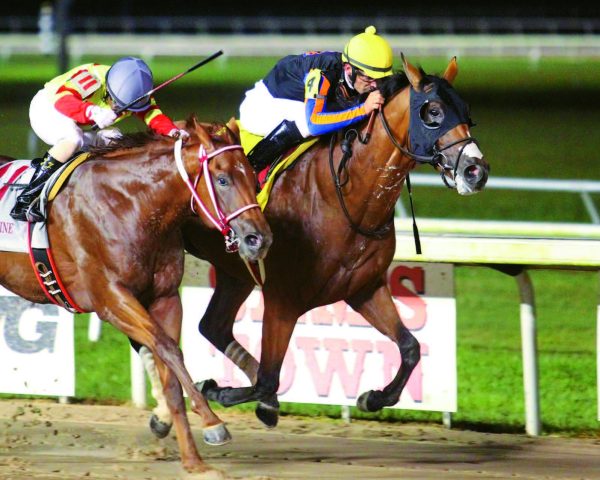 Unfortunately, after finishing second best in his 3-year-old debut, the stakes winner suffered a career-ending sesamoid fracture. Despite the uncertainty a diagnosis of that severity can bring, Crosscheck Carlos had all the right people on his side.

“You take on the responsibility and the honor to work alongside these amazing horses and you take care of them every day they’re with you,” O’Neill said. “When they no longer race due to ability or injury, it’s our responsibility to help them move forward in the next chapter of their life.”

Unbeknownst to “Carlos,” he’d already caught the eye of Brooke Abbard during his time on the track, and she was ready to give Carlos the soft landing he needed to get back on his feet.

“I took Carlos from Doug O’Neill right after his injury,” Abbard said. “I specifically asked for him because I knew him from the barns. I manage a racing stable at the track, so I’m around all the racehorses all the time and Doug O’Neill is one of our trainers.”

Abbard transported the 3-year-old to her barn off of the track where they began the long road to recovery. In time, Abbard hoped Carlos would make a dependable trail partner.

“You never know how the sesamoid is going to heal; if it’s going to heal perfectly or if they’re not going to be able to have a second career,” Abbard said. “He stayed in a stall in my barn. I hand-walked him three times a day, wrapped it and unwrapped it every day. A lot of work went into healing him successfully.” 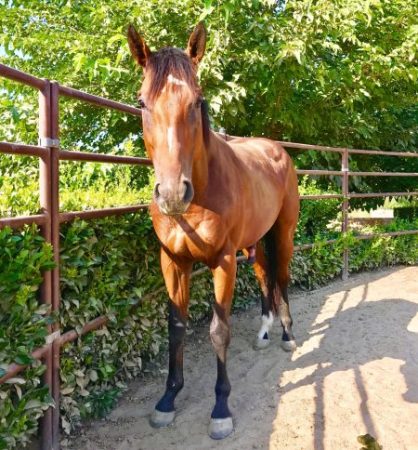 After nearly two years with Abbard, Carlos’ playful, intuitive nature shone bright. It was apparent the gelding was ready for his next adventure.

“Carlos was a special horse,” she said. “He would help me rebed his stall every day. I would just throw a bag of shavings in there and he would undo the bag and fluff his own stall for himself.”

Abbard did more than just heal his injury, she ensured Carlos was prepared to find his forever family.

Enter Manon Prat, wife of successful jockey Flavien Prat. Before moving to the United States, Manon Prat grew up in France, competing in show jumping and eventing, but her passion for the track eventually took over and she made the decision to pursue exercise riding full-time. She worked on the backstretch as an exercise rider both in France and the U.S. for nearly 10 years.

After the birth of their first child in 2018, Prat made the tough choice to quit galloping and focus more on her family. Prat felt at a loss without riding on a daily basis, so the new mom decided to trade in morning breezes on the track for something a little slower—an off-track Thoroughbred.

“Horses are my life; that’s something I need, I’m not whole if I don’t have that,” Prat explained. “My husband told me, ‘If you want a horse, I know you like jumping, so maybe you should start jumping again.’ Then, we started looking to get a horse.”

Prat began getting back into the swing of English riding with fellow racetracker Maria Falgione, who was retraining two off-track Thoroughbreds and would have Prat out to ride with her. Around the end of 2018, two worlds collided when Abbard sent a certain recently rehabbed stakes winner to Falgione for her to consider buying. With two horses already on her plate, Falgione called Prat, suspecting Crosscheck Carlos might be just what she is looking for.

“Maria had two horses at the time that I would ride,” Prat recalled. “They were nice horses, but for whatever reason, I had no attachment to them and they were for sale as well. But you know that kind of thing where you just get on a horse and get that feeling? When I got on Carlos, I really, really liked him. He’s everything I was looking for in a horse.” 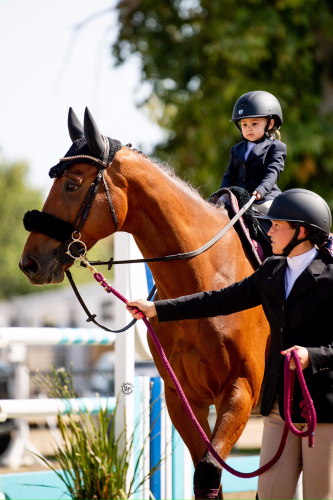 One can’t help but admire the synchronicity. Prat and Carlos each went through huge changes in their livelihoods over the past two years, involving changes to their physical and mental selves, but each leaned on the connections they had made along the way, ultimately leading to one kismet moment.

As if that weren’t serendipitous enough, when Flavien asked his wife the name of the bay Thoroughbred who had captured her heart, another connection was realized.

“Flavien was the first jockey Carlos had on his back and the jockey he won his first race with,” Manon Prat explained. “That was pretty cool because we had no idea when we made arrangements to buy him. So he actually had a pretty cool story; now he has his life with me, but he also had history with Flavien in his previous life.”

Manon Prat and Carlos settled in at a quiet boarding facility where they could take the time to get to know one another. After a few months of getting acquainted, it was time to move on to a barn more focused on jumping.

“I was into eventing, but I haven’t done anything like that for at least a good 10 years,” Prat said. “I needed to learn the basics again and I wanted to do that with a horse that had to do so as well; that way we could learn together. I didn’t want to get a horse that knew everything already. When I got on him, he knew how to go over a cross rail, but that was pretty much it.”

When the pair had progressed enough to start thinking about entering a show, they set their sights on the 2020 Thoroughbred Classic Horse Show at the Los Angeles Equestrian Center. However, as the world went into quarantine, horse shows came to a halt. The following year, Carlos’ training had progressed even more and he was ready to enter his first official event as a show jumper.

“It was a big show. We started with an A-rated show, which usually when you start showing you go to unrated shows,” Prat recalled. “It was a little bit stressful for me and for him too. I could tell he was a Thoroughbred when we got there, that part of him completely came out again. But it was a good experience. We had fun, which is what this is all about.”

Although they didn’t win any first-place ribbons, Prat and Carlos gained invaluable experience and confidence. A few months later they competed in their second A-rated show at Hansen Dam Horse Park in Lake View Terrace, Calif., where they won the .85 meter Pre-Child/Adult and the .90 meter Modified Child/Adult jumper classes, and ended up champions of their division.

Despite the gratification of hard work paying off, Prat admits she would love Carlos all the same even if he hadn’t been capable of jumping. Thoroughbreds might be bred for speed and strength, but what they possess most is heart. 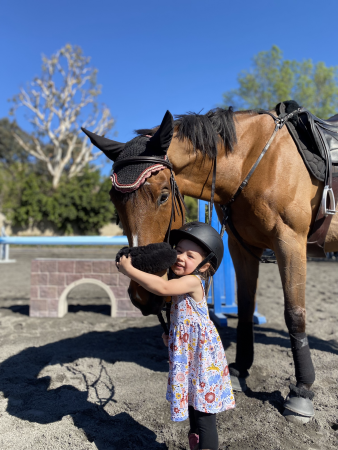 Of Carlos’ many positive attributes, his undeniable athleticism pales in comparison to the intuitive and gentle nature with which he carries himself around every person he meets—especially the Prats’ 3-year-old daughter, Elena.

“I absolutely love the connection Carlos has with my daughter…That’s what makes me happy,” Prat said. “My daughter goes to school, so most of the time I’m by myself (riding). But every weekend she comes with me and loves riding him. Carlos can be a little rough sometimes when I bring food, but if it’s my daughter, then he’ll be the most gentle horse on the planet. He’s always gentle and playful with her. When she rides him, he would never do anything to hurt her. The fact that I can share something with my daughter is my favorite part of this journey.”

“I like that Carlos always finds a way to have a personal story with each of us,” Flavien Prat said. “First with me, then Manon, now Elena, and hopefully one day Lenny as well.”

Most recently, the Prat family made the move from Southern California to New York to support Flavien in his first season with the New York Racing Association. Until Carlos is able to join his family, Manon reports he is at a beautiful facility in Del Mar, Calif., in the care of a trusted trainer.

Once Manon Prat finds the perfect New York area barn for Carlos, he’ll make the trek to rejoin his forever family on the East Coast.

“The majority of racehorses—because they’ve been interacting and working alongside humans from the time they’re born—are really good with children and adults too,” O’Neill said. “The adults sometimes maybe aren’t receptive to it or understand it, but racehorses are 100% mirrors of whoever they come in touch with. Kids are innocent and open-minded, and horses reflect that.”

Click here to read the August 2022 Second Acts article in the BloodHorse for free.