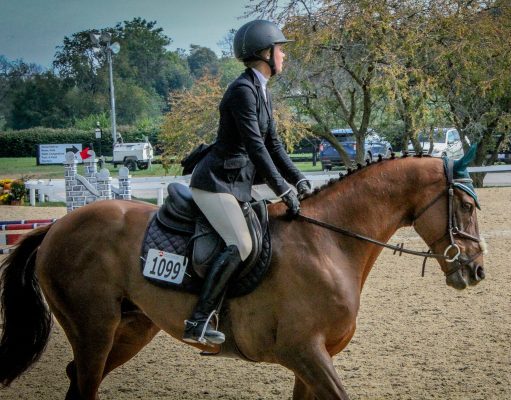 It was the spring of 2016 when K C Against World began his journey in the heart of the bluegrass. Bred by Kentucky-based Sun Valley Farm, the son of Verrazano was born on March 14 out of Tamdiid.

Later that year, K C Against World sold as a weanling at the Keeneland November sale for $34,000.

Trainer and pinhooker Trudy Vienot takes pride in her hands-on approach to horse care and racehorse training. So, when yearling student K C Against World developed a nasty case of cellulitis in his stifle, there was no doubt whether she would be in the clinic with him every day as he fought to get better.

“He’d lay on the clinic floor for days,” Vienot recalled. “The vet was afraid he would break the opposite leg and so we had to put an epidural in so he would stay in properly on his good leg. There were days I would go to see him in the clinic that he would not lift his head up off of the ground for a peppermint.” 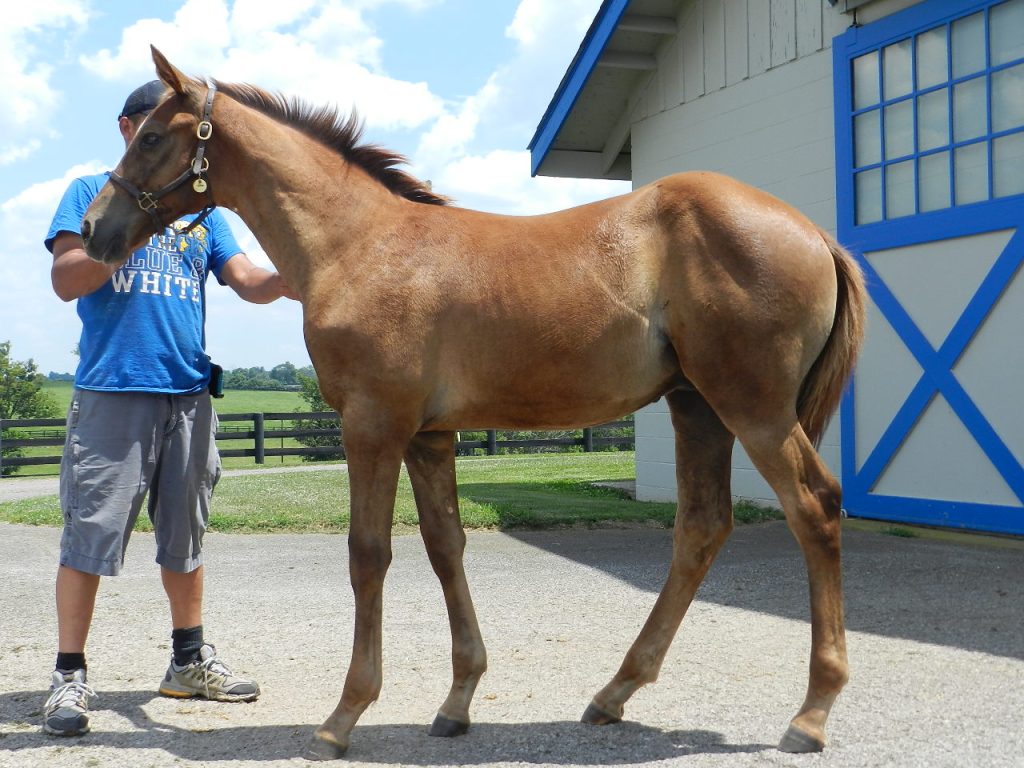 While circumstances seemed dark for the young colt, K C Against World managed to overcome his first big challenge—gaining back his health—and sold at the Keeneland September sale later that year.

Purchased by trainer Greg Foley for owner Jeffrey Mullins, K C Against World ran twice on the dirt at Churchill Downs before breaking his maiden in a turf race at Ellis Park in 2019. till, it would seem that racing wasn’t the right fit for the handsome chestnut and he ran just three more times before finding an old familiar face.

Vienot had been keeping tabs on K C Against World since his racing debut and called in a favor with another trainer to claim him in Indianapolis and bring him home to Lexington. K C Against World was back in the bluegrass on a brief sabbatical with a newfound friend— a miniature pony.

Vienot wanted to give K C Against World a second chance on the track, but those five and a half furlongs would be his last as a racehorse.

“The race came off of the grass, and it made me nervous to watch him run,” Vienot said. “I had them ultrasound the right front ankle and there was an old tear there.”

In need of a safe place to retire her now unemployed trainee, Vienot turned to her friend, Dr. Chris Lesbines, DVM.

Dr. Lesbines is a Thoroughbred breeder, owner, equine veterinarian at Arlington Park and Hawthorne Race Courses,  retired veteran, and also happens to be on the board of directors at TAA-accredited Out Side In— a Thoroughbred rescue, rehabilitation, and retraining program. It was there that Jennifer McVoy and her daughter Alexa entered K C Against World’s life.

The Executive Director of Out Side In, McVoy is a licensed master social worker, which is crucial at the Illinois-based organization where they not only work to rehabilitate and retrain retired Thoroughbreds, but also treat a wide variety of emotional, behavioral, and mental health issues in humans. McVoy and her daughter Alexa immediately took a liking to K C Against World, now known as “Owen.”

“There are just too many good things to say about Owen,” Alexa said. “It was like he came off the track just knowing he was going to be a great show horse. He has always been incredibly calm and willing to learn.”

It didn’t take long for McVoy to determine Owen would be the perfect partner for her to enter into the 2020 Retired Racehorse Project’s Thoroughbred Makeover.

“Like with any horse there were occasional setbacks, we were in absolute disbelief with how quickly he progressed,” McVoy said.

Unfortunately for the young team, 2020 came with its own uncertainties and the makeover was postponed.

“We were so disappointed when the 2020 makeover got canceled because we knew he had come so far in such a short amount of time,” Alexa said. “He was ready by July and we knew he had to be so much farther along than the other horses. We figured some of the other trainers were probably happy to have the extra year but we didn’t need it. He was ready to go.” 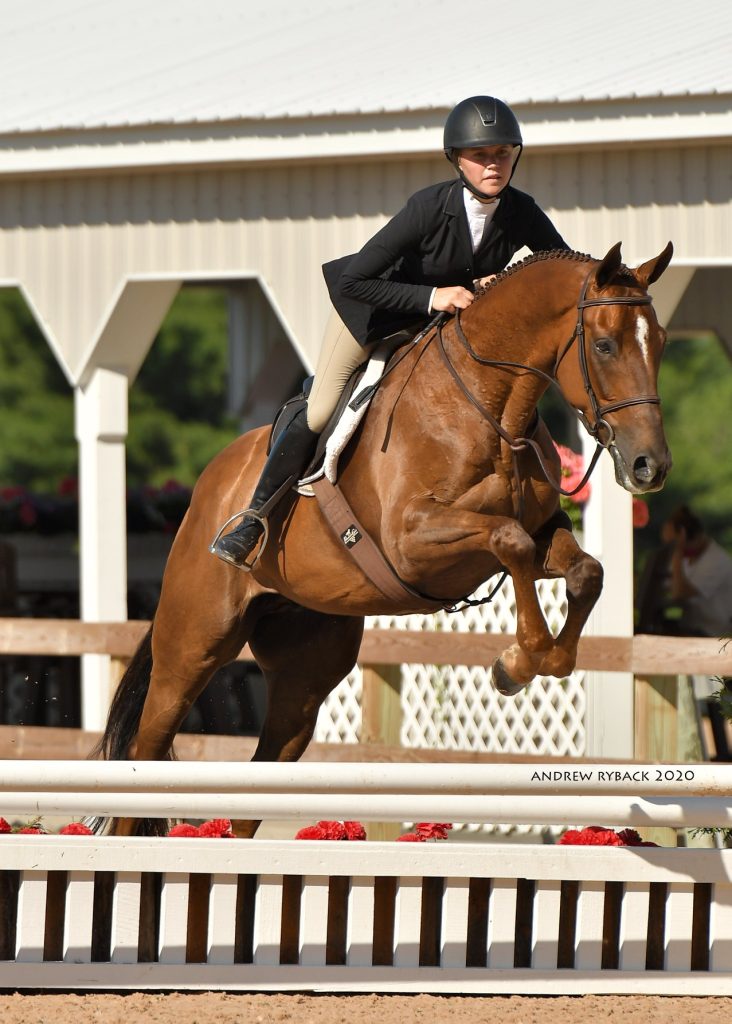 Although they didn’t need the extra time, they did amass a fan base for five-year-old Owen. While waiting for the 2021 Mega Makeover, Owen retrained with Alexa in the Hunter/Jumper ring, and also with Jennifer in the equine-assisted therapy ring.

“When he wasn’t being ridden, he was just as relaxed and sweet and was equally as good of a therapy horse,” McVoy said.

Owen’s own experience fighting for his life did not make him any less fearless or full of personality. Instead, his life experiences both in recovery and as a racehorse made him the ideal candidate for Out Side In’s Heroes for Horses program. There, veterans suffering from post-traumatic stress, transition stress, and other emotional and mental health struggles can receive equine-assisted therapy and a sense of community.

“As soon as he came off the track the veteran’s in the Heroes for Horses program started working with him to help him get adjusted to the new environment,” McVoy explained. “They liked to watch me work with him and see him progress so he has always had a big cheering section.”

When it came time for the 2021 RRP Thoroughbred Makeover—with his new support team behind them—McVoy and Owen took to the spotlight beautifully. Owen proved Alexa right in both the Show Jumper and Show Hunter divisions by finishing in the top 10 for Hunters and top 15 for Jumpers.

“I guess that is a testament to the value of Thoroughbreds,” McVoy said, referring to Owen’s versatility. “He’s been a racehorse, a show horse, and a therapy horse already, and he’s only 5 years old.” 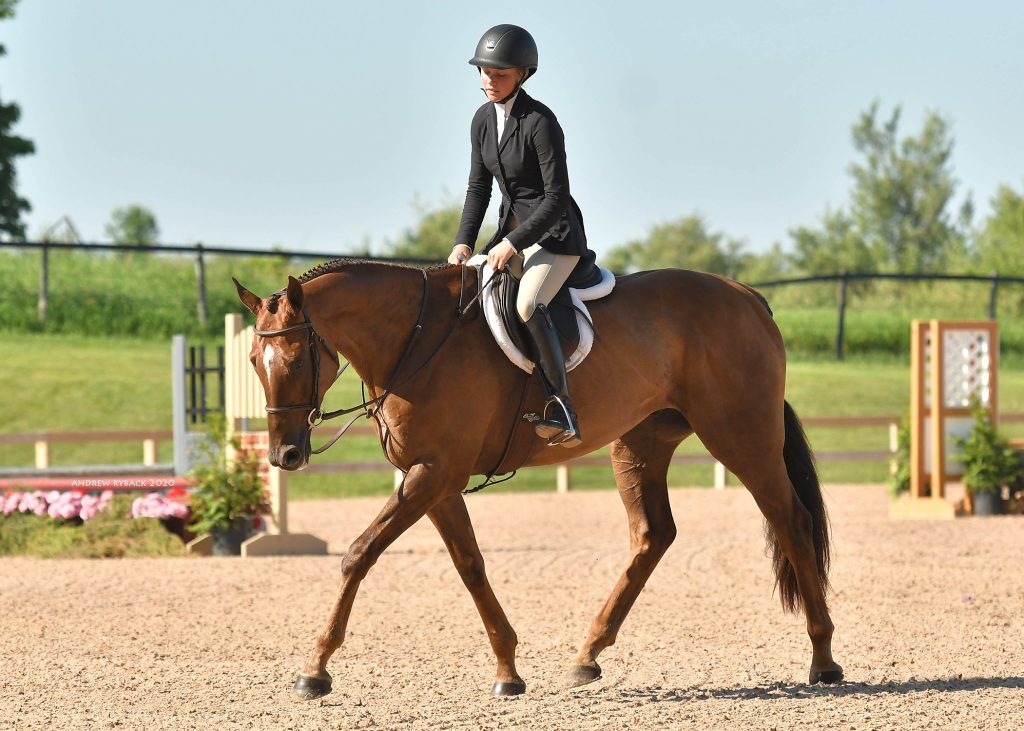