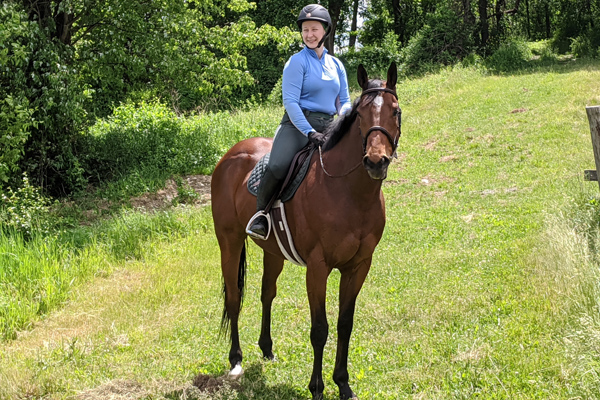 New York’s owners and trainers called on TAKE THE LEAD in record numbers during the organization’s 2019-20 fiscal year, which ended May 31, with 135 racehorses transitioning to second careers through the program. That smashed the previous mark of 98, which was set in 2016-17.

TAKE THE LEAD, which was created by the New York Thoroughbred Horsemen’s Association in 2013, also celebrated its 500th retirement last year, and hit the 600 milestone by the end of the term. The total number of TTL retirees now stands at 603.

The organization is under the umbrella of the TAKE2 Second Career Thoroughbred Program, which promotes happy and healthy lives beyond the track for retired racehorses. TTL works with the horsemen competing on the NYRA circuit to find homes for retiring racehorses with Thoroughbred Aftercare Alliance-accredited facilities.

The horses travel many different paths en route to aftercare. Uncle Sigh is a perfect example. The popular New York-bred was second in the Withers and Gotham Stakes in 2014, earning himself a trip to the Kentucky Derby. Fortune did not favor him on the first Saturday in May and he finished 14th, but he had a very productive career that saw him win seven of his 42 starts and $648,686. He made his final appearance at Belmont Park in September of 2019, running seventh, and owner Ronald Brown and trainer Chris Englehart decided it was time for the gelding to bid the racetrack goodbye.

Retired to TTL partner and TAA-accredited organization ReRun in January of 2020, Uncle Sigh enjoyed a couple of months under the care of ReRun’s Lisa Molloy before being adopted by Chelsea Crozier of New Jersey. The 9-year-old is now living the life on a farm in the Garden State.

“Even though ‘Sigh’ was a successful racehorse, he is actually a very slow and steady kind of horse to ride, almost to the point of being a bit on the lazy side,” Crozier said.

“He has been so much fun to get to know. At first he was aloof to everyone, but day by day we have slowly peeled away his tough guy exterior to find the goofy, inquisitive, and cuddly dude that he is. Each day he is learning new things about us and we are learning new things about him, such as he is very particular about the brand of peppermints that he will eat, and he finally has started taking regular horse treats.”

Crozier has not yet determined what second career might suit Sigh best.

“I am hoping to steer him towards being a Show Hunter, but I am in no rush,” she said. “Ultimately I will let Sigh tell me what he likes to do. So far he has enjoyed learning to trot over poles and a very small [less than 18″] ‘jump.’ With each ride he is showing such great potential to be an amazing competitor in the show ring.”

Nice Guy Stables’ Win the Shake had only three starts and a maiden win to her credit when she was retired to TAA-accredited New Vocations through TTL last summer. The New York-bred filly was given the time off she needed to recover from a knee injury, and found a new home with Dory Munder in South Carolina.

“‘Winnie’ astonishes us every day, with her brain, her willingness, her athleticism, her kindness,” Munder said. “I was realistic about looking for an OTTB that was suitable for me, as I’m in my 70s and had taken 50 years off from riding along the way. But I believe in the Thoroughbreds. I had one when I was young and I just knew there was one out there for me.”

Despite the age difference, the two have become fast friends.

“She has been absolutely beyond our expectations” Dory said. “She is amazingly smart and so sane for her age. She does notice everything, but the worst she will do is slow down or pause to check it out. She seems very balanced for a young horse, especially one so recently off the track. She has a wonderful swinging walk, and she floats at the trot. I don’t know whether showing will be in our future after this RRP Makeover year, but I feel confident that she is my unicorn and we will have many adventures together.”

The organization’s president and TAA board member, Rick Schosberg, is also the “boots on the ground” at Aqueduct, Belmont, and Saratoga, personally overseeing each and every retirement.

“The past year has been a true representation of how the New York horsemen and women have realized the full benefits of our TAKE THE LEAD Program,” Schosberg said. “The record number of retirees proves the ease of the process, and the high percentage of sound but ‘noncompetitive’ candidates show that the owners and trainers are indeed retiring horses earlier. This makes for decreased rehabilitation time and quicker adoptions for sound purposeful second careers.”

The horses are examined by veterinarians, who donate their time to the cause, to ensure they receive the R&R they need. TTL finds a suitable placement, gets all of the paperwork completed, pays transportation costs from the track, and makes a financial contribution to offset the cost of retirement. The TAA-accredited aftercare facilities provide the rehabilitation and retraining before putting the horses up for adoption. Adopters have to go through a rigorous application process before they are approved.

“It is incredibly rewarding to hear how happy our retired racehorses are in their new careers—and how much their adopters love them,” TAKE2 Executive Director Andy Belfiore said. “We are grateful to everyone who contributes to these success stories, from the owners and trainers and veterinarians at the track, to the aftercare organizations, to the wonderful Thoroughbred enthusiasts who provide them with their new homes.”