Soy Yo was rescued by the South Florida SPCA as a 4-year-old stallion with four broken sesamoid bones. The SFSPCA provided surgery for his injuries, gelded him, and rehabilitated and retrained him to prepare him for adoption into a loving permanent home.

South Florida SPCA was founded in 1992 in response to the need to provide horses with a safe haven from cruelty, abuse, or abandonment in the Miami-Dade Florida area.

It works with Miami-Dade Animal Services and responds 24/7 to local law enforcement requests to investigate cruelty and abandonment cases. The organization is often called in to seize suffering horses and bring them to the rescue ranch, where they are provided appropriate refeeding programs, veterinary and farrier care, as well as retraining to prepare them for a second chance in life.

The horses that the SFSPCA rescues, including off-the-track Thoroughbreds, are sometimes found in the worst conditions imaginable. It is not unusual for the horses to require extraordinary life-saving measures involving extensive veterinary care, a specialized refeeding program, as well as round-the-clock intensive care by staff and volunteers. The organization works closely with Thoroughbred owners, breeders, and trainers to ensure their horses in transition don’t fall into peril.

The fight on behalf of horses isn’t only performed at the rescue ranch. SFSPCA also has a Legal Task Force that assists when needed in prosecution of cruelty, as well as being supportive of legislation and other organizations’ efforts to eliminate illegal horse slaughter.

Many of the SFSPCA off-the-track Thoroughbreds have become beloved family horses as well as ribbon-winning show horses, consistently proving their versatility and adaptability. It is inspiring and gratifying to be able to offer such an amazing animal as an off-the-track Thorough- bred a chance at a new life.

The SFSPCA has a rigorous adoption application process. All applications are reviewed by the adoption committee and the organization considers matching horses to humans an important component to the future happiness of the horses. All horses that are adopted can be returned at any time without question. The SFSPCA’s family of volunteers, collaborators, supporters, and those who provide necessary funding all believe in its mission to rescue, rehabilitate, and re-home these magnificent animals. 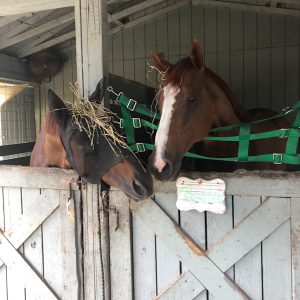 Red Button and Bringcheckcharlie – they’re both under the care of adopter Robin Johnson in Florida as they’re retraining for new careers. Read more >> 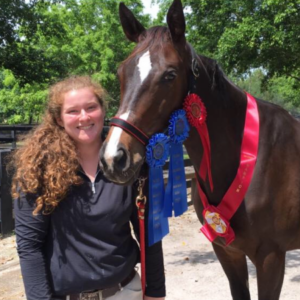 La Sheikh – She only had one win and three thirds, earning $16,656 in her 26-start racing career. But now she’s racking up show ribbons in her new life. Read more >>