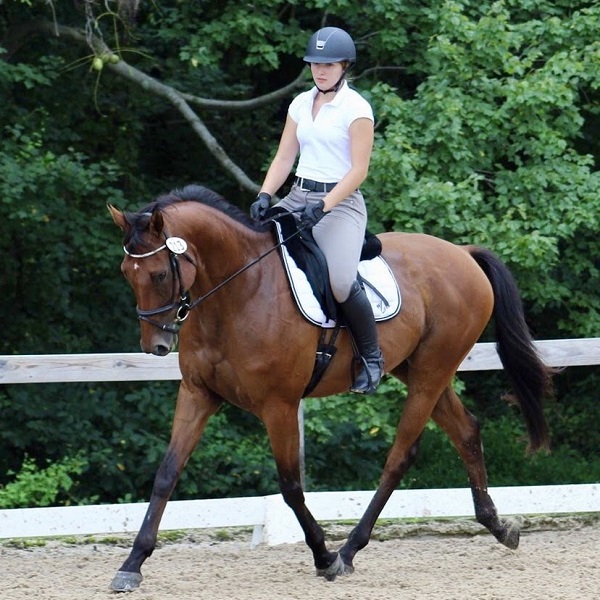 Tricky G made all 20 of his career starts in Louisiana and retired with a record of 3-3-3. In 2015 the son of Lunarpal was swiftly rescued from a Louisiana kill pen by MidAtlantic Horse Rescue. Tricky G spent the next year at the TAA-accredited organization rehabbing and preparing for his second career.

The earner of $37,670 was briefly adopted out twice, but was returned to the organization and was awaiting his forever home.

Enter Kayla Covolesky. She had her eye on a number of other horses, but was taken with this diamond in the rough who, despite his past, seemed to maintain his easy going nature.

“It was absolutely freezing the day I tried him–it was cloudy, windy, and we even had some snow flurries,” Covolesky recalled of the cold day in January 2018. “We really struggled to figure each other out our first ride, but he was so forgiving and was trying super hard despite all that was going on that day. I decided to give him another go a few days later and we just clicked. He was pretty green, and had some bad ground manners, but I could tell that with time and patience he would be super.”

Covolesky and Tricky G, now named “Gunner,” have had their highs and lows over the last three years, but Covolesky remained optimistic and provided the Louisiana-bred with the best of care.

“Gunner has been the best partner to bring through the levels of dressage,” she said. “Our first year showing training level we scored consistently in the high 60s and low 70s. He is such a super star in the show ring and always aims to please. Our journey hasn’t been the easiest, and we’ve hit a lot of roadblocks during our three years together. I’m so thankful for the great team of equine professionals that have worked closely with Gunner to keep him feeling great and in good hands.”

2020 provided an opportunity for Covolesky to get back to the basics and focus on Gunner’s foundation. They are currently schooling First and Second Level movements with intentions of making their First Level debut in 2021.

“I would love to earn my USDF Bronze Medal on Gunner,” Covolesky said. “I have always wanted to train my own horse from the ground up, and gain whatever experience I can. Gunner has been through so much in his life, and has a lot of baggage from bad things that have happened to him.

“If for some reason Gunner cannot perform to the top levels, just having him as a companion would be enough for me,” she added. “His personality has come out full force since I got him, and he’s so confident now compared to the anxious, unsure horse he was. I have gained so much knowledge from Gunner and our experiences as a pair.”