On Feb. 24, 2013, Heather Wiley helped deliver the last foal born at Dare to Dream Farm that year. The foal was a son of Silver Tree out of the With Approval mare Wings of Approval.

Wiley kept tabs on the horse, now named All Hundreds, as he ran in the claiming ranks at Gulfstream Park and Gulfstream Park West throughout his 3- and 4-year-old seasons. Throughout 2018 and into 2019, he moved between Tampa Bay Downs and South Florida. And on May 4, 2019, he was claimed out of a Tampa Bay race and relocated to Camarero Race Track in Puerto Rico, making his next start a month later. Wiley continued to watch from afar as he ran regularly in claiming races at Camarero.

Through a mutual friend, Caribbean Thoroughbred Aftercare‘s Kelley Stobie was introduced to Wiley and knew she was trying her best to keep tabs on his whereabouts. When All Hundreds was retired in March of 2020, Stobie let Wiley know she had the grey gelding at her TAA-accredited organization, and arrangements were made for him to begin his quarantine and travel back to Wiley on the mainland. The gelding finished his career with a 7-7-7 record from 42 starts and $93,400 in earnings.

All Hundreds as a foal

Now, Wiley and All Hundreds are happily reunited as they begin the next chapter in their lives, which will be filled with many trail rides.

“He is doing wonderful,” she said. “A real sweetheart as always.” 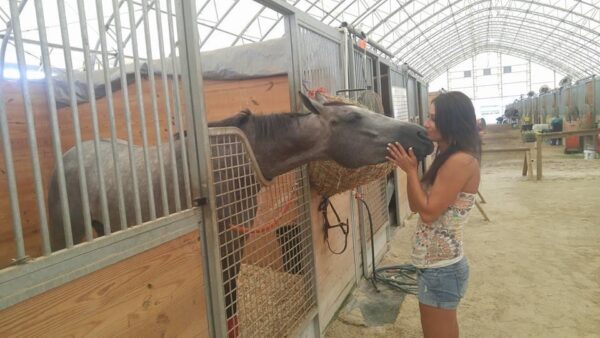