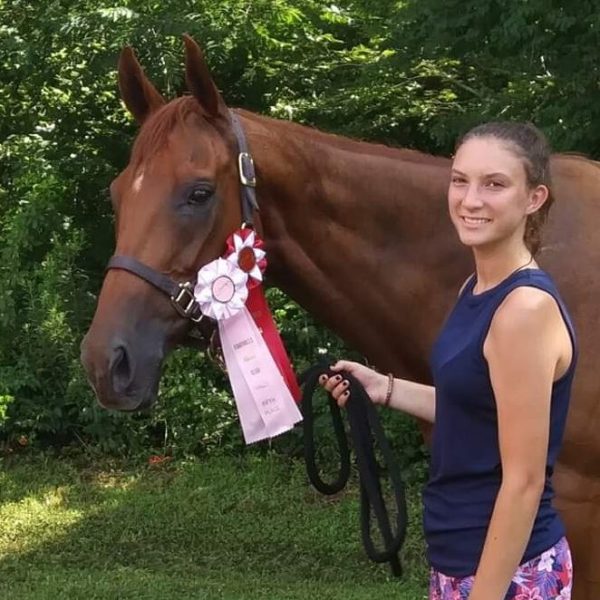 One Nice Rae ran just six times at Parx Racing for owner Valley Forge Stables before retiring with a record of 1-0-0 and earnings of $23,060. Bred by IWIN Farms LLC, John Gambone, and Preferred Pals Breeding Company of New York; despite not having the inclination for racing, One Nice Rae had a stunning conformation and stood at a whopping 17.1 hands at just three years old.

The Allen Iwinski trainee made it clear that life on the track was not for him, so One Nice Rae was purchased off the backside by a young woman hoping his tall stature would make him an ideal prospect for the jumper ring. However, after going through the reschooling process, the son of One Nice Cat displayed little interest in jumping either.

Now, in need of another horse to pursue her goals, but wanting to ensure he went to a good home— One Nice Rae’s owner turned to Dayle Eldredge in South Carolina. The founder and president of Thoroughbred Aftercare Alliance (TAA)-accredited Second Wind Thoroughbred Project; Eldredge has been rehabilitating, retraining, and rehoming off-track Thoroughbreds for 35 years. When she was approached about the opinionated chestnut gelding who needed a fresh start, she agreed to take a look.

“Her trainer had heard about our program and contacted me about [One Nice Rae],” Eldredge recalled. “I went and looked at him, watched her ride, and we agreed to take him on. He had such a great personality and seemed like a misunderstood horse.”

One Nice Rae spent several months with Eldredge and the team at Second Wind before he was ever advertised as adoptable. The TAA-Accredited organization takes pride in not rushing their horses and works hard to take into consideration every aspect of each Thoroughbred’s personality and capabilities when making assessments. The New York-bred was no exception to this procedure.

Meanwhile, David Robinson had a dilemma of his own— trying to find his daughter, Caroline, a new low-level dressage partner after the lease of another horse didn’t work out. Robinson had spent considerable time online searching for an off-track Thoroughbred (OTTB) when he came across One Nice Rae.

“I found One Nice Rae on Equine.com with a video,” Robinson said. “I continued searching but kept going back to this horse. I eventually showed the ad video to Caroline and her eyes lit up.”

After speaking on the phone with Eldredge and having their adoption application accepted, both father and daughter made the five-and-a-half-hour drive across South Carolina to Second Wind. They pulled into their hotel late Friday evening and Caroline was so excited for the next day. She watched the video of One Nice Rae several times before falling asleep.

The following afternoon, the Robinson’s arrived at Second Wind ready to meet a certain striking redhead.

“We had been told that he was big at 17.1 hands, but I didn’t really realize just how tall that is,” Robinson said. “When I saw him, my first thought was, ‘If she falls it is a long way to the ground.’”

Nevertheless, an eager Caroline swung her leg up on One Nice Rae for a test ride. Originally hesitant about Caroline’s lack of experience, Eldredge’s doubts were eased once she saw the two together.

“When the Robinson’s daughter rode him, I was skeptical at first,” Eldredge admitted. “She was not a very confident or experienced rider, but One Nice Rae was very quiet and took good care of her.”

On the other hand, David knew almost immediately One Nice Rae would be making the trek back home with them.

“Caroline had a glow in her face, she was wide-eyed, and grinning from ear to ear,” he said. “I knew then he was going home with us.”

The very next day, they pulled out of Second Wind trailer-in-tow with their newest OTTB family member inside. One Nice Rae, now known as “Canyon,” was going home. 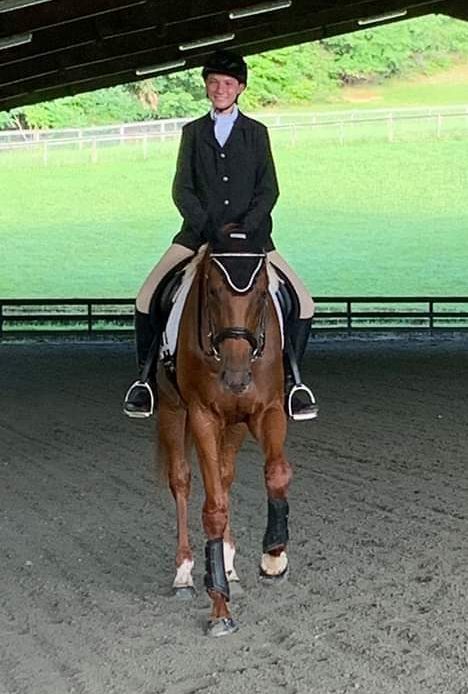 Since adopting Canyon back in 2018, Caroline competed in a few dressage shows and participated in clinics, but like the rest of the world, the pandemic had slowed down everything. While awaiting the next competition season, Canyon and his best pal Caroline have taken an interest in trail riding around the farm where they board.

Upon encouragement from Eldredge, the pair has their sights set on qualifying to compete at the Thoroughbred Incentive Program Championships in Aiken this October.

“The main thing is that he is happy, healthy, and understands that he is loved dearly,” David said. “These OTTB’s are sweet souls that deserve to be loved and wanted.”

Although the team at Second Wind was sad to see Canyon go after bonding with him for so long, they could not be happier to see him thriving in his new home.

“The Robinson’s are just the kind of people you hope adopt all of your horses,” Eldredge said. “They really love him and he will have a home for life.”