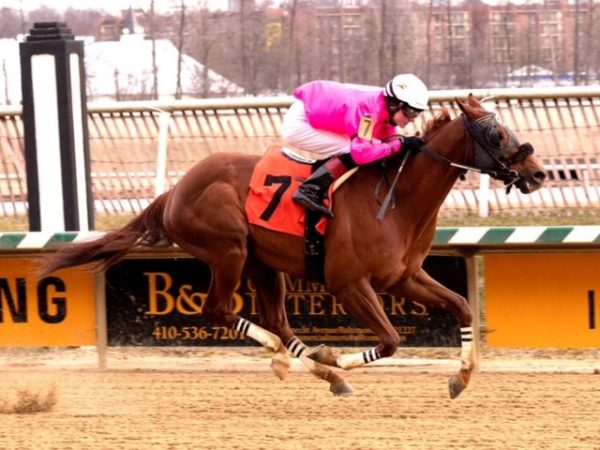 The homebred son of Super Saver, Totalitario made his racing debut as a three-year-old at Finger Lakes Racetrack for Dr. Rafael Lopez, under trainer Rafael Rohena. After breaking his maiden at Laurel Park as a four-year-old, the Kentucky-bred was claimed by Erin McElwee, the Maryland Jockey Club director of facilities.

“I took a job for The Maryland Jockey Club in 2017 and started a string here with trainer Kieron Magee,” McElwee said. “Kieron’s wife, Kelly called me one day about a horse she liked that was entered the next day. I saw he ran in New York and was going short but when they brought him to Maryland, they tried him long and he seemed to like that better. At the time I didn’t have any horses so I figured why not, this will be fun. The day I claimed him he won and I was so excited to see the progression he was making.”

McElwee recalled meeting Totalitario, or “Toto,” for the first time. The chestnut gelding surprised her in more ways than one, but what surprised her most of all was his big, yet easy-going personality.

“Toto has two personalities: Toto the lazy wanna be pony horse and Totalitario the competitive racehorse,” McElwee said. “As soon as he was in the paddock he was different. I remember looking at him and thinking– wow I might get second or third today. We ended up winning that day with one of the most confident horses I will ever own. He even almost set a track record that day, he ran 1:34.77 and the record is 1:34.2.” 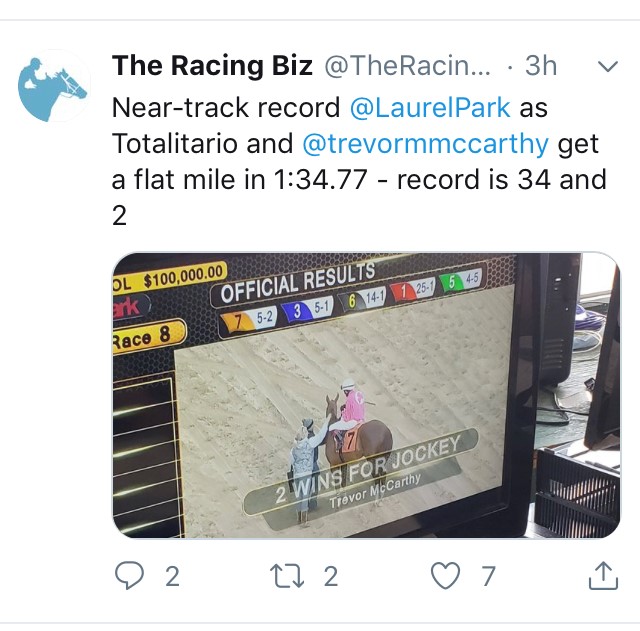 McElwee and Magee saw Toto through 2019 and the beginning of 2020 before he started to show signs of losing interest in his job. Instead of being eager for morning workouts, Toto preferred socializing at the gap and ponying horses back and forth. McElwee knew the racing chapter of his life was coming to a close.

“At the end of the two years we saw his interest decline,” she said “He would want to stay with the ponies and outrider more and more in the morning. He would run a good race and then not try the next. I knew the time was coming for his retirement. So I talked to Kieron and Kelly and we made the decision to retire him.”

McElwee and Kieron made the decision to retire Toto to Thoroughbred Aftercare Alliance (TAA)-accredited Foxie G Foundation by way of Beyond the Wire with a race record of 4-7-3 and earnings over $122,000.

McElwee’s decision to retire the gelding sound and healthy provided Toto the opportunity to start a new career, but McElwee worried for her beloved four-legged friend all the same and was intent on keeping a close eye on him, wherever his next career may take him.

“Owning a racehorse is the most expensive but rewarding experience of someone’s life if they embrace it,” McElwee said. “Retirement is part of their career and as an owner you always need to be emotionally and financially preparing for it. The key is to retire them when they will be set up for success in the transition. As an industry there are so many great programs out there to assist in their retirement. But as responsible owners we need to complement that with fiscal and medical support.” 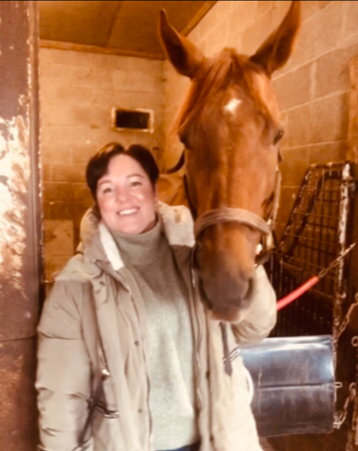 In March 2021, Christine Cook was working as a nurse on the front lines of the pandemic when she got a call from the Foxie G Foundation founder, Laurie Calhoun. Calhoun knew prior to the pandemic Cook had been interested in competing in the RRP Thoroughbred Makeover on a Foxie G Foundation horse, and she had the perfect one in mind for Cook.

Despite being overwhelmed by the stress of working in healthcare during the pandemic, when Calhoun insisted she had found her ‘the one,’ Cook could not resist the temptation.

“She said I really needed to meet [Totalitario],” Cook recalled. “I was immediately enamored with his athleticism and work ethic, and eventually fell completely head over heels for him.”

Cook adopted Toto, and shortly thereafter the two began his retraining. Over the summer, the pair won champion at Toto’s first hunter show and went cross-country schooling at Fair Hill in preparation for the fall. When October–and the RRP Thoroughbred Makeover–came, it was time to showcase the culmination of their training. Cook entered Toto in both show jumping and eventing. Between the two divisions, they would compete against over 100 other Thoroughbreds. Cook recalls feeling nervous and worried about letting her new partner down in such a large atmosphere.

“I did not ride my best, but he took me around the ring and remembered everything I taught him,” Cook said. “I sort of broke out into tears a little while exiting the ring because I was so proud of him.” 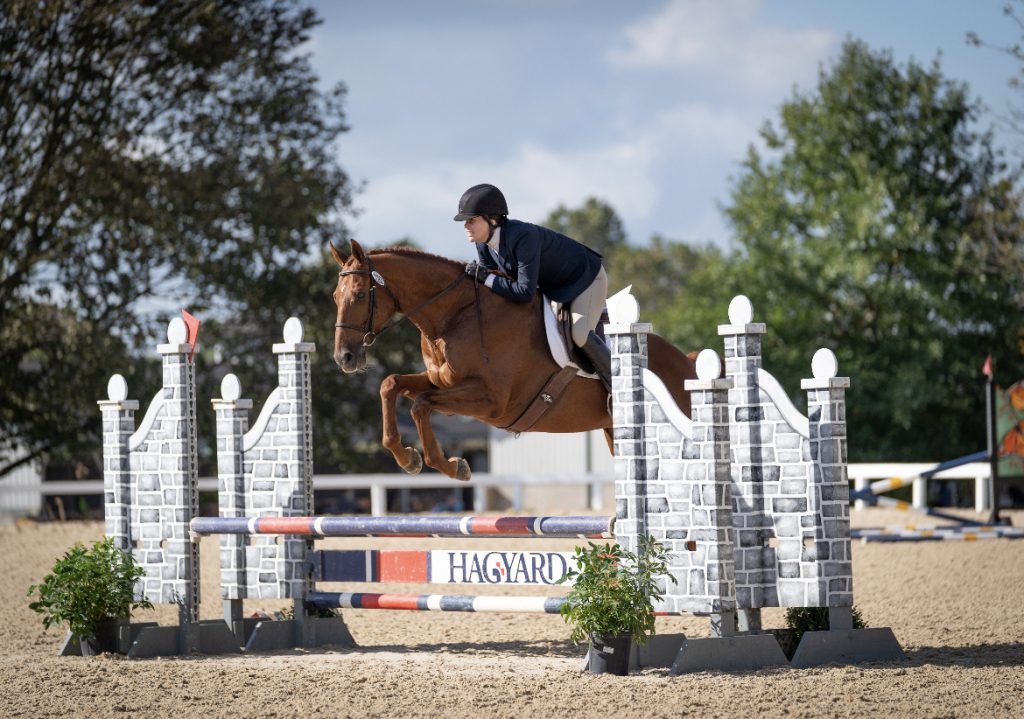 Her faith in the gelding was well placed as they ended up finishing the makeover as the third highest amateur in show jumping.

“Toto is absolutely wonderful,” she said. “I have worked with so many Thoroughbreds that I’ve loved, but after a year into our partnership I still feel giddy whenever I even think about [him].”

Looking to the future, Cook plans to explore just all that Toto is capable of. Her years of experience with Thoroughbreds has proven the versatility of the breed, so she and Toto will continue training and competing in jumpers, eventing, and show hunters, but will also begin fox hunting next season– a challenge she is excited to tackle.

“I love Toto so much,” she said. “He always challenges me and I know that if I put in the work he’ll be there for me when I need it.” 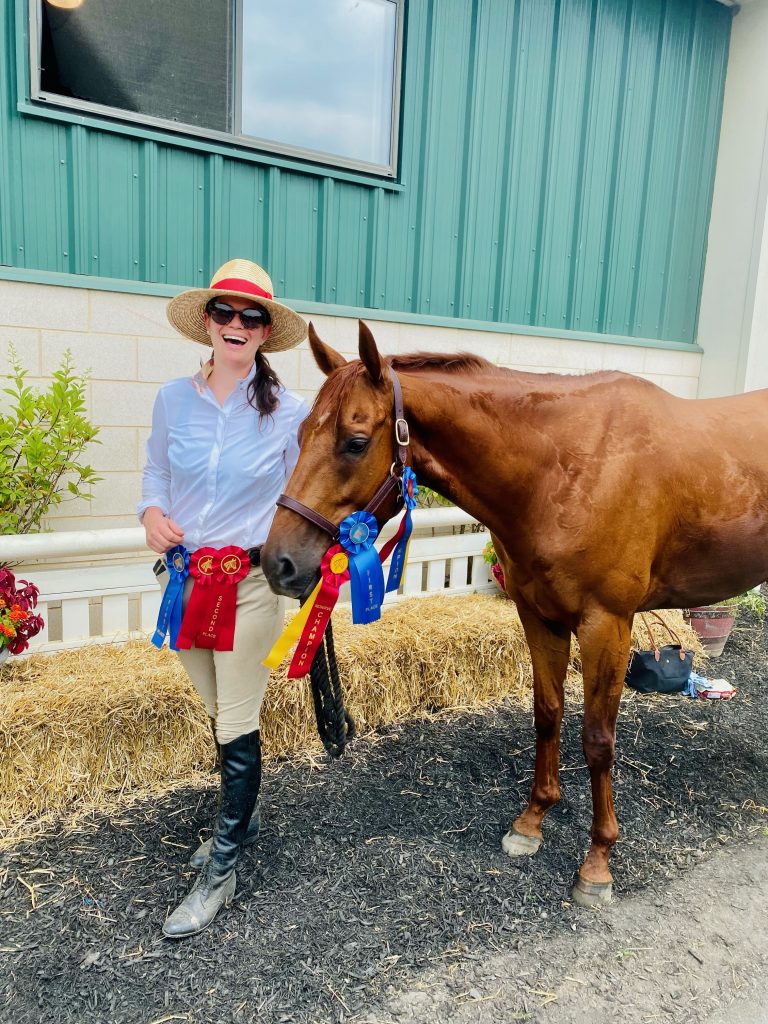