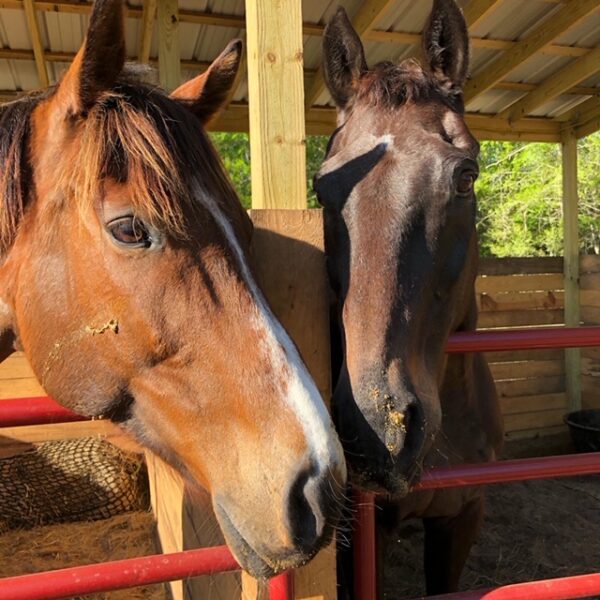 The mid-2000s was a strong era for the Chronicle of the Horse‘s online forum. Those involved in English riding disciplines who were online often found themselves there to discuss horses, competitions, trainers, gossip, or really anything.

A subject of one 2006 thread on the Chronicle message board was Pardner, a dark bay son of Deputy Minister who visited the winner’s circle eight times in a career that lasted 28 races through three seasons ending in 2003.

The thread detailed how Pardner ended up at New Holland through an off-track owner, where he was pulled out by Bev Strauss of TAA-accredited MidAtlantic Horse Rescue in one of her weekly runs to the pen. Strauss’ original message said that, through the grapevine, she heard that the horse was rehomed to an eventer off the racetrack but was dumped after an unsuccessful eventing competition where he refused to jump. With no more available room at her facility, Stauss worked with Akindale Thoroughbred Rescue (which also holds TAA accreditation) to take the horse.

As the thread blew up in 10 pages of discussion, many people started to take notice and wanted to find a good home for the horse. Lori Reed was made aware of his situation from an equestrian friend, and she soon scooped him up.

“A local friend here in South Carolina saw his story and had him shipped to South Carolina where I adopted him in October 2006,” Reed said. “They had started calling him ‘Castaway,’ barn name ‘Wilson,’ and that’s how he’s been known since. He’s made all my little girl equestrian dreams come true.”

Their connection was immediate, which Reed credits to “Castaway’s” class.

“He’s made all my dreams come true,” she said. “We’ve hit the beach, done a trail clinic at the Biltmore for four days, done eventing clinics, dressage schooling shows, and tons of trail rides. He’s a very proper guy that’s very regal and takes good care of and loves his people. He’s as solid as it comes.” 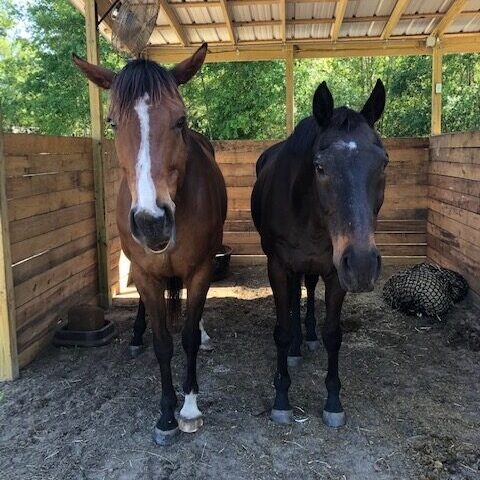 L to R: Wire Me Rockin and Pardner

Now at age 22, he’s living the good life in retirement at Reed’s farm (named Pardner’s Run), where he will still participate in an occasional trail ride. While Reed was happy hitting the trails with her heart horse, she began looking for another mount. She kept in touch with Strauss and Akindale’s Heather Carlson, and had tried a few with Carlson in South Carolina, but never found one that clicked. Until she got a call from Carlson in July of 2019 saying that she had the perfect horse for her.

Wire Me Rockin, a Louisiana-bred son of Wire Me Collect, ended his 10-race career with his only win in 2014. Where he went after the track is unknown, but he ended up at the now-defunct ICareIHelp, a controversial rescue organization that ended with its founder violating state charity laws and a prominent figure of the organization pleading guilty to eight counts of animal cruelty. Along with another horse, Wire Me Rockin was picked up by Strauss and sent to Carlson in South Carolina.

Despite his previous situation, Wire Me Rockin was a personable horse that Reed knew she’d end up taking home.

“He is lightly restarted, and now that we’ve all settled in at home, he will be doing lower-level dressage and trails,” she said. “He’s seriously the biggest goober. He acts like a 4-year-old still, and so we will be doing lots of ground work and light saddle work and field trips to help him learn to be a chilled out and confident guy.” 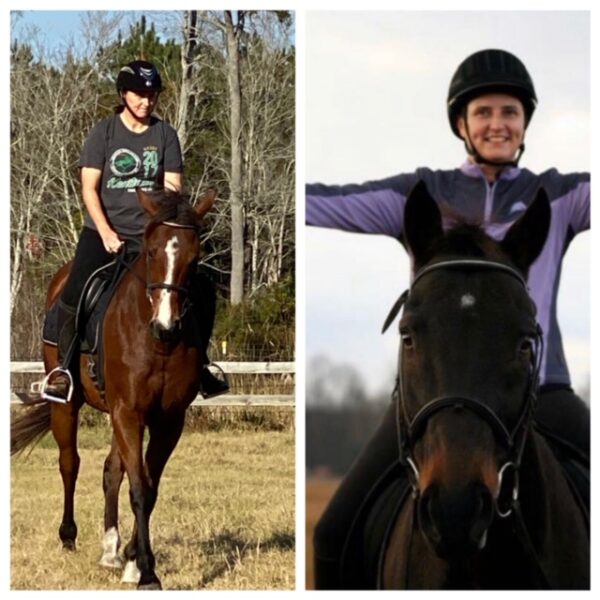 L to R: Reed on Wire Me Rockin and Reed on Pardner

The two OTTBs, now renamed “Wilson” (Pardner’s Run) and “Rawls” (Wire Me Rockin), are living the good life at the farm.

“I named him ‘Rawls’ to go with Wilson. Wilson Rawls is the author of ‘Where the Red Fern Grows.’ I have hounds and wanted to also pay tribute to them and his ‘musical’ name, so ‘Rawls’ after Lou Rawls as well,” Reed said.

“They are quite the pair. As different as night and day in personality and keep each other on their toes.”

Proud of the horses she calls her own, Reed gives a lot of credit to her hardworking friends who help Thoroughbreds day in and day out.

“Bev (Strauss) is the best,” Reed said. “She has worked tirelessly over the years to save these majestic creatures and I am honored to call her and Heather (Carlson) friends.”