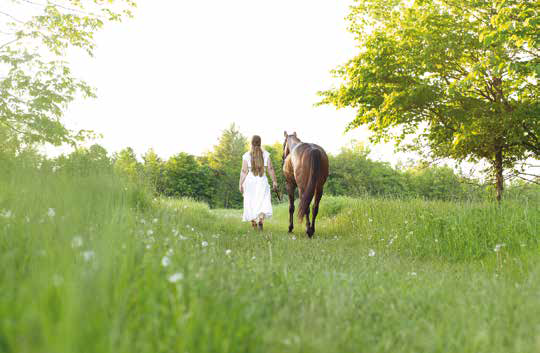 The relationship between Impressive Edge, a graded stakes-placed runner, and Lauren Edwards typifies the close, loving bond that develops between horse and adopter.

Impressive Edge, a 2014 son of Harlan’s Holiday, started 11 times, winning twice and placing third in both the Grade 3 Iowa Derby and Grade 3 Peter Pan Stakes. He earned a total of $160,746 before a minor tendon injury dictated his retirement. He was sent to LongRun courtesy of owner NK Racing and trainer Roger Attfield.

The $400,000 price he commanded as a 2-year-old at a sale in Florida speaks to both his beauty and talent. A wonderful mover, Impressive Edge impressed our great farm crew while undergoing basic retraining once his rehab was complete, and he quickly caught the eye of young horsewoman Lauren Edwards, of Ottawa, Ontario, who adopted him in January 2019. Edwards reports that he is a barn favorite, loves cuddles, and that she couldn’t be happier with him.

Impressive Edge is one of more than 1,000 retired Thoroughbreds that LongRun Thoroughbred Retirement Society has helped enjoy a happy and dignified retirement, either through adoption, rescue, financial assistance, or thirdparty placements via networking, since being granted charitable status in 2000. LongRun, the first formal Thoroughbred retirement program in eastern Canada, has been very fortunate in being given generous support from not only Ontario’s racing community but also from both the Thoroughbred Aftercare Alliance and Thoroughbred Charities of America.

LongRun deals mainly with runners recently retired from the racetrack and has its main office conveniently located on the backstretch of Woodbine racetrack near Toronto. LongRun’s retirees were initially cared for by a number of sanctioned foster farms in and around the metropolitan Toronto area but, thanks in large part to a very generous bequest from the late Lana Hershelle Sniderman, the bulk of our horses — we generally care for 50 at a time — moved to a beautiful 100-acre, 46-stall farm in Hillsburgh, Ontario. This centralization has made viewing of potential adoptees much easier.

The farm with its large indoor arena enables LongRun to hold equine assisted therapy and educational programs in partnership with Woodbine and also serves as a public showcase for some of Ontario’s racing stars. These programs not only help people experiencing challenges in their lives but also give a sense of purpose to those four-legged retirees whose age or infirmities dictate a life of sanctuary at LongRun. 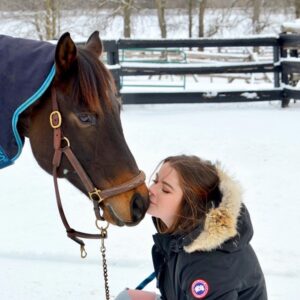 Impressive Edge – multiple graded stakes-placed son of Harlan’s Holiday had a record of 2-0-3 and earnings of $160,746 before being retired. Read more >> 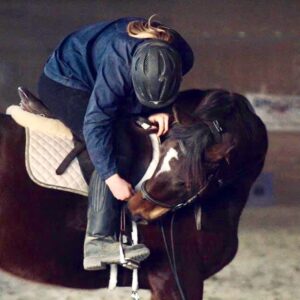 Queen’s Honor – The Kentucky-bred daughter of To Honor and Serve never broke her maiden but she’s now finding her calling outside racing. Read more >>